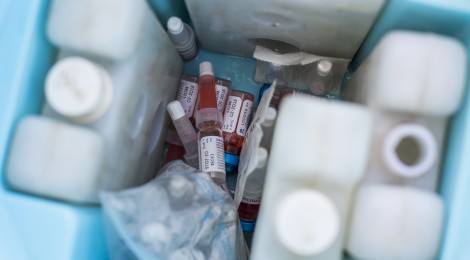 In July 2015, the state of California experienced an unexpected measles outbreak in its Disneyland theme park, infecting 131 Californians. This case shocked many, because the United States Center for Disease Control (CDC) announced in 2000 that measles had been eliminated.[1] The CDC attributed the elimination of measles to the highly effective measles, mumps, and rubella (MMR) vaccine. The MMR vaccination rate in 2000 was about 90.5% for students entering kindergarten in the United States.[2] However, since 2000, vaccination rate has declined, in part due to a small group known as the anti-vaccination movement.

Despite nearly unanimous scientific evidence to the contrary, some “anti-vaxxers” believe that vaccines may be linked to autism. Others refuse vaccinations because their faiths reject various forms of medical care, believing that they should be healed by God and through prayer. As children born to members of the anti-vaccination movement reach school age, parents’ anti-vaccination positions come into direct conflict with vaccination laws that enforce school-entry vaccination mandates. These policies require that a child receives certain vaccinations before enrolling in class. This mandate is designed to mitigate the risk of young children spreading serious, preventable diseases such as measles, mumps, and rubella, as well as diphtheria, tetanus, and pertussis.[3] Still, many states allow for exemptions that permit parents to enroll unvaccinated children if they can prove that such a vaccination would be harmful to the child’s health, or that a vaccination runs counter to their religious or philosophical views.

In response to the 2015 Disneyland measles outbreak, California eliminated the religious and philosophical exemptions to its school-entry mandate with the passage of SB277 in July 2015.[4] Prior to the introduction of SB277, California had allowed broad religious and philosophical exemptions to the vaccination mandate, causing exemption claims to more than quadruple from 2000 to 2014.[5] The increase in vaccination exemption claims is a national phenomenon, resulting in vaccination rates as low as 81.7% for the measles, mumps, and rubella (MMR) vaccination, and 80.9% for the diphtheria, tetanus, and pertussis (Tdap) vaccination among children entering kindergarten in Colorado.[6] In fact, nine states have vaccination rates below 90%[7], an important threshold for public health. At rates below 90%, herd immunity—a collective immunity established by the lack of viable carriers of contagious disease—breaks down, putting those individuals who need a medical exemption to vaccination at risk.[8] In Mississippi, which has the nation’s highest vaccination rate of more than 99.7% for both vaccines, levels of personal and herd immunity are high.[9] While California’s decision to limit vaccination exemptions is a clear victory for public health, is it legal?

California’s new law is sure to face legal scrutiny from its opponents. Advocates for parental choice argue that the lack of religious exemption violates the First Amendment’s protection of religious freedoms, as the decision not to vaccinate is an expression of their religious practice, which should not be infringed upon by law. Further challenges appear at the state level, as parents argue that requiring vaccinations for school enrollment violates their children’s right to an education, which is protected by California’s State Constitution.[10]

However, existing precedent at both the federal and the state level firmly supports the narrowed guidelines set forth by SB277. The most relevant precedent to restrict religious exemptions comes from the Supreme Court’s 1944 decision in Prince v. Massachusetts, which ruled that the government may place limitations on a parent or guardian’s right to religious freedom in order to protect a child’s welfare. While this case did not explicitly involve vaccinations or other issues of public health, it concerned the same tension between existing law, parental choice, and religious freedom. Sarah Prince, the guardian of nine-year-old Betty Simmons, had been charged with violating a Massachusetts child labor law stating that no girl under the age of 18 could sell goods on a public thoroughfare. Prince had supervised Simmons while the girl, a minister of the Jehovah’s Witness religion, distributed religious pamphlets in exchange for voluntary contributions.[11] Prince challenged the Massachusetts child labor statute claiming that it violated her First Amendment right to free exercise of religion and her Fourteenth Amendment right to equal protection as Simmons’ guardian. In a 5-4 decision, the court ruled in favor of the state, asserting that while such a statute would be unconstitutional if applied to an adult, the state had a responsibility to protect the welfare of a child.[12]Justice Rutledge wrote in the majority opinion that parental choice is not without limitation, given that children do not share all the rights of adults. He also further addressed the limitations of parental religious freedoms with respect to child welfare and health, writing “the right to practice religion freely does not include the right to expose the community or the child to communicable disease or the latter to ill-health or death”.[13] Rutledge’s statements serve as clear precedent supporting restrictions on vaccination exemptions, and would undoubtedly be cited in defense of the California law.

Existing precedent also supports California’s right to impose a school-entry vaccination mandate in its public schools. Opponents may claim that requiring vaccinations creates a barrier to education rights, which is protected in 16 state constitutions, including California’s. For example, the New York State Constitution provides that “the legislature shall provide for the maintenance and support of a system of free common schools, wherein all the children of this state may be educated,” elevating education to a fundamental right, as is the case in California.[14] As could be expected in an upcoming challenge to SB277, in 1904 New York’s school-entry vaccination mandate was challenged as an obstruction to a student’s right to education. In Viemeister v. White, President of the Board of Education the New York Court of Appeals ruled in favor of the state, finding that “the right to attend the public schools of the State is necessarily subject to some restrictions and limitations in the interest of public health”.[15] Here, as in Prince v. Massachusetts, the courts recognized the interests of the community and public health as legitimate justifications in the defense of vaccine mandates.