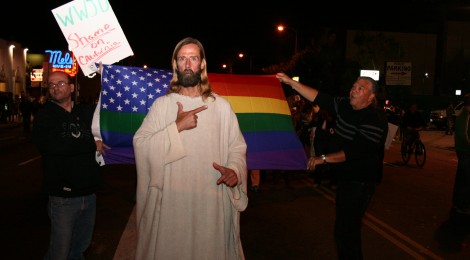 In March of last year, the state of Indiana enacted a statewide version of the Restoration of Religious Freedom Act (RFRA) that was met with intense public opposition. RFRA – originally enacted as a federal law in 1993 – asserts that even laws that do not specifically target members of a religious minority could have the effect of restricting or placing a burden on their ability to practice their faith. Accordingly, RFRA gives religious citizens a legal mechanism through which they can seek religious accommodations even for such “neutral” laws.[1] While public debate around this law focused on the negative effects certain aspects of the law might have for same-sex couples, examination of this debate reveals much about how public and legal perceptions surrounding religious accommodations have shifted.

Indiana’s legislature included businesses and corporations in a list of those who could receive such religious exemptions under their state’s RFRA. Since Indiana had no statewide anti-discrimination legislation for LGBTQ individuals, such a law would conceivably allow businesses owned by religious individuals, such as flower shops and bakeries, to refuse to provide flowers or cater a gay marriage ceremony, as it would force them to act in violation of their religious beliefs.

Public opposition followed almost immediately after the bill was signed into law. Within weeks, dozens of businesses, musical acts, entertainers, and even mayors and governors cut ties with Indiana and called for a boycott of the state. Bending to this immense public pressure, Indiana legislators added a clause protecting the rights of LGBTQ Indianans.

The types of clashes between same-sex couples and religious citizens that fueled this debate are not merely theoretical. Examples of such conflicts have arisen in several cases throughout the country already. For instance, in New Mexico, the State Supreme Court ruled that a private photography business run by an evangelical Christian husband and wife was not allowed to turn away a same-sex couple from their store. Treating the gay couple differently on the basis of their sexual orientation would be a violation of New Mexico’s Human Rights Act. Though New Mexico has a RFRA, the Court ruled that religious accommodations were only covered when the party placing the burden on the religious observer was the state of New Mexico itself.[2]

A similar case occurred in Colorado, where a Christian baker refused to provide a cake for a gay couple’s wedding. The couple sued on grounds of discrimination. Ultimately, the baker and his employees were ordered to undergo a toleration training session and provide a cake for a gay couple’s wedding. The baker appealed by citing his right to accommodations for religious beliefs, out of concern that taking part in a gay wedding by providing a cake would imply endorsement of that wedding. However, his plea was denied. The Colorado Court of Appeals ruled that making and selling a cake for a gay wedding “does not necessarily lead an observer to conclude that the bakery supports” the content of that ceremony.[3] According to the Court of Appeals’ reasoning, that baker and others in similar situations would not be entitled to First Amendment protections.

Ironically, some of the same logic applied to these cases acted as the impetus for the original, federal RFRA, upon which these state versions are modeled. In 1990, the United States Supreme Court ruled on Employment Division v. Smith. The case involved two men – both members of the Native American Church – who ingested peyote as part of a religious ritual. Oregon law held that peyote was illegal to own at the time, and, upon being found out, the men were subsequently fired. The men applied for unemployment benefits, but were denied as they had been terminated due to “misconduct.” The men sued the Employment Division, insisting that refusal to grant them unemployment benefits violated their ability to exercise their religion freely.

The Supreme Court ultimately decided against the two men. Oregon’s Employment Division was entitled to deny the men benefits, because their termination was justified, as Oregon’s ban on peyote was constitutional. Even though that law had consequences that restricted certain Native American worshippers from performing their religious rituals, the law did not violate their right to free exercise of religion. The Court ruled in this case that laws who “incidentally” target religious groups are not unconstitutional. Writing for the majority, Justice Antonin Scalia claimed that any “neutral, generally applicable law” was not in violation of the Constitution’s Free Exercise Clause.[4]

This narrow application of the Free Exercise Clause prompted a public uproar. In earlier cases, the Court tended to follow a rule it set out stating that free religious exercise ought to be protected from laws that inhibit them – general or not – unless there were a government interest “of the highest order” which could not be “otherwise served.” The public perceived this new judicial direction as severely weakening citizens’ claim to religious accommodations. To quell their concerns, both houses of Congress passed the original RFRA with near unanimous approval. When the federal RFRA ruled as overreach of federal power and thus unconstitutional by a later Supreme Court ruling, many states passed their own versions of the law.[5]

Having this historical background in mind reveals an irony about the current trend of RFRA interpretation. Though the cases in Indiana, New Mexico, and Colorado differ from each other and the Supreme Court’s ruling in Employment Division v. Smith, they all share a narrow vision of when and why a law would be sufficiently burdensome on a religious individual to provide him or her with a special exemption. RFRA – a law passed in order to oppose narrow approaches what sort of religious accommodations one is entitled to – is being interpreted in that same narrow fashion. This limited application not only opposes much of the rationale that fueled RFRA’s initial creation, but, in some ways, enfeebles the very religious securities it was meant to protect.