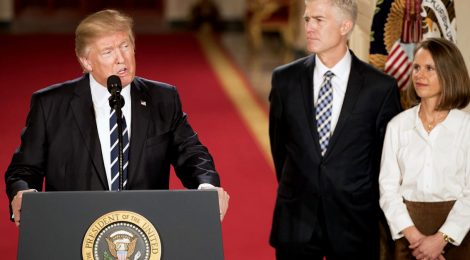 Having just been appointed to the U.S. Supreme Court, Justice Neil Gorsuch presents either an opportunity or another barrier in efforts to reform campaign finance law. While Gorsuch being a Donald Trump appointee does tend to invite an immense amount of skepticism as to how he will in anyway contribute to a progressive minded approach to campaign finance law, perhaps a close reading of his views on money in politics can provide, if only a small amount, some optimism on how he might approach this complex issue. To date, Justice Gorsuch’s only major campaign finance case has been one for which he filed a concurring opinion on in his capacity as an Appellate Court Judge on the Tenth Circuit.

Riddle v. Hickenlooper (2014) was a case that came to the Tenth Circuit out of Colorado.[i] The case centered on a Fourteenth and First Amendment violation claim from a committee trying to elect a minor party candidate running for the Colorado House of Representatives. The plaintiff claimed that the Colorado state law, which made a distinction between major and minor party candidates in the realm of campaign contributions, was a violation of the Equal Protection Clause of the Constitution because it applied a contribution limit differently to candidates based simply on their political affiliation. The plaintiffs also claimed that this was a First Amendment violation because it infringed on their First Amendment right to contribute to a candidate for political office. The defendant in this case, the Governor of the State of Colorado, argued that the statute, which capped contributions for major party candidates at $400 per election-cycle and minor party and write-in candidates at $200 per election cycle was justified because major party candidates had to first win their nominations through a primary election; which provided an extra burden for these candidates. The Tenth Circuit ruled in favor of the plaintiff stating “…the state statute, as applied, violates the contributors’ rights to equal protection.”[ii] The Tenth Circuit made their decision upon a reflection of three central questions,

“1. Are contributors to Ms. Curry similarly situated to persons contributing to her Republican and Democratic opponents? 2. If the contributors are similarly situated, what is the appropriate level of scrutiny? 3. Depending on the appropriate level of scrutiny, is the State’s purpose sufficiently important and is the statutory classification sufficiently connected to that purpose?”[iii].

The Tenth Circuit then answered these questions, concluding that,

“1. Contributors to Ms. Curry’s campaign are similarly situated to contributors supporting her Republican and Democratic opponents. 2. Because the statutory classification affects a fundamental right, the right to political expression, we apply a standard that is at least as rigorous as the standard applied under the First Amendment. 3. Under this standard, the statutory classification would fail”[iv].

While the decision did not substantively address First Amendment protections of money, as it was decided on Fourteenth Amendment grounds, Justice Gorsuch’s concurring opinion provides insight into how he might in the future.

Justice Gorsuch in a concurring opinion chose to discuss at lengths the nuances of applying varying levels of scrutiny. What was significant about Justice Gorsuch’s opinion were the indicators towards his views on money in politics. Perhaps the greatest indication towards his view on money in politics was when he stated, “No one before us disputes that the act of contributing to political campaigns implicates a “basic constitutional freedom,” one lying “at the foundation of a free society” and enjoying a significant relationship to the right to speak and associate — both expressly protected First Amendment activities.”[v] With this line Justice Gorsuch seems to assert his belief in the current dominant First Amendment philosophy of the Supreme Court which has resulted in the Citizens United, and Speechnow.org decisions. But a close inspection of his exact wording also invites a degree of ambiguity.

When Justice Gorsuch uses the words ‘implicates’ and the phrase ‘enjoying a significant relationship to the right to speak and associate’ he does not specify the degree or at least the certainty with which he attributes money as protected speech. Compare his line to one from Justice Kennedy’s majority opinion in Citizens United v. FEC (2010), “All speakers, including individuals and the media, use money amassed from the economic marketplace to fund their speech. The First Amendment protects the resulting speech, even if it was enabled by economic transactions with persons or entities who disagree with the speaker’s ideas.”[vi] Kennedy’s line directly links spending with speech, without any degree of uncertainty. Justice Kennedy states that money is a key element of speech by stating ‘all speakers’ need it, and he attributes speech to money when he states ‘the First Amendment protects the resulting speech’. Justice Gorsuch by comparison invites speculation into his belief in that absolute when he attributes a mere implication. To illustrate this point, Justice Kennedy in the same majority opinion asserted, “As our request for supplemental briefing implied, Citizens United’s claim implicates the validity of Austin, which in turn implicates the facial validity of §441b.”[vii] This line was used to defend the majority’s demand for a re-argument in Citizens United because the appellant Citizens United had not asserted any challenge to Austin or the statute containing §441b. So while Citizens United did not directly challenge the precedent or the law, there was an ‘implication,’ according to the majority, which demanded an actual exploration of its validity. So an implication, while tending to imply a specific relationship or link does not actually reveal the certainty or degree of it.

In conclusion, while this case presents only a small window into the potential judicial philosophy of Justice Neil Gorsuch towards campaign finance law, the implications of his words in Riddle v. Hickenlooper give both hope and despair for the future of regulatory reform. But the hope should not be taken lightly, after all Justice John Paul Stevens, the author of the fiery dissent in Citizens United and one of the most progressive minded justices on the bench at his time, was appointed by a conservative and expected to have conservative leanings but turned out to be one of the most progressive minded Justices of his time. So perhaps, Justice Neil Gorsuch with his careful wording is giving both a nod to the conservatives who would go on to nominate and confirm him and a wink to the liberals who will need a justice open to hearing the merits of efforts to fix campaign finance law. Those trying to fit Justice Gorsuch into a strictly conservative box should tread lightly; he does hold a BA from Columbia University, which has some implications of its own.