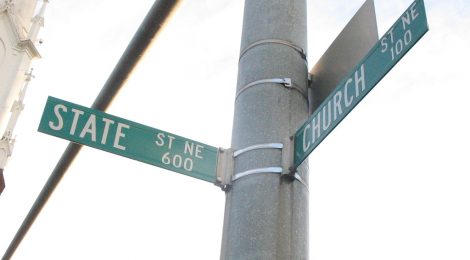 In 2003 within the Southern District of Iowa, Americans United sued the InnerChange Freedom Initiative run by the Prison Fellowship organization, for religious discrimination as well as violation of the Establishment Clause of the First Amendment. [i] Americans United, an organization that supports and advocates for the separation of church and state, argued that the public funding that the InnerChange Freedom Initiative (InnerChange) was receiving from the Iowa Department of Corrections to institute religiously driven programs in public prisons violated both the Iowa and United States Constitutions. Within these programs that InnerChange instituted, prisoners were housed in a separate unit, were given special “honors” privileges, and were immersed in a 24-hour a day Bible and Christ-based curriculum. [ii] Additionally, all employees of InnerChange were required to not only be Christian, but to practice the same beliefs as the organization. In the original court hearing that was decided in June 2006 as well as in the appeals suit in February 2007, both courts ruled that the InnerChange programs violated the Establishment Clause by supporting the religious proselytizing of inmates, engaging in discriminatory hiring practices based on religious beliefs, and discriminating against taxpayers. [iii]

In the decision from the 1971 Lemon v. Kurtzman case, the Supreme Court established the Lemon Test. The Lemon Test held that in order for a case to be deemed a violation of the Establishment Clause, it must pass a three-pronged test. These prongs establish that a statute must have a secular legislative purpose, it must not entangle government with religion, and its primary effects must not include the goal of advocating for or discouraging a religion. [v] It is clearly evident that the InnerChange program violates all three prongs of the Lemon Test, specifically in its attempt to use public money to try to convert inmates as a means of rehabilitation.

InnerChange Freedom Initiative is not the first group to impose religious principles into publicly funded prisons. In fact, religious influences, specifically from the Society of Friends, also known as Quakers, within American prisons began during colonial times and have influences that still exist today. Driven by the Quaker beliefs of the Inner Light, deep solitary reflection, and silence, Quakers were particularly drawn to reforms within the prison system because they believed Quaker tenants would serve as effective rehabilitation techniques. Quaker prison reformers’ proposed changes for the prison system that were based on a belief that environmental factors, such as solitude and silence, would allow prisoners to experience the healing effects of God. [vi]

Drawing upon the conviction that silence encourages repentance, Quakers are responsible for the introduction of solitary confinement into American prisons. [vii] At the Walnut Street Jail in Philadelphia, Pennsylvania, where this technique was first introduced, prisoners were separated based on the classification of their crime. However, solitary confinement as we know it began to take shape in New York’s Newgate Prison. Founded in 1800, this prison was run by Quakers whose rule of law for convicts consisted of character building that forbade swearing, quarreling, disrespect, or idleness. [viii] Bibles were placed in every room, evening religious classes were held, and a space for worship was built. When rules were broken, inmates were placed in solitary confinement cells where they ate only bread and water and had to sleep on the floor since there were no beds or chairs. [ix] However, these policies were not meant to be oppressive, but rather existed as a means for prisoners to reflect on their actions and hopefully be penitent through individual spirituality. [x] Therefore, although the intentions by Quaker prison reformers for solitary confinement to exist as a conduit for prisoner repentance, there is no denying the stark connections that exist between solitary confinement (a practice that still exists today) and religious ideologies imposed on others in public prisons.

Like the Quakers, the InnerChange Freedom Initiative was founded on good intentions. Created as a means to give prisoners a second chance, the Prison Fellowship works to rehabilitate prisoners, and thus ready prisoners for when they leave. Once out of prison, the Prison Fellowship works with former inmates and their families to help prevent future incarceration. However, there is no denying the deep religious ties and motivation that Prison Fellowship and InnerChange draw upon. As recognized in the original 2006 case, the court drew attention in its decision to not only the specific religious language that the program used to advertise itself, but also the language that composed a contract of which they required their employees to sign. [xi] Specific excerpts of this contract that employees were required to sign included a clear affirmative statement of specific religious faith: “We believe in one God, Creator and Lord of the Universe; the co-eternal Trinity: Father, Son, and Holy Spirit. … [Jesus] rose bodily from the dead, and ascended to heaven where, as truly God and truly man, He is the only mediator between God and man … all people are lost sinners and cannot see the Kingdom of Heaven except through the new birth.” [xii] Because of this highly specific language, InnerChange was found by the court to have engaged in religious discrimination within their hiring practices in addition to its violation of the Establishment Clause.

Religious groups that are allowed to advocate for change within the prison system can do so under the protection of the freedom of speech clause within the First Amendment – as long as they are not receiving public funding to do so. In 1956, the United Methodist Church became one of the first major American religious groups to publicly stand in opposition to the use of the death penalty on convicted prisoners. [xiii] Drawing upon their moral concerns over executing someone erroneously and the potential pain it may cause, this inspired the United Methodist Church to become a major religious advocate for its abolition. [xiv] While these efforts have not been realized, as the death penalty still exists in America today, the United Methodist Church highlights an example of a religious group exercising their First Amendment rights in an attempt to change legislation and prison conditions through religious motivation.

Despite instances of success for specific inmates, because of its publicly funded proselytizing, InnerChange did fundamentally violate the inmates’ and taxpayers’ rights. The central issue presented before the court, according to the 2006 decision, “is not whether Iowa inmates can be helped in their rehabilitation by religion, but whether the State of Iowa’s contract with InnerChange shackles the Plaintiff taxpayers and inmates in a way that violates their rights under the United States and Iowa Constitutions.” [xvii] This decision can symbolically serve as legal precedent for all religiously motivated programs and practices past and future, stretching back to the Quakers who attempted to create effective prison reform and rehabilitation programs through the implementation of solitary confinement – a practice that over time has deviated from its original idealistic intentions. However, regardless of any positive intention or potential positive outcome, no religious group should be granted public money to operate in or physically run public prisons due to its blatant violation of the Establishment Clause and the subsequent discriminatory effects that exist for anyone who does not practice that specific religion.