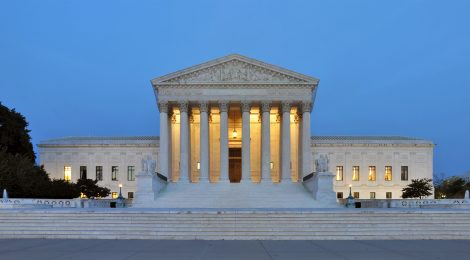 The Politicization of the Supreme Court: The Case against Originalism

Chiara Caraccio / April 23, 2017 / Comments Off on The Politicization of the Supreme Court: The Case against Originalism / Online, Spring 2017

There hasn’t been a time in recent memory where the balance of the Judicial Branch of the United States has been as politicized as it is today. There are multiple compounding factors to this newfound politicization—among them the friction between Supreme Court and the Obama Administration. However, the balance of the court became a truly central issue in the United States with the passing of Justice Scalia. With the controversial non-confirmation of Judge Merrick Garland and Republican control of all three branches of government, the Supreme Court seems bound for a drastic revision in its ideological balance.

With Trump’s Supreme Court Nomination of Judge Neil Gorsuch, the prevailing legal philosophies of constitutional interpretation have become more consequential than ever. Upon close analysis, the interpretation favored by Judge Gorsuch—textualism, also known as clause-bound interpretivism—cannot adequately interpret our constitution, and has troubling implications for the protection of civil liberties and equal protection under the law[1].

Clause-bound Interpretivism is a strict school of originalism that holds that, when practicing constitutional interpretation, a judge should not look farther than the very clause of the Constitution in question. The interpretivist problem, so to speak, is the claim that enforcing the Constitution necessarily means proceeding from premises that are explicit or clearly implicit within the Founding Document itself. This means using only the language that the Constitution provides, contained clause by clause. The only supplement to interpretation restricted to the “framers’ dictionary”, which consists of records of debates and conventions leading up to the ratification of the constitution.

Opponents of Clause-bound Interpretivism have two grounds on which to oppose the practice—first, more conceptually based issues; second, direct examination of the Constitution itself as a method of disapproval.

The most widely-cited and perhaps most intuitive grievance against clause-bound interpretivism is actually a direct response to the claim that clause-bound interpretivism guarantees the “voice of the people,” presumably referring to the founding fathers[2]. The issue with this line of argumentation is that “the people” whose voice is being expressed is not the American public but rather a group of intellectuals that have been dead for two centuries. It’s wildly unclear why the voice of our now temporarily-handicapped founding fathers should take precedent and be prioritized over even modest modern considerations. Furthermore, it is important to reject the widely-accepted notion that the Constitution was written decisively by a unified group of expert patriots with explicit and knowable goals for the nation. In reality, the Constitution was written gradually, by an array of writers stemming from different time periods, places, and ideological worldviews.

Even if we were to buy into the idea of a unified, infallible group of “Super Framers”, clause-bound interpretivism would still not be a sufficient interpretative doctrine. Clause-bound interpretivists assert that any uncertainty in the constitutional text can be cleared up by consulting the Framer’s dictionary. This is problematic for a whole slew of reasons. To begin with, many of the records of the debates surrounding the constitutional amendments — for example, the Fourteenth Amendment — simply no longer exist, having been lost to time and presumably bad bookkeeping.

Yet, even caveating that our records were perfect, not all opinions of the framers are included in the debates—that’s why the amendments are put up to a vote to see what there is sufficient agreement on. This vote is based on the actual text, and not necessarily the arguments that other framers posited about the text that may have been misleadingly recorded. Moreover, Congress and the Framers’ job was only to propose the Constitution—3/4 of the states’ legislatures were needed to ratify it. Problematically, we have no records of what the state legislators thought the document intended to say when they ratified. The only reliable evidence we have of what they intended to ratify is the language of what they passed. As Thomas Cooley said in reference to this very issue, “the Constitution does not the derive its legitimacy from the people who framed it, but those who ratified it…the intent to be arrived at is that of the people.” Cooley explains that looking for meaning in the framer’s dictionaries is counterproductive, as the people who ratified did so not with the aid of the framers’ debates, but by accepting the words in the “sense most obvious to common understanding.” Using the Framers’ dictionary necessarily means favoring their intent over that of those who ratified, a woefully undemocratic practice, clearly unfit to be used in a democratic society[3].

Where then, does this leave the clause-bound interpretivist when faced with a nebulous or otherwise un-obvious phrase? It seems the last recourse left is to hope that not a significant enough number of those exist in our constitution to be a relevant harm. However, not only do these nebulous instances exist, they oftentimes prevail. Specifically, the Fourteenth and Ninth Amendment certainly require more than what clause-bound interpretivism can offer, because of their open-ended language and clear call for interpretation.

One of the cornerstones of legal protection, the Due Process Clause of the Fourteenth Amendment, owes its relevance as a safeguard for citizens’ rights to a reasonable departure from the Constitution. The clause reads “no state shall deprive any person of life, liberty, or property without due process of the law,[4]” requiring, on face, significant interpretation as to what “due process” effectively means. Thanks to years of constitutional interpretation and jurisprudence, starting with the Dred Scott Supreme Court case in 1857, “due process” has taken on substantive meaning. Substantive due process requires that a court protect the ideals of life, liberty, and property of individuals. While procedural due process, the interpretation more favored by originalists – because it assumes the least – simply ensures that the government follows correct legal procedures when processing the removals of these basic rights.

The substantive interpretation provides basic and necessary rights to individuals that is not granted to them elsewhere in the constitution. That alone provides a compelling case for the inadequacy of clause-bound interpretivism, which would never have allowed for this set of rights to be derived from the written text of the Constitution. But even following the Constitution as strictly as possible, and interpreting due process as solely procedural, clause-bound interpretivism simply doesn’t cut it. For example, and as legal scholar Ely points out in his book Democracy and Distrust, it is clear that if the evidence found against a defendant has been forged, it should not be considered in the case. However, this is not a “right” enumerated in the Constitution or the Amendments, and would not fall under the purview of a clause-bound interpretation[5].

Another perhaps even more powerful case study of the inadequacy of clause-bound interpretivism can be found in the equal protection clause of the Fourteenth Amendment. The amendment reads, “no state shall…deny to any person within its jurisdiction the equal protection of laws.” The courts use “rational basis” tests as ways to allow legislation to classify what acts are tolerable and which are not. This method, however, falls short—any overtly racist legislator can successfully reason “rational” basis for segregation if the legislature is similarly racially biased. To find evidence for this discriminative powers we must not look to far and remember that segregation was accepted as “rational” until the Civil Rights Act of 1964 officially ended all states and local laws that condoned, established, or required segregation. Furthermore, any case, regardless of which “class” of person someone is or what they are being deprived of, can be put in equal protection framework by a competent counsel[6]. The answer to what inequalities are tolerable under what circumstances is not found anywhere in the clause, the Constitution, or the writers’ debates. Therefore it must be interpreted outside of the confines of clause-bound interpretivism.

Even more blatantly, it is the Ninth amendment that demands interpretation that clause-bound interpretivism simply cannot provide. It reads, “the enumeration in the constitution, of certain rights, shall not be construed to deny or disparage others retained by the people,” signaling federal constitutional rights beyond those explicitly enumerated—impossible to reach without at least some basic level of interpretation not allowed for by a clause-bound model.

A method of constitutional interpretation that cannot engage with arguably the most important safeguards of civil liberties—the Ninth and Fourteenth amendments—cannot seriously be defended as correct or legitimate, especially considering that originalists pride themselves most on their consistency. The correct method of constitutional interpretation may likely lie somewhere in the middle, a balance of originalism and modern considerations. Regardless, it is clear that both conceptually and in application, clause-bound interpretivism is inadequate.