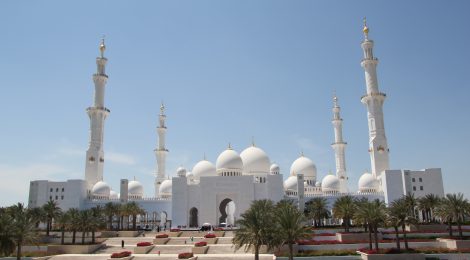 “We should only admit in this country those who share our values.”[1] This statement was issued by President Trump following the first Immigration Ban, barring citizens of seven Muslim-majority nations from entering the country. If we are to accept the rhetoric behind this ban, coexistence among peoples with radically different ethical systems proves difficult if not impossible. In an age of renewed East-West tensions spurred by a recent resurgence in Islamic terror, the Immigration Ban stands as a symbol of division in a world of increasing inter-cultural contact.

The U.S. legal tensions that arise from inter-cultural contact relates to those currently faced in the United Arab Emirates (UAE), where immigrants comprise nearly 90 percent of the UAE’s population.[2] However, the ensuing diversity poses a pressing legal concern for the nation: how should a land once exclusively inhabited by devoutly traditional Muslims react to an influx of outsiders? Whereas the Emirates historically relied upon Sharia (the Quran’s divine law), many expats come from nations with non-religious legal philosophies. In an attempt to accommodate these divergent legal and moral standards, the UAE developed a makeshift mix of Sharia and Civil Law – a Western code-based form of law used extensively in Continental Europe.

Sharia is Arabic for “a path to be followed” – a broad legal term that covers the scope of both personal and religious law. The two sources for Sharia are the Islamic Quran and Sunnah; because both texts are considered to be divine, they are deemed unchangeable when applied to law.[3] Sharia Law is primarily utilized in cases involving social laws. Therefore, the structure of the legal system is complex as Sharia Courts and Civil Courts operate in parallel but under differing jurisdictions.[4]

Sharia Law is problematically applied to cases involving sexuality. As stated in UAE Penal law, “without prejudice to the provision of the Law of Delinquents and Neglected Juveniles, shall be sentenced to death any individual who forcibly compels a female to carnal copulation or a man to sodomy.”[5] A public prosecutor applied this Penal Code in 2006, when 26 men from neighboring countries were charged with homosexuality and sentenced for five years in prison once authorities found them dressing for a wedding at a UAE resort.[6] This specific ruling draws greatly from the Quranic teachings regarding illicit forms of intercourse. Since homosexual actions are considered a crime and direct offense to God, they have divinely-set punishments. The strictness of their punishment is meant to represent the gravity of crossing God.[7] However, in this instance, the use of Sharia law unjustly inhibits personal agency and criminalizes homosexuals, which does not prove to be effective, accepting, or just.

In addition to cases involving sexuality, the legal tensions between Civil and Sharia Law is also demonstrated in cases involving dress code. In the UAE, contrasts in clothing are conspicuous, tangible signs of inter-cultural contact. Whereas local norms dictate the wearing of the dishdash (white garb) and keffiyeh (white scarf) for men and the abaya (black cloack) and hijab (black veil) for women, foreigners may desire to wear ripped jean-shorts and tank tops. In this scenario, such hidden schisms are no longer possible, and a unified legal code must prevail.

In July of 2013, a significant legal precedent established decency for attire regulations. Two British citizens, Charlotte Adams and Ayman Najafi, had been jailed for a month after being prosecuted for kissing in public.[8] In the ensuing litigation, the court ruled that public displays of affection were banned under Dubai’s Executive Code of Conduct (other Emirates share similar codes). It also provided tangible and specific guidelines for clothing, stating that “In public places […] shorts and skirts shall be of appropriate length […] clothing shall not indecently expose parts of the body, be transparent, or display obscene or offensive pictures and slogans. […] Swimwear shall not be worn outside the beach, as decent dress is the rule in the rest of the city.”[9] Following years of ad hoc regulations varying wildly across venues, it seems that the Emirates finally have somewhat of a common standard for public decency. One one hand, this ruling presents a compromise between conservative local values and more liberal foreign tendencies, not going as far as applying strict Sharia law for women are not required to wear veils in public like in Saudi Arabia. On the other hand, it not only problematically perpetuates a criminalization of homosexuality but also violates the freedom of self-expression for foreigners and citizens alike.

While far from conclusive, the Emirati attempt to merge local and foreign value systems strives to blend diverging morals. The UAE’s experiences and legal attempts to promote acceptance of their state’s diversity offer great insight to the question of accommodation. By holding locals and foreigners accountable to the same restrictive moral standards, the UAE national dress code attempts to create a sense of common duty and community that is lacking both in everyday life and legal policy; as in neighboring Qatar, a recent government drive to promote similar dress standards proudly declared that each foreigner was “One of Us.”[10] But the reality is that the blending of Sharia and Civil Law fails to promote free will and true acceptance of foreigners. In our country, we find ourselves in a mirrored position, as laws issued by our current presidential administration violate the personal freedoms of immigrants and foreigners. However, if we can learn from missteps in Emirati law and nullify legal frameworks that alienate or polarize, we can promote level footing and unity in America today.

[8] Colin Simpson, The rules are clear, says lawyer: no kissing allowed in Dubai, The National, online at http://www.thenational.ae/news/uae-news/heritage/the-rules-are-clear-says-lawyer-no-kissing-allowed-in-dubai

[9] Colin Simpson, The rules are clear, says lawyer: no kissing allowed in Dubai, The National, http://www.thenational.ae/news/uae-news/heritage/the-rules-are-clear-says-lawyer-no-kissing-allowed-in-dubai

[10] Qatar Scoop Staff, If you are in Qatar, You Are One of Us Please Dress Moderately, Qatar Scoop, online at http://www.qatarscoop.com/about-qatar/if-you-are-in-qatar-you-are-one-of-us-please-dress-modestly/ (March 2, 2017)

← International Cybersecurity: A Call for Legislation
The Politicization of the Supreme Court: The Case against Originalism →