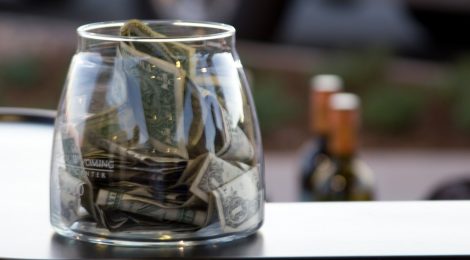 Employee Tip-Pooling: The Dynamic Between Federal Regulation and Courts

In the case of Oregon Restaurant & Lodging Association v. Perez, the Ninth Circuit Court of Appeals deemed that employers could not force employees into a tip-pooling system with employees who do not regularly earn tipped wages.[1] Tip-pooling is a system where all employees have to give up a portion of their tip wages, with the total being distributed evenly amongst the workers involved in the pool. The practice is traditionally done to promote equity amongst workers.[2] The issue arises, however, when workers who do not make any money from tips, such as “back-of-the-house” workers including chefs and kitchen help, are able to draw money from the pool. In the eyes of tipped workers, it is a system in which they unfairly subsidize their employers by giving away portions of their wages to back-of-the-house workers.[3]

The legality of this issue was first brought before the Ninth Circuit Court of Appeals in 2010 in the case of Cumbie v. Woody Woo, Inc. The plaintiff, Misty Cumbie, was a waitress who wished to contest the legality of restaurants enforcing tip-pools amongst its entire staff. Restaurant employers engaging in such practices justified themselves by claiming that even though back-of-the-house workers did not directly interact with customers, their services still contributed to the customer’s overall experience. When the issue was presented to the Ninth Circuit, the court cited the Fair Labor Standards Act (FLSA) of 1938 in their decision. The court stated that as per section 203(m) of the FLSA, which states that employers are justified in paying employees the legal minimum wage less the amount the worker made in tips (referred to as a “tip credit”), all inclusive tip pools were legal. In the eyes of the court, the lack of specific mention regarding employers enforcing such tip pools while not utilizing tip credits led to a legal ambiguity which could not justify declaring the restaurant’s behaviors as illegal.[4]

In response to this reading by the Ninth Circuit, the United States Department of Labor reexamined the FLSA and enforced new regulations, specifying that “a valid tip pool may not include employees who do not customarily and regularly received tips, such as dishwashers, cooks, chefs, and janitors.”[5] This regulation stood at odds with the Cumbie ruling, presenting a potential issue for any new cases presented before a court regarding tip pooling’s legality: should the precedent be followed, or should the new regulation be respected?

Despite the wishes of the Department of Labor, federal courts looked towards the Cumbie case for guidance. In 2013, the Oregon Restaurant and Logging Association presented a challenge of the new Labor Deparment regulation before the United States District Court for the District of Oregon. In their ruling, the court, citing the local precedent in the Ninth Circuit Court of Appeals, stated the DOL’s regulation was invalid, thus reasserting the legality of tip-pooling.[6]

Therefore, on February 23, 2016, when the Ninth Circuit Court of Appeals itself stated that the same ambiguity in section 203(m) which allowed for unregulated tip pooling in the first place allowed the Department of Labor to implement its new regulation, many legal scholars and industry leaders were surprised. Not only was this an instance where a court of significance reversed its own ruling, but it had also had made a ruling with serious economic impacts for the entire country. In its decision, the Ninth Circuit had effectively established a new national precedent: it would be illegal for tip pools to include back-of-the-house workers across the country.[7]

The decision made by the Ninth Circuit is important to note on multiple levels. First of all, it marks an incident where the intentions of Washington policy maker, individuals meant to represent the will of the people, were not carried out by their own actions, but rather by an ambiguity in the law. Considering that the result of this ruling affects the lives of tipped workers across the nation, it being determined primarily by an ambiguity and not by deliberation is indeed a worrying prospect. Another noteworthy aspect about this case is that the reversal of the Ninth Circuit’s decision correlates with the policy trend occurring at the municipal and state level across the country. In a country where an increasing amount of states and cities have adopted the $15 minimum wage as well as other “progressive” economic legislation, a ruling that fits into this progressive push is an interesting coincidence.

Ultimately, the case of Oregon Restaurant & Lodging Association v. Perez exemplifies the intricacies and complexities of the American legal system. The series of rulings on tip pooling in the Ninth Circuit point to an interesting relationship between the Court and federal agencies: the Court of Appeals acted as a corrective force, modifying its own precedent on ambiguous statute to uphold a more clearly defined federal regulations.