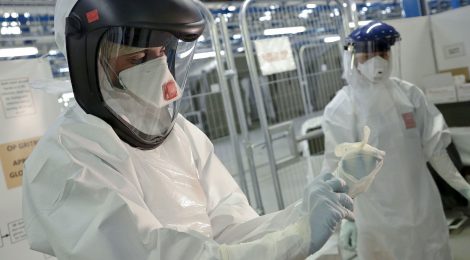 Under the Commerce Clause of the United States Constitution, the federal government has the authority to detain individuals exposed to communicable diseases from entering the country or travelling between states. [1] However, the federal authority to quarantine asymptomatic individuals from abroad or engaging in interstate movement contradicts with the authority granted to states—under the police powers bestowed by the tenth amendment—to detain individuals within their respective borders.

The threat of infectious diseases such as Zika and Ebola highlights the use of such legally mandated detentions, whereby courts have allowed individuals who show no symptoms and test negative for diseases to be detained for the ostensible protection of the public’s health at large; such legal detentions carry questions of civil liberties, state power, and federal authority.

Article 1, Section 8 of the Constitution allows for federal regulation of interstate commerce, foreign relations, and the promotion of public welfare. It is from this provision that the federal government derives its authority to detain individuals entering the country or travelling between states. The tenth Amendment, conversely, grants to states the police power to enforce quarantine within their borders. In practice, however, state governments have traditionally been responsible for designating and enforcing quarantines, as federal quarantine orders are rare. In the past 60 years, only two federal quarantine orders have been issued: one in 1963 to detain a potential carrier of smallpox from Sweden, and the other to isolate Andrew Speaker, a lawyer with drug-resistant Tuberculosis, in 2007.[2]

Despite the infrequency of federal quarantine, the federal government possesses a robust legal and logistical framework for initiating them if necessary. The Public Health Service Act of 1944 established the federal government’s ability to quarantine individuals in interstate or foreign travel. Such authority is delegated to the Director of the Centers for Disease Control and Prevention (CDC) under 42 Code of Federal Regulations parts 70 and 71. The diseases for which the CDC is authorized to detail individuals are determined in presidential executive orders. Furthermore, the CDC engages in such detentions through its Division of Global Migration and Quarantine at any of its twenty quarantine facilities, most of which are located at U.S. airports, with the assistance of officers from U.S. Customs and Border Protection and the U.S. Coast Guard.[3]

Viral hemorrhagic fevers, a class of diseases of which Ebola is a part, are one of the many infections for which the CDC is authorized by executive order to take action under Executive Order 13295.[4] During the 2014 Ebola outbreak, however, the CDC did not issue any federal quarantine orders and recommended that only healthcare workers, or those in direct contact with the virus, self-monitor themselves for 21 days post-exposure and report fevers or other symptoms to health authorities.[5] Thus, it was primarily up to the states during the 2014 West Africa Ebola Outbreak to respond to the virus’s U.S. presence.

The authority to engage in that response by means of quarantine was first outlined in the landmark 1824 Supreme Court case Gibbons v. Ogden, wherein the Supreme Court considered “quarantine laws” to be a part of the “immense mass of legislation which embraces everything within the territory of a State not surrendered to the General Government; all which can be most advantageously exercised by the States themselves.” The court’s opinion held that “no direct general power over these subjects [e.g. quarantine] is granted to Congress and consequently they remain subject to state legislation.”[6] In the 1878 case Fertilizing Company v. Hyde Park, the court further reiterated the state’s police power, writing that such authority “belonged to the States when the Federal Constitution was adopted. They did not surrender it, and they have it all now.”[7]

Throughout United States history, however, state and local authorities have used such quarantine powers in questionable ways, at times using their police powers as a means of discriminating against groups of people on the basis of their race or ethnicity.[8] In response to four cases of Typhoid fever identified in a tenement house in New York City, for example, the city ordered in 1892 the quarantine of “every single Russian Jewish passenger of the Massila,” the ship on which the four cases had arrived.[9] Approximately 1,200 people were detained, and of those, 1,100 had never been on the ship, but had simply lived in proximity to actual passengers and matched the city’s target demographic. Later, members of Congress used the 1892 quarantine to justify the exclusion of Eastern European Jews from immigrating to the U.S.[10] In a similar vein, San Francisco required all Chinese residents in 1900 to receive a vaccination against the bubonic plague and limited their movement until they could prove they had received it, despite the fact that the city had hundreds of thousands of non-Chinese residents who could just as easily have contracted the virus.[11]

Such equal protection considerations highlight why organizations such as the ACLU expressed concern at the quarantine laws promulgated following the events on September 11th, 2001. In the wake of the terrorist attacks, forty-four states enacted some form of clarification of quarantine powers based on the Model State Emergency Health Powers Act (MSEHPA), a legal framework developed by Johns Hopkins and Georgetown University’s Centers for Law and the Public’s Health.[12] The ACLU argued at the time that the model law did not “adequately [protect] citizens against the misuse of the tremendous powers that it would grant [state governments] in an emergency.”[13] For example, under the model law, Governors are not required to consult with public health experts or authorities prior to declaring a public health emergency, which gives them the power to quarantine and, among other things, “close, direct and compel the evacuation of […] any facility of which there is probable cause to believe that it may endanger the public health” (MSEHPA, Article V, Section 501).[14]

While it requires that the use of quarantine be “the least restrictive means necessary to prevent the spread” (MSEHPA, Article VI, Section 604) of contagious disease, the 2014 case of of Kaci Hickox, a nurse who worked for Doctors Without Borders in Sierra Leone, highlighted the ACLU’s original concerns regarding the suspension of civil liberties under quarantine. Upon arrival to Newark airport, an asymptomatic Hickox was detained and New Jersey governor Chris Christie later sent to her home state of Maine following a negative test for Ebola after eighty hours in state custody. There, Maine Governor Paul LePage, despite Hickox’s negative Ebola test and lack of symptoms, ordered that she be confined at home for twenty-one days, the maximum incubation period for Ebola. Hickox flaunted the governor’s order, defying her quarantine and going on a bike ride with her boyfriend while being followed by police cruisers.[15]

Courts eventually found that, because Hickox had no symptoms and tested negative for the disease, her detention was unlawful under Maine law (Maine Revised Statutes, Title 22, Subtitle 2 §801-811), which required “probable cause to believe that an individual has a communicable disease.” The court granted her freedom of movement, ordering her to less invasive “direct active monitoring” of symptoms under a healthcare professional. Forced to unnecessarily spend over three days in an isolation tent without access to clothing or a shower, the court wrote in it decision that it was “fully aware that people are acting out of fear and that this fear is not entirely rational.”[16]

Hickox’s mistreatment stems from the inherently political, not scientific, nature of elected state executives. The basis on which forty-four states base their quarantine legislation grants Governors the responsibility of declaring “public health emergencies,” which authorize detention orders, without required consultation with or oversight from health experts. Governors, however, do not possess the absolute power to initiate quarantines and are restrained in some cases, such as Hickox’s, by the laws of their legislatures. Nevertheless, while LePage’s aforesaid quarantine order violated the law, Governor Christie’s actions were technically legal. If he had abided by the CDC’s recommendations, however, Hickox would never have undergone the illogical and embarrassing treatment to which she was subjected under his governorship. Given the unlikely nature of a constitutional amendment giving greater authority to a centralized federal authority, states’ citizens should protect their right to due process through upholding legal, political, and scientific accountability.