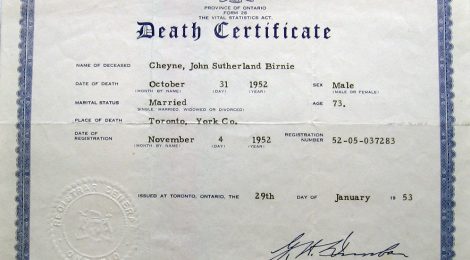 When Do We (Legally) Die? The Jahi McMath Case

A federal lawsuit filed in December 2015 on behalf of a California teen now being cared for by her mother in the state of New Jersey seeks to overturn the death certificate issued in her name on December 12, 2013 by the state of California. The civil rights complaint alleges the teen’s right to exercise her religious belief was denied as set forth in the Fourteenth Amendment, whereby “nor shall any state deprive any person of life, liberty, or property, without due process of law.” [1]The suit also cites violation of human rights under the American with Disabilities Act, the federal Rehabilitation Act and challenges the legal definition of brain death.[2] The legal battles surrounding the McMath and similar cases highlights the importance of federal statues defining and determining brain death, coma and persistent vegetative state, standard of care for each and uniform legal remedy. While the U.S. Supreme Court has affirmed the right of patients to refuse medical treatment there is a lack of national consensus on determination and declaration of brain death, acceptable standard of medical care and civil liability.

The teen at the center of the suit is 15-year-old Jahi McMath who was admitted to Children’s Hospital of Oakland California for a tonsillectomy. Following the surgery, she suffered massive bleeding, cardiac arrest, placed on life support and declared legally brain dead. Jahi’s parents initial attempts to continue life support was rejected by the county court. They appealed to the California Court of appeals citing religious beliefs and the U.S. District Court for the Northern District in the state of California and were denied. A federal magistrate intervened and granted her family the right to keep her on life support via artificial ventilation.

Jahi, who remains on life support, was moved to New Jersey whereby the New Jersey Declaration of Death Act provides for a “religious or conscience exception”.[3] Unique to New Jersey, this exemption provides for a determination of death on cardio-respiratory grounds when religious rights would be violated upon declaration of death on neurological criteria. New York is the only other state to have a similar act.

Due to the issuance of the legal death certificate in the state of California, Jahi cannot return to her home state of California. Previously requests made on her behalf to void the death certificate by the California Department of Public Health have been denied. Notably, California caps medical malpractice at $250,000 for children. However if Jahi is declared to be legally alive there is no cap for damages. Two medical malpractice suits have been filed on Jahi’s behalf seeking unspecified claims.

Brain death is a medico-legal term involving both medical jurisprudence, a branch of medicine, and medical law. The diagnosis of brain death is necessitated by the development of the mechanical ventilator.[5] Often confused with a coma (state of unconsciousness) or a persistent vegetative state (destroyed state of consciousness)[6], both of which have all or limited neurological function, brain death lacks all neurological function or consciousness. Brain death is irreversible with no chance or recovery.[7] Research is limited on how long a brain dead person can be kept functionally but in theory it is indefinite.[8]

Prior to the 1960’s, all patient care decisions followed the Hippocratic Oath granting doctors “full command” of patient care.[9] During the mid-1960’s this agency shifted to the patient by way of informed consent – the doctor recommends, then the patient agrees or disagrees. But what happens when a person lacks the mental capacity to consent?[10]

Litigation involving those diagnosed as brain dead, in a coma or persistent vegetative state and artificial life support creates a bio-ethical, moral and religious debate, often with varying outcomes. Remanding the right to die jurisprudence to individual states, not bound by the constitution resulted in varying legislative outcomes by state opened the door to further litigation and continues the religious, bio-ethical and legal debate.[11]

Nancy Cruzan, the first right to die case to make it to the Supreme Court in 1990[12], resulted in a ruling allowing patients or guardians to make (end of life) decisions provided there is “clear and convincing” proof of patient wishes [13]but set no national guidelines thereby placing the burden on individual states. Cruzan, in a persistent vegetative state since 1983 survived with no ventilator. Her parents sought to have her feeding tube removed and was challenged by right to life activists, doctors and the state of Missouri until the removal of her feeding tube as granted by the Supreme Court’s decision and demonstrating this to be her wishes.[14]

The landmark right to die case of 21 year old Karen Ann Quinlan, who lapsed into a coma followed by a persistent vegetative state in 1975, whose parents sought to remove her ventilator against doctor’s wishes was ultimately settled by the Supreme Court.[15] Citing judicious neglect and interpreting individual privacy, the Court noted ”ultimately, there comes a point at which the individual’s rights overcome the state’s interests”[16]. Upon removal of ventilator, she began to breathe on her own and survived 9 more years in a persistent vegetative state with a feeding tube for nutrition. Her case is cited as the cornerstone for the establishment of bioethical review boards in medical facilities, medical and religious civil rights and ethical theology around the world.

The 1990-2005 legal and ethical battle surrounding Terri Schiavo, a woman in a permanent vegetative state, involved five federal suits, four denials of certiorari from the U.S. Supreme Court and then President George W. Bush was ultimately settled through the federal court system whereby her husband won the right to disconnect her feeding tube and allow her to die against her parents’ wishes. A cognitively disabled Terri Schiavo was denied food and starved to death. In the 2013 medical ethics case of Marlise Munoz, a pregnant Texas woman declared brain dead after suffering an embolism; her husband sought legal remedy from the courts to remove her from life support. Doctors cited a Texas law which restricts the application of advanced directives in pregnant patients. The Texas judge, who did not rule on the constitutionality of the law, citing her status as brain dead, sided with Munoz’s husband on the basis of a Texas statute that recognizes brain death as legal death and therefore ruled the law did not apply to Munoz. A brain dead Munoz was removed from life support and cardiac functions ceased.

While the McMath family seeks relief through the California courts, she remains in New Jersey on a ventilator and feeding tube. Both the medical malpractice and the civil suits seeking to overturn her death certificate focus on definitions of brain death, coma and persistent vegetative state. Similar to the Munoz case, the McMath family is defying medical directive in the interest of patient wishes. While both Munoz and McMath were diagnosed as brain dead, the presence of a beating heart collides with ethics, law and medicine.[17] In the cases of Quinlan, Schiavo and Cruzan, all in persistent vegetative states, the courts recognize the use of a surrogate to determine patient interests.[18]

Twenty five years after the Cruzan case constant deliberation surrounding the definition of brain death continues.[19] Absent of consistent federal statutes regarding definition, diagnosis and treatment, the medical and legal professions constantly examine what constitutes the definition of life, death and Judicious neglect as bio-ethicists collide with religious and sociological beliefs. The lack of uniform federal statutes governing the declaration of death has necessitated challenges to state law. Malpractice liability limits set at the state level creates further room for litigation. The Munoz, Schiavo, Quinlan and McMath cases highlight the need for consistent protocol in a pluralistic society where multiple definitions should be allowed to coexist.[20] Rabbi Elliott Dorf was quoted in the New York Times as saying that “At some point or another, we have to recognize that death has come and begin to deal with that appropriately, not medically, but through the mourning process.” But who decides when that time is?

[20] Zeiler K. Deadly pluralism? Why death-concept, death-definition, death-criterion and death-test pluralism should be allowed, even though it creates some problems. Bioethics. 2009;23(8):450-459.