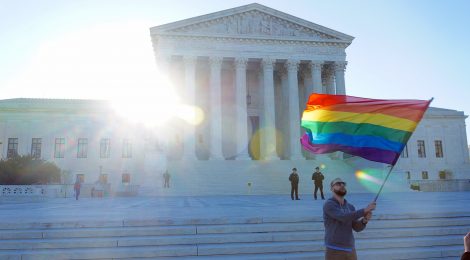 The road to the decriminalization of same sex behavior and marriage rights for same sex couples has been a long one. And yet, despite big victories at the federal level for many same-sex couples, many of these advances have been challenged at the state level. Most recently, North Carolina approved a law overturning the city of Charlotte’s ordinance that was intended protect transgender individuals. In doing so, they established a state-wide policy prohibiting any protections against LGBT individuals.[i]

This law is unconstitutional because it flies in the face of Supreme Court precedent for the past twenty years. Since the Romer v. Evans decision in 1996, the Supreme Court has held that attempts to eliminate a protected status for LGBT individuals is unconstitutional.[ii] Romer v. Evans was the beginning of a shift in the Supreme Court’s attitude towards LGBT rights. Before the Romer decision, the court had decided 10 years earlier in Bowers v. Hardwick that sodomy was not a constitutionally protected right.[iii] In the Romer decision, the state of Colorado passed an amendment to the state constitution prohibiting any government body from recognizing homosexuals as a protected class. By barring gay people from being able to seek legal redress against discrimination, the Court concluded that this would violate the 14th Amendment which guarantees “equal protection of the laws.”[iv] The Romer decision represents an acknowledgement that discrimination against homosexuals happens and as such they are entitled to the ability to seek legal redress in the face of such discrimination.

When applying the Equal Protection Clause, the Supreme Court applies different level of scrutiny towards laws dealing with specific minorities in order to balance state interests and social protections.[v] If a law deals with race or religion, for example, the Court applies a strict scrutiny lens towards the law.[vi] This means that the government has a high threshold to prove that the state interest is especially important to justify that kind of discrimination. Currently, there is a lack of legal consensus on whether or not LGBT individuals should be treated as a suspect class. [vii] Nonetheless, although LGBT individuals are not officially a suspect class that has not stopped the Supreme Court from applying the Equal Protection clause to strike down discriminatory laws against them.

The Romer case and the most recent law passed in North Carolina are exceedingly similar. Just like the Colorado amendment was intended to prevent any legal protections for homosexuals, so too did the North Carolina law strike down a Charlotte city ordinance protecting the ability of transgender individuals to use the bathroom that they prefer. The refusal to acknowledge discrimination against LGBT individuals goes against nearly twenty years of a legal understanding that LGBT people do have a right to seek legal options in the face of discrimination.

As such, it is incredibly unlikely that the North Carolina law holds up in court. Even before gay marriage was legalized in 2015 in Obergefell v. Hodges, the law would have likely been struck under the standard set by the Romer decision especially given the similarity of the two cases. The North Carolina law is blatantly unconstitutional — why North Carolina’s governor and legislature insist wasting time and tax dollars passing discriminatory laws and instead of focusing on the state’s more pressing issues is anyone’s guess.

← When Do We (Legally) Die? The Jahi McMath Case
Teaching in Prisons: A Q&A with Anne Freeland →