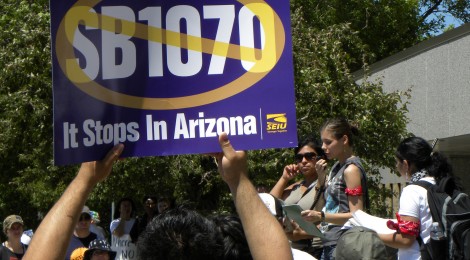 When Xenophobia Meets the Law: SB1070 to Today

In response to the tragic bombings in Paris, Arizona’s governor Doug Ducey announced on November 16, 2015 that he would ask the federal government to halt the flow of refugees into Arizona and demand more state authority on the “administration and placement of refugees” based on the danger of “radical Islamic terrorists.”[1] Although Ducey has no real authority to prevent refugees from entering Arizona, this rhetoric and ideology mirrors those that have been used in Arizona to justify SB1070, another piece of legislature supporting racial profiling in the name of securing borders.

Understandably, there has been substantial negative backlash to Ducey’s statement. Legal scholars and pundits have reminded the public and Ducey that as per Article 1, Section 8 of the Constitution, only the federal government has the authority to control the flow of migrants and refugees.[2] Furthermore, the United Nations Refugee Agency has stated that denying asylum for refugees is simply a xenophobic response as refugees are often running away from the same extremism and terrorism that Ducey denounces.[3]

Arizona, however, is familiar with using the excuse of homeland security to justify its xenophobic policies. In 2010, Arizona passed SB1070, or the ‘Support Our Law Enforcement and Safe Neighborhoods Act,’ with the intent of reducing crime by giving police officers more power to investigate suspicious individuals. However, this premise also assumed that crime was intrinsically tied to undocumented citizens. By nature of this assumption, SB1070 included sections that supported this xenophobic viewpoint. For example, Section 6 of SB1070 prevents undocumented citizens from being hired and also authorizes warrantless arrests of people with probable cause of entering the United States illegally.[4] Fortunately, this section was ruled unconstitutional in Arizona v. United States on the basis that it precluded federal authority and thus violated the Supremacy Clause of Article 6.[5] In Section 2 of SB1070, suspected people were required to release information about their immigration status as long as the officer had “reasonable suspicion.”[6] However, Phoenix Sheriff Joe Arpaio’s interpretation of “reasonable suspicion” came down to whether or not a person was Hispanic, according to a decision by U.S. District Judge G. Murray Snow.[7] As a result, more often than not, Hispanic drivers were stopped and questioned on mere basis of race.

Along with Arizona, the federal government has to some extent invoked xenophobic sentiments as a means of preserving national security. In 2012, SB1070’s provisions that justified racial profiling were upheld in the Supreme Court case Arizona v. United States because the section did not necessarily interfere with federal law even though the provision disregarded the equal protection clause of the 14th Amendment. Moreover, the House of Representatives recently passed HR4038, or the American SAFE Act, which would increase the requirements for the screening process of refugees despite criticism that American screening techniques are thorough enough, especially compared to European ones.

When tragedies such as the bombings in Paris occur, they bring attention and concern to domestic security often at the expense of marginalized populations. Unfortunately, this ideology is not unique to Arizona. Many other states across the nation, such as Maryland and Texas, have also declared rejections of refugees. And although national security should remain a priority, it is important to not let misguided notions of race and xenophobia influence policy-making.