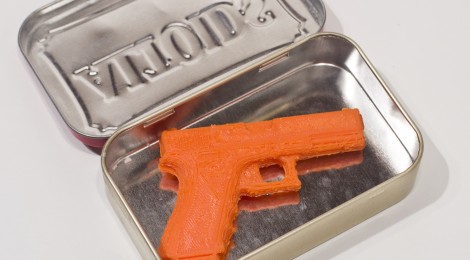 The Freedom to Print Your Own Gun

As technology improves and prices fall, 3D printers will gradually become ubiquitous household fixtures.[1] Given the rapidity at which 3D printers have gained popularity, how has the legal system adapted to this technology?

3D printing allows cheap and convenient production as soon as a need arises. Yet, the possibility of producing practically anything at whim can be dangerous. In the wrong hands, 3D printers may prove lethal, for example the production of firearms through 3D printing. Defense Distributed founder Cody Wilson produced the first 3D printed gun in 2013. He called it “the Liberator” and released the blueprints for the gun online.[2] Should it be permissible to 3D print weapons?

In the last session of Congress, this very question was an important topic of debate. However, Congress passed just one piece of legislation on gun control in the entire session: an extension of the Undetectable Firearms Act of 1988. This act, which was signed into law by Ronald Reagan, essentially illegalized the manufacture, trade, or possession of firearms that could not be distinguished by a metal detector. The need to extend this act developed heated arguments regarding whether or not to regulate 3D printed guns.[3]

Congressman Steve Israel championed the need to legislate against these guns. He argued  “background checks and gun regulations will do little good if criminals can print high-capacity magazines at home. 3-D printing is a new technology that shows great promise, but also requires new guidelines.” Additionally, Rep. Israel mentioned the need for law enforcement to prevent “homemade high-capacity magazines from proliferating with a Google search.”[4] While Israel’s intentions are commendable, is it feasible to control the files shared online that contain the blueprints used by 3D printers?

The blueprint files of 3D printing are computer code. The Sixth Circuit, in the case Junger v. Daley, established that source code is a form of “expression” and therefore protected under the First Amendment “because of its expressiveness in conveying ideas of computer programming.”[5] In 1997, the judge presiding the case Bernstein v. US Department of State found it unconstitutional for the government to prevent anyone from publishing his or her cryptography software.[6] Constitutionality of code has been structured around whether a form of code is “expressive” or if it is purely “functional.” Expressive code is code written in languages that are easy to understand such as Java, while functional code is used to carry out specific tasks and does not concern itself with human readability. However, this is a slippery slope: code can be arguably both functional and expressive, as argued by the plaintiffs in both Junger v. Daley and Bernstein v. US Department of State. These legal precedents pave the way for free-flowing computer code. Under current statutes, code could turn out to be digital files containing blueprints for the manufacture of guns.

Currently, the government lacks the means to rid the Internet of digital blueprints for 3D printed guns without rethinking the United States’ government position on Internet censorship. Rather, censoring digital blueprint distribution would have to target guns specifically in order to avoid limiting the beneficial aspects of 3D blueprint instruction such as prosthetics.

To pre-emptively fight 3D-printed guns, Congressman Israel proposed the Undetectable Firearms Modernization Act. This act requires metal parts to be permanent components of any gun. Under the 1988 Undetectable Firearms Act, a person can easily detach and reattach a piece of metal and have a plastic firearm pass through security checks. The Modernization Act would have made the metal components be critical and permanent components of all guns, closing the loophole in the original act. Unfortunately, the act proposed by Representative Israel has been withering away in the Subcommittee on Crime, Terrorism, Homeland Security, and Investigations since the last Congressional session.[7] This act would have respected the Second Amendment’s right to bear arms but also prevented “concealed carry,” balancing the need for regulation with the individual rights outlined in the Constitution.

Many proponents of free reign 3D printing argue in favor of personal liberty and staunchly defend the belief that the Second Amendment’s right to bear arms also protects the production of plastic guns. However, the lack of enforcement for 3D printed guns raises a critical issue that will loom over 3D printing moving forward. How do we regulate the potential to mass create weapons while still respecting technological advances? Do we legislate the code files for 3D printing, but ultimately end up entering the same failed enterprise of trying to prevent pirating of music and movies? Freedom comes with its own costs. 3D print exemplifies the tradeoff dilemma between social good and personal liberties we are forced to consider when creating laws.

← Personal Liberties and Public Safety: the Legality of Mandated Vaccines
Role of Race in Partisan Gerrymandering →