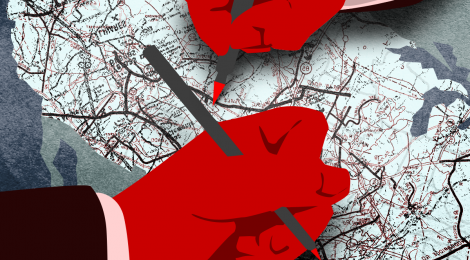 Role of Race in Partisan Gerrymandering

Dr. Martin Luther King best defines the goal of racial equality in his illustrious I Have a Dream speech. During these moments, he states his dream of a world where individuals judge each other based not on the “color of their skin, but on “content of their character.” [1] King’s straightforward mantra perfectly describes the struggles of integrating schools and the Civil Rights Movement’s goals of the 1960s, where the only factor of racial decisions was the color of skin.  The American populace did not judge or subjugate African-Americans because of their political or ethical tendencies, but because they were African American.  Many state legislatures possessed a similar outlook during redistricting, and until the passage of the Voting Rights Act in 1965, they redistricted their state’s constituents in a manner where African Americans would receive the least influence, a process known as racial gerrymandering[2].  While the Voting Rights Act prohibited blatant racial gerrymandering, since the act’s passage, the defining factors of what constitutes racial gerrymandering have become grayer.  The murkiness was recently seen when the Alabama State Legislature redrew the electoral districts of their state after the census of 2010.

Rather they simply drawing a grid, Republicans in the Alabama State Legislature sought to retain their supermajority through gerrymandering, a term that gets its name from an 1812 Boston Herald piece that attacked then governor Elbridge Gerry for strangely reapportioning districts in Massachusetts, one of which the author claimed was shaped like a salamander[3]. Gerrymandering is now used to describe the manipulation of electoral boundaries to benefit or hinder a specific group or class.   Legislatures have used and abused this tool since the nation’s inception.  The two ways legislatures have utilized gerrymandering are by either packing a given group into fewer districts, thus limiting their influence in other districts, or by cracking a given group up into many districts, inhibiting them from electing a representative from their group.[4] The most common form of gerrymandering is when the ruling party of a legislature redraws electoral boundaries to assist their party’s interest, a practice known as partisan gerrymandering.  Unlike racial gerrymandering, the constitutionality of the partisan form of division is dubious, confusing, and hotly debated, but for now, states like Alabama are constitutionally permitted to practice partisan gerrymandering.  However, in the recent 5-4 decision of Alabama Legislative Black Caucus v. Alabama, the Supreme Court stated that partisan politics was not the only factor thee Alabama State Legislature utilized in gerrymandering, and declared that the legislature took race into consideration in a method they deemed unconstitutional.  In addition, the Supreme Court is sending the case back to the district court to reconsider certain districts and the role that race played in those districts’ formation[5].

Before the Supreme Court decided on the legality of Alabama’s redistricting efforts, a Federal District Court heard the case and found nothing wrong.  In the majority opinion signed by Justices Kennedy, Ginsburg, Kagan, and Sotomayor, Justice Stephen Breyer, the author of the majority opinion, writes that the steps that the District Court took to reach the opinions were legally erroneous.  Much of his opinion is spent on matters irrelevant to future voting and election cases, such as the standing of the appellants to challenge the law and whether significant arguments of the involved parties were preserved when the case was appealed[6].   Nevertheless, a significant portion of the opinion involved the definition of a racial gerrymander and the modern connotations of the Voting Rights Act.  Breyer, counter to the sentiment of the district court, believes that one must look at individual districts, not the state as a whole, to determine the legitimacy of a gerrymandering claim.  Therefore, he decided to send the case back to the district court, so that they could take another look atAlabama’s legislative efforts with this new standard.  He also stated that the Alabama legislature relied too heavily on race in redrawing the districts, and in specific, pointed to the minority-majority 26th Senatorial District, where in order to make up for population shifts, the legislature added 15,785 new people to the district, and only 36 of them were white. Justice Breyer called this “a remarkable feat given the local demographics.4”

The justices with the minority opinion expressed two dissents.  The principal dissent, written by Justice Antonin Scalia, primarily focuses on the matters of standing and the preservation of certain issues, but he did not shy away from inflammatory rhetoric in his disapproval of the majority opinion, and called the decision “a sweeping holding that will have profound implications for the constitutional ideal of one person, one vote, for the future of the Voting Rights Act of 1965.” Justice Clarence Thomas, the only African-American on the bench and a strong believer in a race-blind constitution, wrote an additional dissent where he lashes out on the court’s approach to voting rights.  He points out that states were “first required to create ‘safe’ majority-black districts, then told not to ‘diminish’ the ability to elect, and now told they have been too rigid in preventing any ‘diminishing’ of the ability to elect.”   He believed that this case was just an argument over “the best racial quota.”

While one can argue over the merits and constitutionality of using race in order to protect the voices and the well being of minorities, one cannot argue the significance of the race-party clash which resurged with the argument and opinions of this case.  On one hand, the packing that occurred in Alabama’s redistricting softened the political voice of African Americans, however, the legislature softened their voice not because they were African-American, but because African-Americans are the most reliable Democratic voters. Most agree that judgment of a people based on skin color is wrong, but in today’s world a new and more difficult question must be asked: Can we judge individuals with a certain skin color based off the content of their character and political beliefs?

← The Freedom to Print Your Own Gun
Global Cyber Crime: Catching Overseas Hackers →