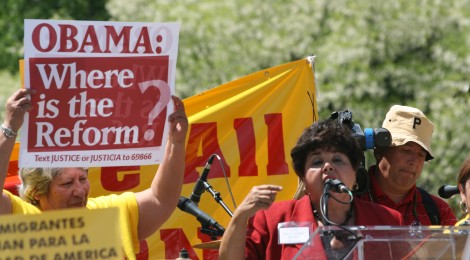 Both political parties had been trapped at an ideological impasse regarding immigration reform for several years, but on November 20th, President Barack Obama announced an executive action that would break a longstanding period of federal inaction on the issue. The sweeping order affects the legal citizenship status of several million people. Those who have been in the United States since before 2010 are now eligible to apply for three years of amnesty from deportation if they arrived before their sixteenth birthday or if they have at least one child who is legally permitted to reside in the country.[1] In other words, instead of legalizing these immigrants, Obama granted them “deferred action;” marking his administration’s most impactful measure on the issue. However, Obama has come under fire for both this executive action as well as his greater trajectory of his immigration policy from politicians on both sides of the aisle, who make distinctly different claims about the legality of the move. But what are the specifics of the legal arguments against him, and how does this one executive action play into the landscape of contention over the legality of immigration reform during his terms in office?

The recent announcement marks a total turnaround from Obama’s previous statements about potential executive actions on immigration reform. As recently as September 2013, he stated that expanding legal protections to larger groups of immigrants would essentially “be ignoring the law in a way that I think would be very difficult to defend legally.” In the form of legal protections or otherwise, Obama and Congress have failed on several occasions to successfully take initiative on the issue during the president’s terms in the Oval Office. His actions (or lack thereof) on immigration have consistently been subjected to varying legal criticisms. Obama was voted into office in 2008 after promising decisive action on immigration, garnering approximately 67% of the Hispanic vote. However, Congress did not pass any substantial bills on immigration in the years following; a special case was the narrow failure of the DREAM Act in 2010 in the Senate, which would have extended amnesty against deportation to the children of undocumented immigrants.[2] In 2012, a few months before his reelection, Obama finally took direct action via an executive order that overhauled the federal immigration policy at the time. It granted protection from deportation to undocumented immigrants under age thirty who met certain criteria and made them eligible for indefinitely-renewable two-year work permits. Nearly 800,000 people were impacted by the law.[3] To date, both chambers of Congress had not passed any bills on immigration primarily due to partisan disagreements, making Obama’s November executive action the second major legal action on immigration taken by the federal government since his inauguration and, perhaps, something of a move to counteract Congress’ lack of legislation.

Because members of the federal government had by and large been unable to collaborate on immigration policy, state governments began to claim increasing responsibility for crafting immigration laws themselves. Subsequently, since 2008, a number of legal battles related to immigration policy have arisen at the state level. The most notable of these is Arizona’s infamously stringent Senate Bill 1070, which was signed into law by Republican Governor Jan Brewer in April 2010 and instigated both fierce political turmoil and a number of similar policies in other states (which are primarily Southern and, for the most part, Republican-dominated: Georgia, South Carolina, Alabama, Utah, and Indiana).[4] SB 1070 made it a legal requirement for all immigrants to have their immigration documents on their person at all times, and permitted police to essentially detain any individual they believed to illegally residing in the United States. Legal scholars and civil rights groups, such as the Mexican American Legal Defense and Educational Fund, denounced the law as institutionalized racial profiling. Hiroshi Motomura, a professor of law at UCLA Law School, wrote that “this standard gives institutional cover for selective immigration enforcement through racial and ethnic profiling, and for this reason it will lead to constitutional violations if the statute goes into effect.”[5] In 2012, the Supreme Court decided Arizona et. al. v. the United States. Its ruling struck down several provisions of the law but left intact the police’s power to conduct citizenship status checks at any point.[6] Nonetheless, conservative critics continued to support the law, claiming for the most part that decisive action at the state level was needed to make up for the federal government’s inability to craft and pass immigration reforms.

Given the controversy over an immigration law at the state level, Obama’s relatively far-reaching November executive action has understandably been subject to wide-ranging legal criticisms. A number of conservative commentators have largely criticized this specific course of action as an overstep of presidential power, which recalls John Boehner’s lawsuit against him for overusing the power of the executive action to circumvent Congress (the suit, incidentally, was announced within an hour of Obama’s speech on immigration). Specifically, Obama’s use of prosecutorial discretion – especially since the executive action will impact several million immigrants – was labeled as excessive and something for which he does not have the “legal authority,” according to Texas Senator Ted Cruz.[7] All that said, it seems that Obama was simply following the longstanding presidential history of utilizing prosecutorial discretions in the context of immigration reform.[8] In his defense of the legality of Obama’s executive action, President Bill Clinton noted that “every president in the modern era has issued some executive action on immigration.” Presidents George H.W. Bush and George W. Bush both utilized the executive action to defer deportation of several hundred thousand immigrants; President Ronald Reagan rescinded the deportation of nearly a quarter-million Nicaraguan immigrants in 1987. However, these executive actions – and others enacted by Republican presidents – were in response to political crises that demanded immediate attention. This is likely why they were not criticized as oversteps of presidential power. Because the November executive action would also impact a larger volume of immigrants than have executive actions by past presidents, conservative politicians in particular have criticized the move legally as an abuse of the authority granted to the executive branch in the second article of the Constitution. The fact that Obama’s has a broader scope, and was simply in response to Congressional inaction, makes it an easier target.[9]