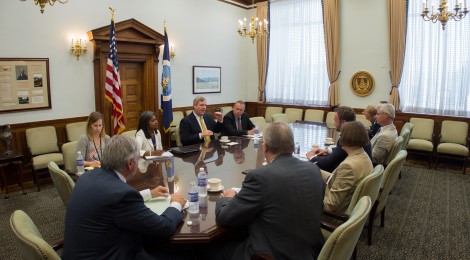 The United States is currently negotiating two regional trade agreements whose unprecedented geographical breadth would reshape world trade. The Transatlantic Trade and Investment Partnership (TTIP) with the European Union and the Trans-Pacific Partnership (TPP) with several nations in the region will legislate on a wide range of issues from agriculture to intellectual property, but most fundamentally both agreements attempt to lower barriers to trade. Although international law has encouraged free trade since the General Agreement on Tariffs and Trade (GATT) of 1947, the intention was to create a cohesive international system, where regional agreements were to be small exceptions. The prevalence of large overlapping regional trade agreements undermines the spirit of the GATT and World Trade Organization (WTO) to create an integrated, multilateral system of free trade.

GATT was first created to direct the  “substantial reduction of tariffs and other barriers to trade and to [eliminate] discriminatory treatment in international commerce.”[1] In this regard it was successful: after the first round of negotiations in Havana, Cuba countries reduced tariffs affecting a fifth of the world’s total trade, even though the GATT system lacked an institutional body until the creation of the WTO in 1994.[2] Primarily, GATT’s preamble cites such economic justifications for free trade, such as, “raising standards of living, ensuring full employment and a large and steadily growing volume of real income and effective demand, developing the full use of the resources of the world and expanding the production and exchange of good.”[3] The post-World War II signing of the document belies another justification, as well: economic interdependence through trade has often been thought of as a way to ensure peace.[4]

The principle of nondiscrimination is central to the multilateral trading system envisioned in GATT. The “Most-Favoured-Nation Treatment” clause, outlines the idea that “any advantage, favour, privilege or immunity” granted by one country in GATT to another, must be granted equally to all other GATT contracting parties.[5] This ensures that no country’s trading partner is given unfair benefits or disadvantages. This level playing field is essential to the potential economic benefit of free trade – only then can all countries have the same opportunity to compete in a country’s domestic market and specialize to their comparative advantages. Moreover, equal treatment also inhibits trade barriers from being raised in antagonism, encouraging more peaceful trade relations.

Despite nondiscrimination being fundamental to GATT’s multilateral system, Article 24 makes certain exceptions, including ones for regional trade agreements. These agreements violate the principle of nondiscrimination by definition – they give certain parties benefits without extending these advantages to others, which is why they are often called Preferential Trade Agreements.

Why make this exception to such a fundamental principle? As it so happens, this question has perplexed many, and some scholars have gone so far as to claim that the US introduced Article 24 during the original GATT negotiations as part of a cold war political move.[6] Officially, the WTO claims that the regional agreements allow countries to go beyond “what is possible at the time multilaterally”, and suggests that regional trade agreements are a testing ground for broader consensus.[7] In this context, the TPP and TTIP could be celebrated as the first step to a multilateral agreement.

Yet this article does not suggest this was the original reason for the exception of regional free trade agreements. Instead, it seems to be intended for developing “closer integration between the economies”[8] of countries that were already physically and politically tied together. A relevant regional arrangement of the time was the 1944 Benelux customs union; encompassing the tiny European countries of Belgium, Netherlands and Luxembourg, which made an inconsequential difference to world-trade. Another concern was to make arrangement for the separation of India and Pakistan, which had “long constituted an economic unit.”[9]

As these examples suggest, Article 24 was intended to give leeway for certain rare exceptions, not grand deals. Agreements are supposed to meet a set of provisions that ensures they facilitate trade between parties without raising trade barriers to others. In practice, however, these criteria are vague and the legal status of regional agreements is consistently uncertain. In only one case has it ever been possible to decide whether a regional arrangement meets these criteria.[10] Without the sanctioning and forbidding of regional trade deals, there has been a massive proliferation of trade deals since the inception of GATT, and the introduction of the WTO has only increased the pace. The WTO estimates that today over half of world trade is conducted through over 300 regional agreements.[11] Many trade deals are still too small to create much of a distortion. Others are large enough to have significant consequences. For example, the European Union and the North American Free Trade Association greatly influence world trade. The proposed TPP, including the US, China and many other pacific nations, and the TTIP including both the EU and the US, would have an impact on a similar, if not greater scale.

It is not clear if this proliferation of regional free trade agreements truly serve to increase trade overall rather than merely divert it between members. There are certainly many localized advantages to regional trade agreements: for all its current economic woes, the economic integration European Union has not only been credited with helping restore European economic strength, but also for preventing the great power rivalries of the past. Yet As free-trade proponent Jagdish Bhagwati claims, the complicated system of overlapping and inconsistent regional agreements may actually make trade more inefficient overall.[12]

All this suggests that regional trade agreements are a partial solution at best. To create an international trade system that is truly free, they must be better balanced with GATT’s principle of nondiscrimination. The WTO and international community should be cautious when evaluating regional trade agreements, particularly ones as wide-ranging as the TTP and TTIP. As a wider reform effort, the precise nature of Article 24 and its criteria should be better clarified.

[4] This notion can be traced at least as far back as the Baron de Montesqieu’s 1748 The Spirit of The Laws.