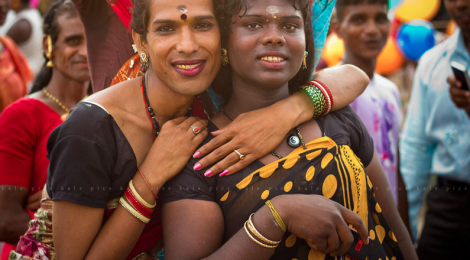 The Third Gender: Be Yourself, But Don’t Have Sex

In the United States, there is a strong debate over whether insurance companies should be required to cover sex change operations. This is a far cry from India where the debate is remarkably different. There, debate includes whether governments should even recognize the transgender community at all. In a landmark judgment in April 2014, India’s Supreme Court recognized a “third gender,” ruling that it was a human rights issue and that all human beings had a right to choose their gender[1]. Essentially, all Indian citizens were now allowed to classify themselves as male, female or a third gender. While thousands of activists celebrated in New Delhi, a country which had long denied the hijra community, a traditional community of transgender who play a role in Hindu customs, legal recognition, it only later dawned on many that this ruling had set up a rare legal conflict. In an earlier judgment, the Supreme Court had upheld a colonial era law titled section 377 that criminalizes acts involving “carnal intercourse against the order of nature[2]”, effectively outlawing homosexuality and the sexual rights of the transgender community. What this effectively means for the community is that while they have a right to choose their gender identity, they do not have the right to have sexual intercourse with a partner of their choice.

This has raised many interesting legal and ethical implications. The Supreme Court of India rarely issues judgments that come into direct conflict with each other, whether in terms of the end consequences of the decision itself or the reasoning behind arriving at a judgment.The fact that both these legal judgments create precedents, and derive heavily from foreign rulings makes the issue of both gender identity and sexual orientation a complicated one in India. The judgment upholding section 377for instance, says that the fact that the article is used to harass LGBT citizens is “the mere fact that the section is misused … is not a reflection of the vires the section.”[3] This comes in direct contrast with a later judgment of the Court, which said that “the moral failure lies in the society’s unwillingness to … embrace different gender identities and expressions.”[4] While the bench considering the legality of section 377 talked about the seemingly non-discriminatory implications of the law, the judgment considering recognition of the transgender community puts the bulk of the blame on the shoulders of societal value systems. This brings the entire debate to the realm of whether the rights of the individual are as important as those of the majority, even if these rights come into conflict with each other.

Perhaps the most critical manner in which these two verdicts directly oppose each other is this fundamental conflict in reasoning. While outlawing gay sex, the Supreme Court of India said “that a minuscule fraction of the country’s population constitute lesbians, gays, bisexuals or transgenders”, and that this could not be a “sound basis” to declare section 377 unconstitutional[5]. This reasoning immediately raised a flurry of angry responses from citizens and LGBT activists alike, who understood this to mean that the right of an individual could be taken away if that individual constituted a minority. Legal experts also became apprehensive about the implications the reasoning behind this judgment could have for the secular ideals of the Constitution of India. Directly countering this verdict was the judgment by the Court on gender identity, which maintained that transgenders, though insignificant in numbers, have human rights.[6]One Supreme Court judgment relied on the principles of equality and liberty adopted by the Constitution to grant legal rights to transgenders. The second judgment, however,noted warped government estimates of the size of the LGBT population – which estimate that there are only 2.5 million homosexuals in a country of 1.2 billion – to re-criminalize gay sex.

If the two judgments are looked at together, in context of the nature of the institution that delivered the verdicts, certain paradoxes would perhaps become more clear. The transgender judgment conveniently circumvented the issue of section 377, stating that “we express no opinion on [the section 377 verdict] since we are in these cases concerned with an altogether different issue pertaining to the constitutional and other legal rights of the transgender community and their gender identity and sexual orientation.”[7] To many, this very statement is troubling: is sexual orientation not innately linked with who an individual chooses to have sex with? By implication, this judgment assumes no link between sexual orientation and sexual preference. This makes the issue of section 377 and gender identity far more complicated because it can now be argued that while individuals have a right to “be” they do not have a right to enjoy those very same rights as equal citizens.

India’s society remains deeply divided over the issue of homosexuality and transgender rights, which some argue is reflected in its judiciary. The hearings for a curative petition of the judgment that re-criminalized gay sex is currently underway, but there is little chance of the verdict being overturned given that a gross bias must be proven evident. Whether the country ultimately overturns the verdict overturning the verdict criminalizing homosexuality,under the helm of the newly elected Narendra Modi government, remains to be seen. Until then, India’s large transgender community remains in a rather uncomfortable situation. In the United States, the debate is progressing rapidly and today, individuals across the country are allowed to be who they are and love who they want to love. While referendums and the legislatures have contributed significantly to this progress, a large part of the initiative has come from the courts. For India, the ultimate solution to the legal conflict set up by these judgments might have to be legislated upon by the Parliament, however, since the country’s highest court has set up the conflict in the first place. Whether the conservative parliamentarians who make up the majority will pay heed to cultural bigotry or decide to grant millions of Indians the right to be who they are remains unclear.

← Donations in Politics: How much is too much?
Checks and Balances? Evaluating Litigation against the President →