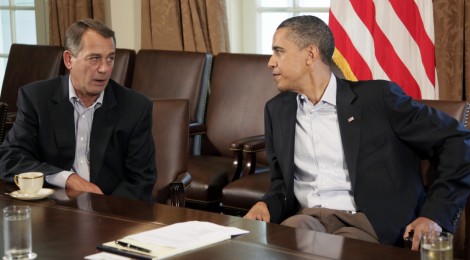 Checks and Balances? Evaluating Litigation against the President

Alicia Schleifman / August 5, 2014 / Comments Off on Checks and Balances? Evaluating Litigation against the President / Online, Summer 2014

To even the casual observer, congressional gridlock is an old headline, as is the strained relationship between Congress and President Barack Obama. However, on June 25, 2014, Republican Speaker John Boehner offered an unconventional response to the president’s approach to the problem: litigation. Boehner alleges that Obama has habitually utilized executive power to circumvent congressional approval throughout his two terms in office. As Boehner wrote in an opinion piece for CNN, the president’s “flippant dismissal of the Constitution” can only be satisfactorily addressed through a lawsuit that, if successful, would require Obama to “faithfully execute the laws of our country.” Now the House has voted to authorize Boehner to move forward. But which laws does Boehner argue have Obama violated, and what is the likelihood that the suit will advance? If it were allowed to move forward, what precedent would it set?

Boehner initially provided vague reasoning when justifying his proposed legal action. Though he has not publicly referred to the specific section of the Constitution he believes Obama has violated, one can assume his focus is on the separation of powers delineated in its first three articles. The executive order is just one check that the president may use to ensure the balance of power among the three branches of government. Though not explicitly enumerated as a right of the executive branch, executive orders have become commonplace as the literal manifestation of the president’s constitutional duty to “take care that the laws be faithfully executed.” The first Supreme Court case ever brought against a president – Mississippi v. Andrew Johnson, in 1867 – challenged his ability to enforce Reconstruction via executive order. The Court ruled in Johnson’s favor. However, Boehner claims that Obama’s use of executive action allows him to bypass his responsibility to obtain congressional approval and avoid carrying out laws that Congress has passed. For example, in 2012, Obama used this executive power to allow undocumented child immigrants to remain in the country without risk of deportation. Boehner implies that Obama’s “overuse” of executive power disrupts the system of federal checks and balances, at least between the executive and legislative branches.

Because this is the first lawsuit of its kind against a sitting president[1], if successful, it will set a crippling precedent for all future presidential administrations (although it is unlikely the case will be decided before the end of Obama’s term). Although much of the media portrayal of Boehner’s proposed case has centered on Obama’s executive orders, he has not named these orders as a specific reason for his desire to file the suit. In his initial statements about the lawsuit, and in much of the dialogue that followed, Boehner referred almost exclusively to “executive action.” Obama has signed fewer executive orders than his two most recent predecessors, and he has passed fewer executive orders per day than any president since Grover Cleveland. As a result, the case appears more about the president’s use of executive power as a whole. A ruling in Boehner’s favor could dramatically curtail Obama’s – and any future president’s – ability to override congressional will via executive power, or even to carry out relatively uncontroversial duties. (The majority of the executive orders Obama has signed so far are administrative in nature.) In some cases, this could be considered tipping the scales of the checks and balances system solidly in Congress’s favor. A Democratic Congress could much more easily sue a Republican president if the former finds the latter to be unsatisfactorily implementing a law spearheaded by Democrats. The opposite is also true.

Yet historical precedent does not seem to be on Boehner’s side and earning standing will be the case’s most significant hurdle. Though a number of legislators have attempted to sue past presidents (generally for either implementing an executive order they find to be inappropriate, or for failing to implement a law), neither chamber of Congress has ever successfully proceeded with a suit. Members of Congress who have tried are nearly always denied standing in their cases: for a plaintiff to be granted standing in a federal court, they must have experienced demonstrable harm. In 1999, for example, then-Representative Tom Campbell and sixteen other lawmakers sued President Bill Clinton for infringing upon the War Powers Resolution as it related to the conflict in Kosovo. Their case was dismissed pre-trial for lack of standing. Further, judges are often reluctant to grant members of Congress standing because they have the ability to check the president’s power without directly involving the justice department through legislative powers outlined in Article I. Elizabeth Price Foley and David Rivkin, the eventual chief architects of the case, have suggested that Boehner employ one of a few narrow strategies to achieve standing, such as claiming that a specific action on Obama’s part has caused institutional damage to Congress as a whole. He took their advice: on July 24th, the House Rules Committee voted to authorize the suit, which raises issue specifically with the president’s decision to postpone the employer mandate of the Affordable Care Act. Authorization then passed six days later in the Republican-dominated House of Representatives. But the suit’s success in Congress is more than anything else a testament to the body’s paralyzing partisanship, which may very well be viewed as one of the reasons why Obama began utilizing the executive order in such a polarizing manner. The House’s stamp of approval should not be regarded as an indicator of the suit’s actual legal viability. As Harvard Law School professor Jack Goldsmith writes, the case “will almost certainly fail, and should fail, for lack of congressional standing.”

[1] Though infrequently successful, suits against presidents are relatively common – from both civilians and lawmakers. Congress has never sued a sitting president before, but groups of congressmen have; as mentioned before, courts continually dismiss these cases for lack of standing. However, filing and proceeding with lawsuits against the president is no less easier for the average citizen. Take, for example, the Supreme Court’s 1982 ruling in the Nixon vs. Fitzgerald case. In 1968, A. Ernest Fitzgerald, a contractor for the United States Air Force, testified before Congress about inefficiencies and cost overruns in the production of a C-5A plane. Approximately one year later, he was fired; then-President Nixon assumed responsibility for his dismissal. When the Civil Service Commission determined his termination was unwarranted, he sued Nixon. The Supreme Court ruled in Nixon’s favor. According to the majority opinion, penned by Justice Lewis F. Powell, Jr., “the President is entitled to absolute immunity from damages liability predicated on his official acts.”

← The Third Gender: Be Yourself, But Don’t Have Sex
CULR’s Summer Legal Internships →