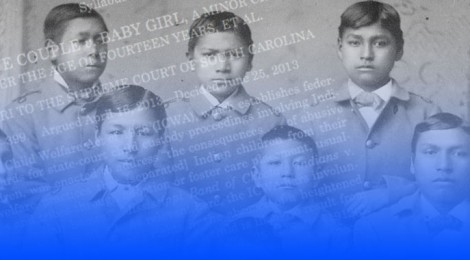 Whose Baby is It Anyway?

Adoption cases in the United States have always been relatively complex and often muddled in jurisdictional debates. On June 25, 2013, the Supreme Court ended one of these debates with the controversial Adoptive Parents vs. Baby Girl decision. The decision was passed on a narrow 5-4 vote with the majority siding with the adoptive parents.

“Baby Veronica” was a pseudonym given to the subject of this dispute, a baby girl adopted by a South Carolinian couple in 2009. Initially, both of the baby’s biological parents consented to relinquishing their parental rights. However, upon receiving notice of her impending adoption, the baby’s biological father quickly changed his mind and filed for custody of his daughter. What began as a custody battle soon escalated into a national debate. Baby Veronica’s father, Dustin Brown, is a member of the Cherokee Nation and contested that her adoption was unconstitutional due to the Indian Child Welfare Act (ICWA), a measure passed in 1978 to protect the parental rights of Native Americans. Over the course of the next two years, the girl was shuffled between the two parties, as appeals were filed and each court gave a different verdict than the previous one. This emotionally charged case gained a lot of traction in the media as different support groups got involved to make arguments for both sides. Eventually, the Supreme Court ruled that the ICWA had no bearing on the current case, much to the dismay of the Cherokees.

The Indian Child Welfare Act was passed in the late 1970s because a large number of children had been forcibly removed from traditional Native American homes. Prior to the enactment of this law, approximately one in every four Native American children were being removed from their homes and placed in the care of other families or into foster homes. The prevalence of this practice, as revealed by this shocking statistic, led to the implementation of the IWCA. The act gives tribal governments exclusive jurisdiction over child custody cases when it is determined that the child “resides on, or is domiciled on, the [Native American] reservation, or when the child is a ward of the tribe.” This measure has helped tribes maintain an adequate level of oversight regarding the welfare of Native American children.

Both Brown and the Cherokee Nation believed that this measure gave him custody rights over his biological daughter, because the tribe should have been exulted in the adoption proceedings. In fact, in a similar Supreme Court case in 1989, Mississippi Band of Choctaw Indians v. Holyfield, the court asserted that the ICWA was the governing law for all proceedings surrounding the adoption of Native American children. However, in the Adoptive Couple case, two primary concerns were brought up: the first being whether a non-custodial parent can use the IWCA to block a lawfully initiated abortion, and the second being whether Brown actually qualified as a “parent” under the definition of the IWCA, considering that he had not complied with the state laws required for him to attain legal status as parent.

The  Adoptive Parents vs. Baby Girl decision shocked the Cherokee Nation, who believe that the decision is the first step in the diminishment of their jurisdictional authority over Native American children. Members of the tribe, including the biological father, believe that the decision of the Supreme Court undermined the authority of the power allotted to the tribe under the ICWA.  The tribe is worried that this verdict will set an unhealthy precedent in establishing their role in future adoption cases.

Following the decision, the adoptive couple sued the Cherokee Nation, as well as the baby’s biological father, for nearly one million dollars as reparation for the costly, four-year custody battle. The Cherokee Nation was outraged because, in their opinion, it shows that they can be bullied into silence by the “all powerful adoption industry.” A representative from the tribe released a statement condemning the lawsuit as a threat warning the tribe against intervention in adoption cases. However, regardless of the outcome of the civil suit, the Cherokee Nation has indicated that they will continue to fight for the jurisdiction allocated to them by the Indian Child Welfare Act. A similar case has arisen in Oklahoma regarding a “baby Deseray,” which, unlike baby Veronica’s case, will not go to the Supreme, but is also likely to require funding from the tribe to settle the dispute.

The Adoptive Parents vs. Baby Girl decision is one of the most contentious court decisions in recent times. The emotional nature of the case kept ensured its prevalence in mainstream media. Though this decision seems like a harsh blow to the Indian Child Welfare Act, it is very unlikely that the jurisdictional influence of Native American tribes over adoption cases will disappear in the near future.

← Green or Just Greedy?
“Kids Will Be Kids”: A Legal Precedent? →