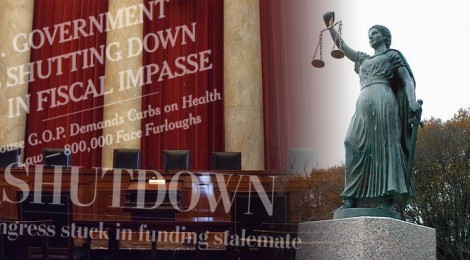 It is often said that the wheels of justice turn slowly, but when the federal government shut down on October 1, 2013, were they ever at risk of grinding to a halt?

The effect of political partisanship manifested itself in the suspension of routine government operations and the furlough of approximately 800,000 public servants. Congress’ inability to pass a spending bill for the 2014 fiscal year curtailed almost all government positions and institutions not deemed essential. Amongst these were the employees, programs, and facilities of the federal judiciary. The loss of federal funding put a considerable strain on the judicial process. Making use of an ever-dwindling reserve fund, the operations of the country’s justice system were barely able to proceed.

The federal court system continued to function through the first two weeks of the shutdown as officials in the justice system resorted to contingency funding. With the autonomy to manage their own budgets, judicial districts utilized this money to maintain operations, with some deeming all staff essential and avoiding layoffs. This funding allowed the US Supreme Court building to remain open to tourists while many other federal buildings were closed. On October 1, the administrative office of the United States Courts announced that the judiciary had the capability to operate for ten business days. The chief judges of district courts were instructed to classify both cases and personnel as essential or non-essential.

Amongst the caseloads piling up on the dockets of these justices across the country were thousands of criminal cases. Criminal cases, under the Sixth Amendment, must be heard in a “speedy” fashion. The federal judiciary is bound by the Constitution to hear these cases, with or without funding. Like the cases they work on, district court employees who handle criminal cases were considered important enough to maintain at a normal level of operation. Prosecutors, district court staff, and federal agency experts involved in civil cases, on the other hand, became victims of the shutdown furloughs. US attorneys asked federal court judges to put some or all of their civil cases on hold. The extent of delay on civil cases depended on the district and the priority of individual cases. Immigration court cases in particular, however, saw widespread delays. Any immigration case that did not involve a detained party was put on hold.

Federal funding is used not only to run the courts, but also to provide defendants with their constitutionally protected rights. In addition to a speedy trial, the Sixth Amendment assures the right to counsel and trial by jury. For someone who cannot secure an attorney of his own, a public defender is assigned to his case. The shutdown only compounded existing issues of insufficient representation and compensation in public defense. Constrained by ever tightening budgets before the shutdown, these cases were frequently assigned to private attorneys, paid for their work by the government. However, with the shutdown, the already insufficient funds used to pay these attorneys ran out. There were concerns that funding for juror reimbursement might also run dry if the shutdown continued. The courts managed to avoid compensating jurors with IOUs, as the shutdown was resolved before reserve reimbursement money ran out. But with each day that the shutdown persisted, the issue of preserving these services, and, in doing so, protecting citizens’ constitutional rights, became more pressing.

Nevertheless, the US Supreme Court continued to operate as normal, hearing a full docket of cases regarding critical constitutional issues. On October 7, nearly a week into the shutdown, the justices began a new term as usual. At this time, the court announced that it planned to carry on with hearings through October 11, at which point, if the shutdown had not ended, the Court’s status would be examined and an update would be issued. In its first week in session, the Supreme Court heard oral arguments. The Office of the Solicitor General, which represents the federal government in litigation, retained all of its attorneys as paid staff to prepare for and present in these arguments. On October 10, the court announced it would continue uninterrupted operation through the 18th, despite the shutdown, hearing another full week of oral arguments.

On October 16, President Obama signed a bill to fund the government through January 15, ending the shutdown. This sixteen day shutdown highlighted many issues the federal court system faces regarding its funding. The judiciary contends with an issue of high demand for resource and low supply. Its facilities, employees, and juries are all both necessary and costly. In the wake of this shutdown any reserve funds have been all but exhausted. This lack of funding may put some of the most fundamental constitutional rights of citizens at risk, threatening the speed at which a case goes to trial, the provision of public defense attorneys, and the adjudication of an impartial jury. As Congress continues to push its debt ceiling and budget agreements, the future of federal funding to the judiciary is anything but certain.