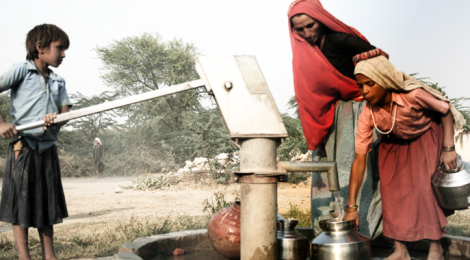 On July 28, 2010, the United Nations General Assembly passed Resolution 64/292, which explicitly recognized the human right to water and sanitation and declared that clean drinking water is crucial to the realization of all human rights. The resolution was prompted by an increase in water-related conflicts around the world due to widespread water shortages. As it stands, 884 million people do not have access to safe drinking water, and 2.6 billion people lack access to basic sanitation. By 2050, the world’s population will reach 9.1 billion, 34 percent higher than today, and nearly all of this population increase will occur in developing countries. Even today, many developing countries are struggling with the task of providing their citizens with safe drinking water in the face of diminishing water resources and a growing population.

India faces a particularly turbulent water future. By 2050, India’s population is projected to be 1.69 billion, 38 million larger than China’s projected population of 1.31 billion. Due to aggressive farming, expanding industry, and, of course, their growing population, India’s demand for water and water consumption has also gone up significantly in the past few decades. To accommodate for the increased demand for water, India has become largely reliant on its supply of groundwater. However, India’s groundwater supply, like all groundwater supplies, is finite, and India is drying up at an alarming rate. As a result, India’s newest challenge is to figure out how to apportion the water they have between its industry, its agriculture, and its public, which raises the question: how does a country go about creating a legal right to water?

While much emphasis has been put on how India’s water shortages put the rural poor at an extreme disadvantage, there has been little consideration on how water legislation in India leaves the poor legally defenseless, and with no claim or right to any of the country’s water. This will become increasingly problematic in the ensuing years, as the battle for water between industry, agriculture, and people has already begun to unfold in its High Courts. Every citizen’s legal right to “safe drinking water” is recognized under Article 21 of the Constitution of India. In the past few years, courts have delivered a growing body of verdicts on the right to safe drinking water as a fundamental right, predominantly in cases where inadequate water supply to different cities was legally challenged.

For the most part, the Court has upheld the right to water under Article 21. In one of the earlier cases relating to unclean drinking water in the city of Guwahati in 2000, the Court resolved that water is essential for life, therefore protected under Article 21 of the Constitution. The Court held that the Guwahati government was responsible for providing its citizens with safe drinking water even after the government filed in a counter affidavit that it could not supply safe water due to financial constraints. Similarly, in S.K. Garg v. State of Uttar Pradesh (2001), the High Court reiterated the fundamental right to drinking water, stating that the need for a decent and civilized life included the right to food, water, and decent environment. In Delhi Water Supply and Sewage Disposal Undertaking v. State of Haryana (1996), the Court went as far as to state that drinking is the most important use of water, above irrigation and industry. Finally, in Vishala Kochi Kudivella Samrakshana Samithi v. State of Kerala (2006), the Kerala High Court acknowledged the grievances of the people of West Kochi who had been fighting for clean water for over three decades. In an attempt to further solidify safe drinking water’s place as India’s most important issue, the Court expressed, “no hesitation to hold that failure of the State to provide safe drinking water to the citizens in adequate quantities would amount to violation of the fundamental right to life enshrined in Article 21 of the Constitution of India and would be a violation of human rights. Therefore, every Government, which has its priorities right, should give foremost importance to providing safe drinking water even at the cost of other development programmes. Nothing shall stand in its way whether it is lack of funds or other infrastructure.” Pursuant to these decisions, the Allahabad High Court directed the creation of a high powered committee with the sole purpose of examining the issue of water access and discussing possible solutions.

Although these particular cases in the late 1990s and early 2000s made it clear that the fundamental right to water is judicially upheld, more recent cases have been able to exploit the fact that Article 21 never explicitly states that each citizen has a right to safe drinking water. In fact, this glaring error was caught in 2002, when the National Commission that reviewed the Constitution recommended a new article. Article 30D would have stated, “every person shall have the right to safe drinking water.” In the midst of political turmoil and weakening infrastructure, this potential addition has been overlooked.

It is imperative that the change be made now, as the implication of this right has become increasingly important. That is to say, with water shortages worsening, every person may have a right to water, but there are no guidelines as to how much water and for what price. In the 2010 U.N. resolution, it was estimated that every person requires between 50 and 100 liters of water per person per day and that water costs should not exceed 3% of household income. However, in India along with many other developing countries, there are no legal guidelines supporting the U.N.’s resolution. While it is certainly important to focus now on giving Indian citizens access to safe drinking water through the creation of wells among other water infrastructure, without immediate revision to water legislation, said infrastructure will become virtually useless in the face of massive drought, and citizens, especially the rural poor, will not have legal claim over the fundamental human right to water.