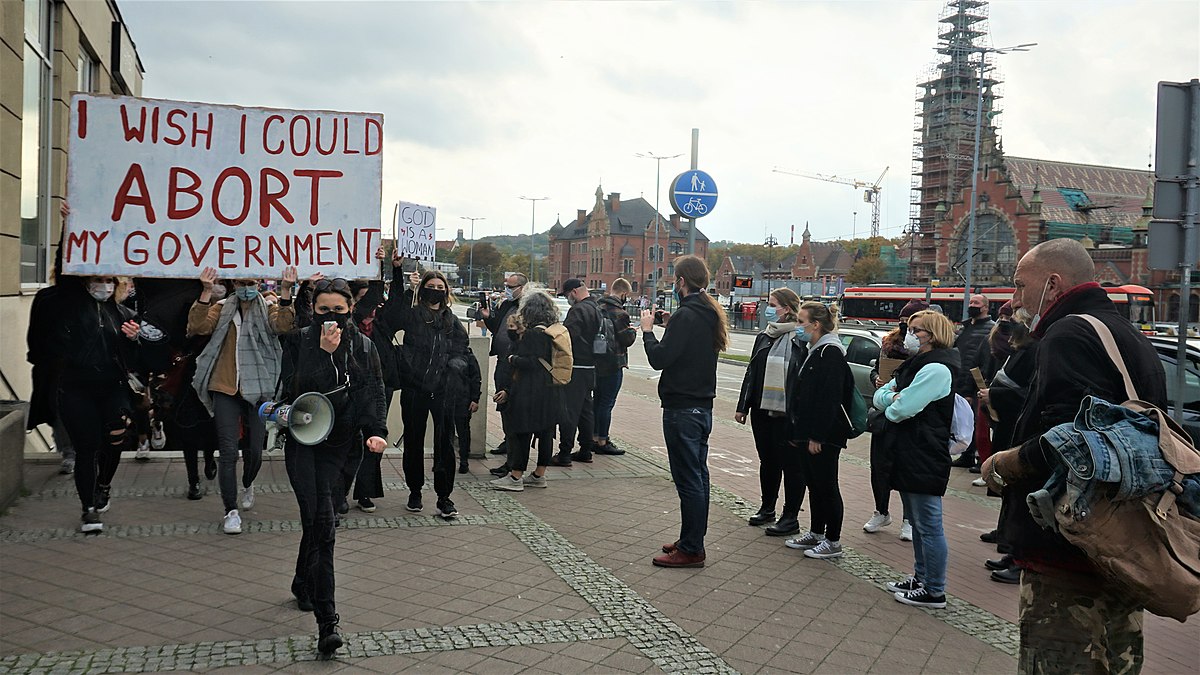 By Ali Cain, RightsViews staff writer and a graduate student in the European History, Politics, and Society  MA Program

Over the last three weeks, Polish citizens have ignited the country’s biggest protests since the 1989 pro-democracy movement in response to the passing of a de facto abortion ban. Although Poland already had the most restrictive abortion laws in Europe, its highest court, the Constitutional Tribunal, concluded that performing abortions, even in situations where a baby would be born sick or disabled, violates the Constitution’s guarantee to the protection of life. This ruling poses immense infringements on women’s rights and pushes the country into deeper democratic backsliding.

Despite Polish President Andrzej Duda announcing that the ban would be delayed indefinitely, protests have developed into a larger retaliation against the ruling far-right Law and Justice Party (PiS). Since its rise to power in 2015, the Party maintains support by enflaming cultural tensions over LGBTQ+ rights, migration, and abortion. Prior to the Tribunal’s ruling, women were only allowed to get abortions in cases of rape, incest or fetus abnormalities. According to The New York Times, the majority of legally terminated Polish pregnancies in 2019 were because of fetus abnormalities. Doctors are also able to use religious beliefs to justify not performing abortions or prescribing contraception. Poland’s restrictions led many women to seek abortions in other countries or illegally.

Since the decision, thousands of Poles in 150 towns and cities have turned out to protest. Demands include access to abortion, non-religious sex education, and the transfer of Church funds to groups fighting violence against women. As the protests grow, President Duda proposed an exception to the Tribunal’s ruling that would allow abortions when there is “high probability” of the fetus being stillborn or being born with a condition “leading inevitably and directly to death.” He later announced that the new laws would be delayed indefinitely and is currently attempting to find a compromise between the far-right wing of PiS and its less extreme parliament members. However, the protests are now past the issue of abortion as various groups with grievances against PiS are heightening calls for the government’s resignation.

The PiS’ control over the Tribunal is one of many examples of how the Party has infringed on the rule of law. Since coming to power, PiS has slowly eroded judicial independence; in 2017, the Party mandated a lower retirement age that dismissed half of the Polish Supreme Court’s justices. It then took over the National Council of the Judiciary which appoints judges and made it illegal for judges to complain about the PiS. The Tribunal is packed with judges that support the PiS as the Party attempts to use the judicial system, instead of the parliament, to encroach on human rights and create a state that is reflective of a strong nationalist, pro-Catholic identity.

The European Union (EU) has yet to respond to the Tribunal’s ruling or the protests in Poland. Nonetheless, Poland’s democratic backsliding has not gone unnoticed as the rule of law is one of the EU’s core values.

For the first time in EU history, Article 7 of the Treaty of the European Union was triggered in response to the 2017 judicial overhaul. This article, which is used when a member state violates the Union’s main tenants, allows the European Council to give a formal warning to a country,  issue sanctions and revoke a member state’s voting rights in the Council if the country fails to reform. In 2017, the European Commission released recommendations for Poland on how it could address its rule of law breaches by reversing many of its judicial policies. Not surprisingly, these recommendations went ignored.

The EU has recently expressed concern at two other developments in Poland: the creation of “LGBTQ+ free” zones in cities and towns, and President Duda’s re-election. When the EU responded to the “LGBTQ+ free” zones by cutting off funding to 6 of the 100+ towns with zones, Poland supplemented the lack of EU funding with state support. The June 2020 election, which Duda won narrowly, came under scrutiny due to difficulties in voters receiving absentee ballots and pro-PiS news coverage by media groups supportive of the government.

European institutions, especially the Commission, have desperately tried to develop mechanisms to hold Poland accountable. The Commission released its first report on the rule of law in October 2020 and the Council is tying COVID-19 aid to respect for the rule of law. The Polish government openly rejected the Commission’s rule of law report and argued the EU was infringing on its sovereignty. On November 16, Poland and Hungary vetoed the Multiannual Financial Framework (MFF), which is the EU’s 2021-2027 €1.8 trillion budget that includes the EU Economic Recovery Plan, over the inclusion of a rule of law mechanism. It took member states months to negotiate both the Economic Recovery Plan and MFF; the veto has already  garnered immense criticism from many member states desperately in need of aid. It will likely cause outrage among Polish and Hungarian citizens who are financially struggling due to the pandemic.

Although PiS tends to invoke Eurosceptic rhetoric, it has more to lose in fighting with the EU than to gain. According to The Guardian, no country has seen greater financial benefits from EU membership than Poland. Besides the benefits in trade, agricultural subsidies, and infrastructure funds that the country receives from the EU, Poland also expects to receive over €139 billion in grants from the EU’s upcoming budget. The government has already started public consultations on projects to spend its recovery funding on. Additionally, the majority of Polish citizens support the EU; a 2019 Pew Research poll found that 84% of Poles had a favorable opinion of the EU. It would be unwise for the Duda regime to continue challenging the EU when it has benefitted significantly from its membership.

Human rights in Poland are now at a crossroads. The abortion ban shows how far PiS has gone in influencing and reshaping the Polish judiciary to discard the rule of law. However, the government’s delay in imposing the ban due to the massive protests demonstrates that Duda and PiS are not above public opinion. Now is the time for the EU to both step up its public support of the protests and find new ways to hold Poland accountable. . In early November, the European Parliament agreed to a deal with Germany that would require a qualified majority vote in decisions on cutting member state’s funds. Usually, Council decisions must be approved by unanimity, posing an accountability challenge as Hungary consistently vetoes sanctions against Poland. Even though the bar remains high in achieving a qualified majority, more states are expressing concern that their citizens’ tax-dollars are going to other member states who do not respect the rule of law. As a result of this agreement, states were able to use qualified majority voting to include the rule of law mechanism in the budget.

Although the introduction of qualified majority voting wasn’t enough to block Hungary and Poland’s vetoes, it lays the foundation for further discussions of how to change the EU’s voting rules to hold countries accountable. If Poland and Hungary insist on continuing to block the MFF, the EU should start considering treaty changes or other agreements that would allow for more flexibility in voting in order to bypass vetoes.

As president of the European Council, Germany should take the lead in using its diplomatic and negotiation finesse to pressure Hungary and Poland to allow the budget to go forward as any further delays in aid distribution will impose greater short term and long term economic challenges for EU member states. The abortion protests, Duda’s narrow re-election, rising COVID-19 cases, and World Bank projections that forecast a recession in Poland puts PiS in a precarious position. The current protest movement is providing a genuine challenge to the government and the EU must use this opportunity to continue to prevent further democratic backsliding.