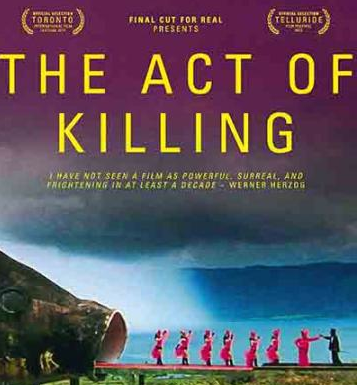 A Review of The Act of Killing (2012): Trauma, Memory, and the Power of Filmmaking

On March 8, 2014, Columbia’s School of the Arts, in collaboration with the Institute for the Study of Human Rights (ISHR), screened Joshua Oppenheimer’s 2012 documentary, The Act of Killing. This film was shortlisted for a 2014 Academy Award nomination for Best Documentary. On this evening, the audience had the chance to see the Director’s Cut and ask Oppenheimer questions regarding trauma, memory, and the power of filmmaking.

In 1965, Anwar Congo and Adi Zulkadry—Indonesian “gangsters” deriving their label from the English “free men” meaning to live on without punishment from the criminal justice system—accepted their role as leaders of the most well known killing squad in North Sumatra. In The Act of Killing, Oppenheimer invites these two gangsters and their comrades to reenact their assassinations of Chinese communists. They seem eager to create a film that uses humor and romance, as well as inspiration from their favorite movie genres like Westerns and musicals. In fact, they decide that they want to create more sadistic scenes than those that can be found in movies about Nazis, as well as more action scenes than those typical of James Bond films. Despite these disconnected intentions, the documentary effectively puts forth three important themes: the effects of trauma, the importance of memory, and the power of filmmaking. Unlike his comrades, Anwar—the main executioner—fails to hide his pain. Although he dances the cha-cha, drinks alcohol, smokes marijuana, or dresses to impress, when it comes time for him to play a victim, he breaks down. He says that he feels what his victims must have felt and describes feeling as if he “were dead for a moment.” Although Oppenheimer points out that the victims’ torture was much worse because they knew that they were going die, Anwar tearfully says that he does not want the memories of what he did to come back to him. In fact, when he revisits the rooftop where he claims many of his killings took place, Anwar gags repeatedly and then asks himself, “Why did I have to kill them? I had to kill… My conscience told me that they had to be killed.” His memories continue to haunt him during a reenactment of a burning village.  Never expecting the scene would look so awful, he believes his victims have “curse[d] [him] for the rest of [his life],” meaning karma will come back to haunt him, whether during this lifetime or in his dreams. Anwar faces nightmares. He dreams about repeating his invented, simple method of wrapping a wire around his victim’s neck and pulling the wire from one end, suffocating the victim without a “bloody mess.” By using this method to kill almost 1,000 people, Anwar repeatedly dreams that he meets the ghosts of his victims face-to-face.

Oppenheimer wished to create a film that would force the Indonesian perpetrators to acknowledge that they killed thousands of communists, crimes for which they have not been held accountable. Thus, by allowing them to reenact their crimes in the manner and style in which they remember them, unlike a historical narrative, Oppenheimer tried to make “a documentary of imagination.” In other words, the film tries to blur the usual good vs. evil narrative often seen in this genre. As a result, the audience gets the chance to understand the perpetrators; in this case, Anwar is not solely a “killing machine” but has the capacity to repent for his past atrocities. Hence, the film argues that humans are complex and difficult to understand—Anwar appears proud to have been involved in events that have defined Indonesia but, at the same time, becomes ashamed when the victims’ families confront his actions. As Oppenheimer noted during the discussion, we all have a link to the perpetrators; in this case, when we buy products made from Indonesian palm oil, part of the cost goes to the Indonesian perpetrators, many having positions within the Indonesian government.

Oppenheimer’s The Act of Killing attempts to bring the Indonesian genocide to light through the reenactments of the former anti-communist perpetrators. Although Anwar shows signs of trauma, he and the gangsters continue to live as “free men,” or as one of them says, a life of “relax and Rolex.” Moreover, these gangsters believe that although they strangled their victims with a wire, they “were allowed to do it” and “the proof is [they] murdered people and were never punished.” In fact, for the people killed, they say, “there’s nothing to be done about it” and the victims “have to accept it.” As a result, many “never felt guilty, never been depressed, never had nightmares.”

One can only hope that The Act of Killing influences the Indonesian government and the international community to hold these “free men,” “gangsters,” “perpetrators,” or whatever else they call themselves, accountable for war crimes.

Daniel Golebiewski is a graduate student at Columbia University where he is pursuing a Master of Arts in Human Rights Studies. His interests are transitional justice and memory through the arts.

Reza sits on the couch in the reception area of KRuHA’s shared office in South Jakarta, chatting with two visiting PhD researchers about the current state of Jakarta’s water crisis. KRuHA is the Indonesian language acronym for the People’s Coalition for the Right to Water, and, with the help of an SYLFF Summer Research Grant, I travelled to Jakarta in August to research Indonesia’s small, but vocal, water justice movement. Specifically I was interested in how this movement was engaging the human right to water (see another blog post of mine on the evolution of this new right) as an advocacy tool, and the sorts of opportunities and challenges the human rights framework might present organizations like KRuHA. It’s common for students, journalists and fellow NGO activists to drop by this small office and discuss the country’s ongoing water woes, particularly those faced by Jakarta – drought, worsening pollution and decreasing quality of drinking water, increasing tariffs, and intermittent supply. These discussions do not, however, revolve around the technical aspects of water stress in Southeast Asia’s largest city; rather Reza and his colleague Hamong are concerned about what they see as an unjust system of water governance that favors corporate rather than public interests.

KRuHA describes itself as a water justice organization. Its overarching goal is to challenge the involvement of for-profit, private companies in the governance and exploitation of Indonesia’s troubled water resources. To this end, their major campaigns focus on ending the contract between the Jakarta Government and two foreign water utility companies, of which the World Bank was a key architect, and opposing the bottled water industry’s growing domination of natural springs around Java Island.

Below is a recent campaign video by KRuHA designed to raise awareness about water inequality, and promote their organizational profile.

The fight against commercialization

Upon meeting the 3 fulltime staff at KRuHA, and speaking with some of their academic affiliates, I gained a clear understanding of the struggles of an under-funded and over-worked NGO, whose colossal goal is to challenge the global economic system’s most powerful entities – the World Bank, WTO, and multi-national corporations. The central claim that KRuHA makes is that water is indispensible for human life and should, therefore, be stewarded by government in the best interests of its citizens. The commercialization of water, according to KRuHA, is morally unjust; it represents the ongoing accumulation of public goods for private (and often foreign) profit, and violates a fundamental human right. In the past, KRuHA, and its network of left-leaning, anti-globalization organizations, fought the battle against water-privatization in the courts. They made the case that new water laws introduced in 2004, designed by a World Bank working group, facilitated privatization of water utilities and enabled the commercialization of water resources. KRuHA argued these laws violated Indonesia’s Constitution, which articulates that government is the protector and steward of the people’s natural resources. But they lost this battle in the Constitutional Court, and ever since have been re-assessing the best way to campaign against the forces of commercialization.

After a few visits to KRuHA, I decided to cast my net wider, and conduct interviews not only with activists, but also with urban planners, development workers and representatives from Indonesia’s bottled water industry. I wanted to get a broader picture of how stakeholders in the water sector viewed organizations like KRuHA.

I was struck by the vibrancy of this sector – despite having heard frequently that Jakarta’s water system was a ‘total mess’. Conversations ran from the Australian government’s new emphasis on water infrastructure, to the World Bank’s turn toward community-based water management and public private partnerships, to the use of crowd-sourcing tools to extract information about water quality in remote areas. Everyone seemed to be getting communities involved, engaging people at the grassroots level in the management of their own water supplies. Women hold signs at the protest calling for the human right to water to be fulfilled, and for privatization of water to be stopped

While most people in the sector did not see the new human right to water as explicitly guiding their policies or programs, I began making connections between the discourse of water as a human right, and water as a community-governed resource. In the end, my ‘wide net’ method returned a lot of interesting data, but probably served to confuse, rather than narrow, my research interests.

Back to the desk

Upon my return to New York I’ve been sifting through my data, and decided to return to my original case study: the Indonesian water justice movement’s opposition to the bottled water industry. This was actually a campaign that first took off in Canada and the US, but has spread to many different parts of the globe. What’s interesting about the Indonesia case is that a growing proportion of the population, particularly in urban areas, is increasingly dependent on the bottle for access to clean water. So launching a struggle against large, profitable companies like French-owned Aqua-Danone (which dominates the Indonesian market) is not an easy task. Conflicts have emerged around several Aqua-Danone factories in recent years, with farmers accusing the company of over-extracting water and exacerbating water stress in the area. The company has attempted to placate the communities with targeted CSR programs.

Now I’m deep in the abstract world of academic theory, buried in the literature on social movements, human rights activism and corporate social responsibility. I’m so grateful I had the opportunity to go to the field and meet with people who are actually engaged in these struggles on a daily basis. It reminds me that I’m writing about people, not just theories! The people I met at KRuHA, and their friends working on water justice issues in Indonesia, are dedicated to maintaining water as a shared, public resource. This ambitious goal will not be easily achieved, but Reza and Hamong see it as a moral obligation and the most important front in their fight to challenge corporate power and protect the public good.

By Eve Warburton. Eve is in the final stages of her M.A. Human Rights Studies, writing her thesis on human rights and the water justice movement in Indonesia. Eve is an editor for RightsViews, and also works part time for Columbia’s Earth Institute and the Institute for Social and Economic Research and Policy.