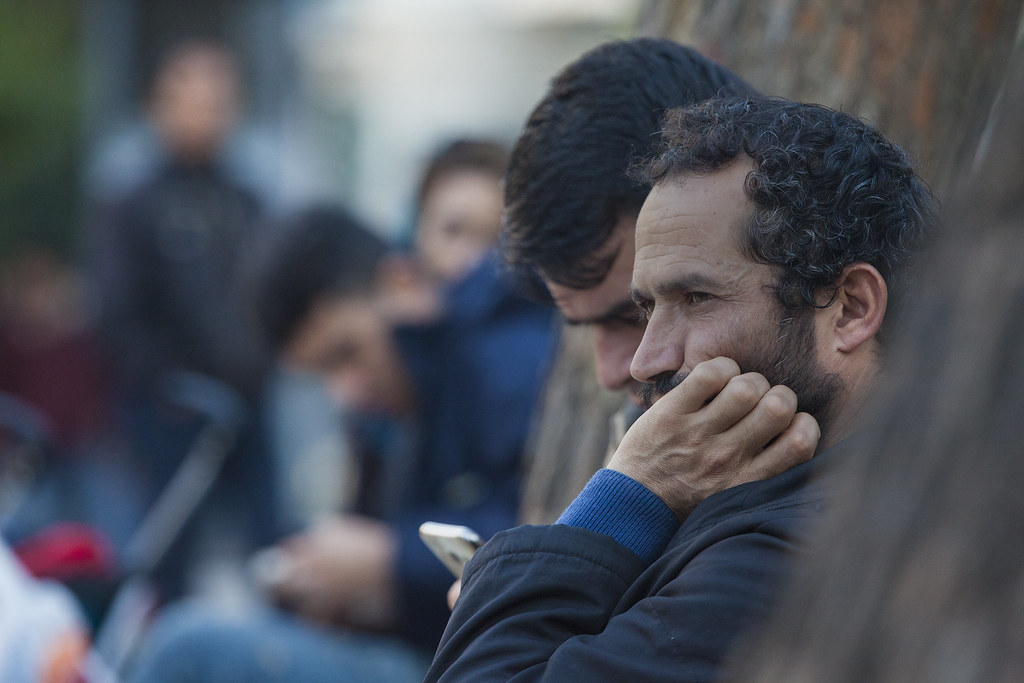 Guest Contributor Ali Cain is an M.A. Candidate in the European History, Politics and Society Program at Columbia University. She is additionally the Program Coordinator for the Cardozo Law Institute in Holocaust and Human Rights (CLIHHR). Her research interests include populism, refugee rights and transatlantic relations.

Turkish President Recep Tayyip Erdogan has used over 4 million refugees in Turkey as political blackmail against the European Union (EU). Leveraging the 2016 EU-Turkey Migration Deal, Erdogan has consistently threatened to “open the floodgates” and allow refugees to cross into neighboring Greece whenever his demands are not  met. Previous demands have included quicker EU accession talks, European support for a refugee safe zone in northern Syria, and more funding to support refugees.

In late February 2020, Russian and Syrian government forces attacked the Syrian province of Idlib, forcing thousands to flee into northwest Turkey. In response, Erdogan finally fulfilled his threats and allowed thousands of refugees to leave, even providing buses for transportation to the Greek border. Upon arrival, refugees were greeted with tear gas, barricades and shouts to go back home. Videos later surfaced of the Greek Coast Guard circling refugee boats in what looked like an effort to both deter them from landing but also capsize them. The New York Times further reported that the Greek Coast Guard beat migrants with sticks and shot at them, resulting in the death of a Syrian refugee. Worryingly, the EU’s willpower and ability to address this crisis and reinvigorate the discussion over modifications to Europe’s Common European Asylum System (CEAS) is substantially reduced as it now faces the surmounting challenge of tackling COVID-19.

In discussing this new migration crisis, the EU has taken a defensive position in calling for the protection of Europe’s borders. Instead of using this opportunity to reinitiate a conversation on a “fresh start” for Europe’s asylum system as she advocated for during her consideration for EU Commission President, Ursula von der Leyen instead commended Greece for being Europe’s shield and offered its government €700 million ($769,968,000) of aid, €350 million ($384,984,000) of which would go to strengthening Greece’s border control. While offering support to Greece, Ms. von der Leyen and European Council President Charles Michel also visited Turkey to discuss renegotiating the 2016 EU-Turkey Migration Deal. At the height of the 2015 refugee crisis, the EU and Turkey agreed that each individual who arrived at the Greek border by boat and/or without official permission would be returned to Turkey, as it is considered a safe country for “irregular” migrants. In exchange for every individual sent to Turkey, a Syrian would be accepted into an EU member state. The EU initially agreed to provide €3 billion ($3,299,860,000) of assistance to the Turkish government to fund on-the-ground projects for refugees.

Since the agreement was finalized, Erdogan has demanded more funding and the EU has obliged, increasing its contributions to €6 billion ($6,599,720,000) and extending its support of projects until 2025. Other parts of the deal have faltered; the EU agreed to visa liberalization for Turkish citizens and a reinvigoration of accession discussions regarding Turkey joining the EU. However, there has been little movement on both of these commitments due to Erdogan’s growing usurpation of power which has led to an increased crackdown on opposition, heightened violence towards the Kurdish community, and greater involvement in the Syrian conflict. The EU has additionally failed to accept its agreed exchange of Syrian refugees. Only 27,000 have been resettled since 2016.

Many European governments would see the original agreement as a logistical success given that its goal was to deter refugees from coming to Europe. Yet, although migration from Turkey has fallen by 97%, a crisis still remains. Turkey is growing increasingly unsafe for refugees. The renegotiation of this deal would allow Erdogan to continue fostering an unsafe environment, pressure Europe into more funding, infringe on refugee’s human rights and further challenge Europe’s human rights commitments.

First and foremost, Turkey does not meet and will not meet the EU’s standards for accession. Since a 2016 coup attempt, Erdogan has made Turkey, which was once applauded as a successful Muslim democracy, into an increasingly authoritarian state. Following the coup, he fired thousands of government workers, educators, and military members and arrested many of them for “anti-state” crimes. He then issued a referendum in 2017, allowing him to consolidate executive power by controlling elections, intervening in the judiciary, and appointing ministers directly. This power grab led to international outcry, including from the EU who referred to the constitutional changes as a “big setback for democracy.”

Turkey’s increasingly authoritarian state is best exemplified in its status as the biggest jailer of journalists by the Committee to Protect Journalists and its ranking as “not free” by Freedom House. Erdogan’s actions clearly violate Europe’s commitment to human rights and its principles for the accession process; any previous reforms that satisfied the EU’s conditions for membership should now be considered completely null and void. Therefore, a renegotiation of this deal that commits to reassessing Turkish accession is not only woefully misguided but jeopardizes the human rights standards and legal commitments the EU is obligated to uphold.

Second, refugees in Turkey are facing increasingly hostile conditions due to rising unemployment and growing xenophobia that conflict with Turkey’s status as a safe country. There are over 3.6 million Syrian refugees in Turkey. 64% of those living in Turkish cities are living at or below the poverty line because it is extremely challenging for refugees to obtain working permits. Unemployment in Turkey is now at 13%.

This had contributed to an increase in xenophobic sentiment among Turkish society. It has been reported that 60-80% of Turks  want Syrian refugees out. Violence has begun to occur, with Syrian owned stores being attacked in July 2019 after a false rumor about a Syrian sexually assaulting a minor was circulated. The hashtag #ÜlkemdeSuriyeliIstemiyorum (I don’t want Syrians in my country) has become prominent throughout Turkish social media.

This public pressure, as well as the clear strain on Turkey’s social services, has led to increased deportations. There is a lack of accountability in ensuring asylum procedures are lawfully carried out. Turkey is a signatory to the 1951 Refugee Convention and its 1967 Protocol, and is therefore required to not only protect refugees but also uphold the international legal principle of non-refoulment which mandates that refugees cannot be sent back to countries where they will face human rights violations.  A 2019 investigation by Refugees International found that Turkish authorities were increasingly stopping Syrian refugees to check their identification papers and accelerating deportations to Syria, many of which were forced returns. Furthermore, Erdogan has sought to resettle Syrian refugees in a “safe zone” controlled by American backed Kurdish forces. Many have criticized this plan, including the Europeans. A resettlement in northern Syria, where violence continues, not only threatens refugees but also enflames Turkey’s tensions with the Kurds. Although this plan is at a stand-still, Erdogan continues to seek out and demand support, using his release of refugees into Europe as political bait.

Finally, the 2016 deal has allowed for conditions to also worsen for refugees in Greece. Those who arrived in Greece following the agreement were prohibited from crossing into mainland Europe, resulting in refugees having to seek asylum in Greece or face immediate deportation to Turkey. Because the deal mandates that all of those who fail to qualify for asylum be deported, Greek authorities must detain everyone who is considered to have entered Greece irregularly, which has led to overcrowding in detention centers. An estimated 40,000 people live in facilities built for 6,000. Conditions in these camps are dire; Amnesty International reported those detained on the Greek islands of Lesbos and Chios had “no access to legal aid, limited access to services and support, and hardly any information about their status or possible fate.” The Greek islands have thus become a prison of both limbo and inhumane living conditions for asylum seekers. According to the New York Times, Greece has detained migrants at secret detention centers and is sending them to Turkey without any due process on their asylum claims. Although Greece does have the right to detain those who enter its borders, it is nevertheless obliged by international law to give each asylum applicant a fair and timely consideration.

Additionally, the European Commission announced it would offer €2,000 ($2,199) to those living in Greek detention camps who voluntarily agreed to return home. Although the Commission stated that the intended recipients of this funding are economic migrants and not refugees, poor camp conditions and severely delayed asylum decisions could put pressure on refugees to return to their home countries. It is also questionable how many economic migrants are in Greece, considering that most individuals are from war-torn Syria, Afghanistan and Iraq. Instead of trying to buy out migrants in returning home to potentially unstable states, the Commission could instead use its funding to better improve the living conditions in detention facilities and support Greece’s government in processing its asylum applications more efficiently.

Turkey’s concerns about the refugee crisis  are not totally unfounded as it is the largest host country in the world. Considerable strain has been placed on its social services and its population. Hosting four million refugees in a country that is struggling economically is not an easy task. However, growing anti-refugee sentiment and the subsequent harms to the refugee population in the country is one of many clear signals that the EU should not renegotiate its 2016 deal with Turkey. Rather, steps ought to be taken to address the structural causes of such a high number of refugees forced to leave their homes. The EU should not allow itself to continue to be in Erdogan’s chokehold; by continuing its “payer not player” status in using funds as a conflict resolution mechanism instead of diplomacy and mediation, the EU is helping to prolong violence in Syria, Iraq and Afghanistan. Although the world is currently occupied with COVID-19, and rightfully so, the EU will have to return to its discussion on migration reform eventually.  When it does, it has moral and legal obligations to protect refugees and to figure out a solution that is dependent on European states and international law, not Erdogan’s will.