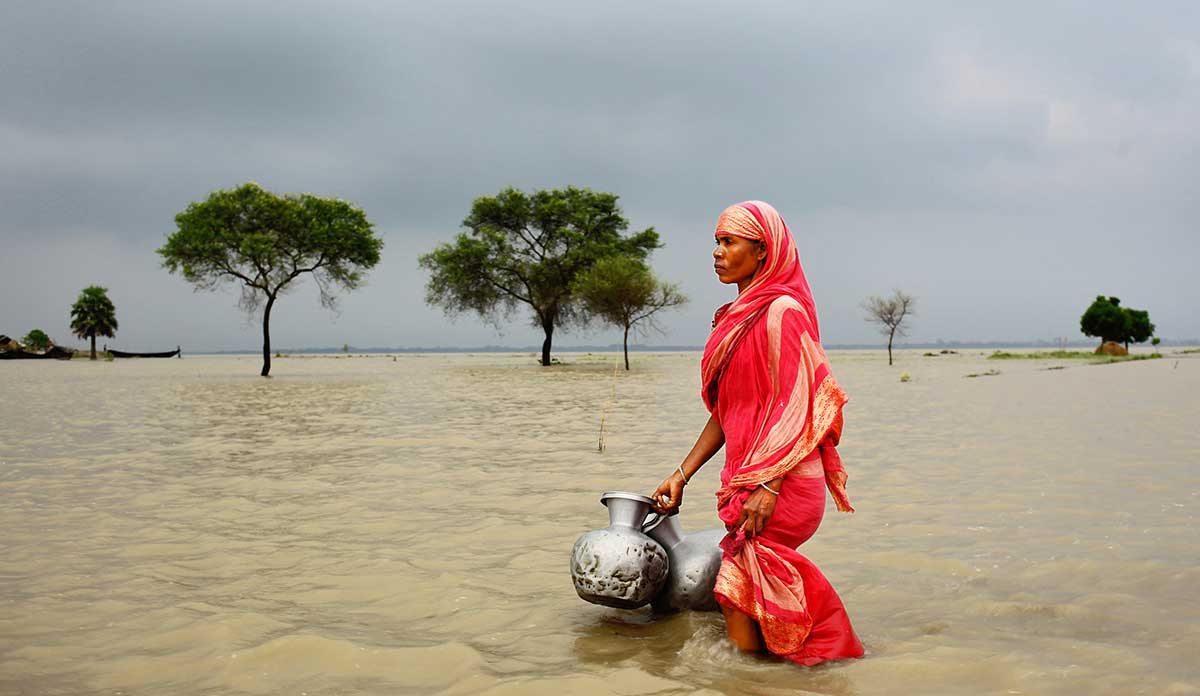 When the Wave Comes: Climate Change, Immigration, and International Law

By Genevieve Zingg, editor of RightsViews and an M.A. student in Human Rights Studies at Columbia University

“Climate refugees”— broadly defined as people displaced across borders because of the sudden or long-term effects of climate change—are not a future phenomenon. Climate migration is already happening in a growing number of countries around the world: the Internal Displacement Monitoring Centre estimates that the impact and threat of climate-related hazards displaced an average of 21.5 million people annually between 2008 and 2015. In 2016 alone, climate and weather-related disasters displaced some 23.5 million people.

Floods, droughts and storms are the primary causes of climate-related displacement. In the coming decades, severe droughts are expected to plague northern Mexico, with some studies predicting up to 6.7 million people migrating to the U.S. by 2080 as a result. High-intensity storms like cyclones have already displaced thousands from Tuvalu in the South Pacific and Puerto Rico in the Caribbean, and rising sea levels are projected to put Kiribati, a tiny Pacific island with the smallest carbon footprint in the world, completely under water. A woman and child walk through Chennai, India after severe floods in December 2015. // Anindito Mukherjee // Reuters

Projections of future migration patterns expect at least 200 million citizens to flee their homelands by 2050. Further, according to a recent paper investigating the correlation between migration and significant fluctuations in temperature, asylum applications will increase by almost 200 percent by the end of the century if greenhouse gas emissions continue unabated.

“Climate Refugees” Do Not Exist — Technically

The problem, however, is this: under international law, there is technically no such thing as a “climate refugee.” The 1951 Refugee Convention and the Additional Protocol adopted in 1967 define the term “refugee” as “any person outside their country of origin and unable or unwilling to return there or to avail themselves of its protection, on account of a well-founded fear of persecution for reasons of race, religion, nationality, membership of a particular group, or political opinion.” In other words, under the current framework, the millions of people soon to be displaced due to climate-related impacts will have no legal grounds to seek international protection.

“It’s interesting how often the impact of climate change is illustrated by talking about the problems polar bears will face, rather than the much greater number of poor people who will die unless significant investments are made to help them.”

According to Pierre Bertrand, former Director of UNHCR in New York and Lead Rapporteur to the UN Global Migration Group, the “climate refugees” phenomenon is increasingly visible in the public discourse, despite its lack of legal status. “People are on the move for many compelling reasons. But what is more compelling than people whose country disappears?” he said.

The 2016 Paris Agreement, a landmark international climate agreement signed by 195 countries, failed to address climate-related disasters as a basis for asylum despite significant lobbying by international NGOs.

Bertrand says this was due to fears surrounding amending or expanding the definition set out by the 1951 Convention. “The thinking in UNHCR is that if we put this up for revision and discussion to adapt the Convention to contemporary forms of forced movement, it will risk downgrading the standards of the Convention itself,” he said. Citing the current political mood towards migration, Bertrand highlighted the risk that opening the Convention to review may carry.

“Countries in the North and in Europe want to review the Convention to bring some limits to it, rather than improvements,” he said.

In December 2015, for example, Danish Prime Minister Lars Løkke Rasmussen suggested that the 1951 Convention might need to be renegotiated in light of the European migration crisis.

“In the discussion of migration, there is a divide between countries who export migrants, and the countries who receive them. Some are interested in how their nationals are treated in countries of transit and destination; they want the best treatment possible for their nationals,” Bertrand told RightsViews via telephone. “But then you have the elephant in the room: the countries in the north arguing that they have the competence to decide who to admit, which is a sacred principle. It remains the right of states to decide, based on the classic concept of sovereignty enshrined in the Charter of the United Nations.”

He points to the International Convention on the Protection of the Rights of All Migrant Workers, developed in 1990 and entered into force in 2003, to illustrate his point. “This Convention has 51 ratifications, all from the South. No developed country has ever ratified it,” he said.

Despite the predictions of climate-fueled migration on the horizon, American and European political leaders are currently building walls and slashing annual refugee quotas. Among the most visibly anti-migrant is the Trump administration, which in only one year cut its federal refugee program by more than half, cracked down on undocumented immigration, deployed the National Guard to the Mexican border while the president’s controversial wall remains stalled, and proposed slashing legal immigration numbers by half over the next ten years. Anti-migrant policies are hardly unique to Donald Trump and strongly correlated with the rise of far-right populist parties across the European Union. The number of border walls around the world has jumped from 15 in 1989 to 70 today. Flooding in the Walia neighborhood of N’Djamena in Chad, October 2012, caused by the rise of the Chari and Logone rivers. // Pierre Peron // OCHA

Susan Martin, founder of the Institute for the Study of International Migration at the Georgetown School of Foreign Service and previous executive director of the U.S. Commission on Immigration Reform, notes that migration is a natural and effective adaptation process for environmental changes. “There needs to be preemptive action to provide legal avenues to facilitate those movements,” she said.

Some countries have already begun to adapt their immigration policies in preparation for climate migration, particularly those who have already experienced it. After a devastating earthquake in 2010 killed 300,000 Haitians and displaced more than one million, Brazil developed a policy issuing humanitarian visas and work authorizations for those arriving from the stricken nation. Argentina and Peru have implemented similar policies accounting for people affected by environmental disasters, and New Zealand recently became the first country in the world to introduce a climate refugee scheme by creating a special “refugee visa” for Pacific Islanders forced to migrate because of rising sea levels. Humanitarian visas, work authorizations, and other legal pathways are innovative policy options that states can institute even without an overarching international legal framework.

Other states, however, have responded to high rates of current asylum applications by closing existing legal avenues for climate migrants. In response to the European “refugee crisis,” for example, both Finland and Sweden— previously hailed as the only two countries in the world recognizing environmental disaster as a basis for protection— recently removed the clause from their respective immigration and asylum legislation.

Genevieve Zingg is currently pursuing her Master’s degree in Human Rights Studies at Columbia University, focusing on human rights in the context of armed conflict, counterterrorism and national security. She is interested in refugees and migration, foreign policy and international politics, international criminal and humanitarian law, and intersectional issues of race and gender. She holds a B.A. (Hons.) from the University of Toronto and has professional experience working in Geneva, Athens, Paris, Brussels and Toronto. Connect with her on Twitter @GenZingg. She is editor of RightsViews.