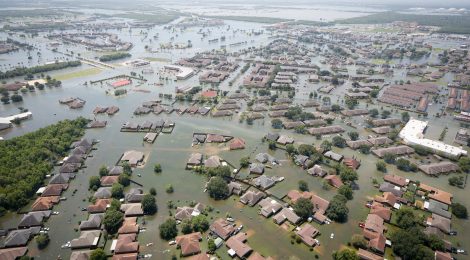 Price Gouging in the Wake of Natural Disaster: A Legal Ambiguity

Emily Naranjo / November 19, 2017 / Comments Off on Price Gouging in the Wake of Natural Disaster: A Legal Ambiguity / Online, Uncategorized

In August and September of 2017, both Florida and Texas were devastated by two catastrophic hurricanes – Irma and Harvey.  Over the course of several days, numerous families were suddenly burdened with floods, decimated infrastructure, and loss in power. In the days leading up to the disasters, frenzy surrounded the purchasing of water, nonperishable food, and gasoline. Naturally, with such a high demand in supply, prices of various necessities rose. In some instances the value of the supply made prices exorbitantly higher than what they were prior to the hurricanes. It is reported that in Florida, a store valued a six-pack of water at $72 and Delta marked its plane tickets up to $3200 for flights out of the state.[1] Similarly in Texas, a gas station sold fuel for $20 per gallon.[2] These instances exemplify the viciousness of price gouging. Despite these issues, it can be argued that laws concerning price gouging are ambiguous resulting in a lack of clarification surrounding the legality of price fluctuation.[3]

During both Hurricane Irma and Hurricane Harvey, demand for gasoline skyrocketed due to fuel necessity during power outages. As a result, gas prices also surged. It is natural for prices to fluctuate within a reasonable margin when demand is high. This idea was evident during Hurricane Katrina when Marathon Petroleum Company increased gas prices by twenty-five or fifty cents per gallon. As a result of the increase, the attorney general of Kentucky filed an action against the fuel company on account of price gouging. In the case of Marathon Petroleum Company LLC v. Gregory D. Stumbo, the increase in price of gasoline is due to greater demand in gas. The Kentucky Act outlines the ability for additional costs in the case of service, whether that is labor or material.[4] This is applicable to the higher demand for gasoline in Kentucky following Hurricane Katrina, as supplying such high quantities of gasoline is more expensive. Due to the concept of increasing marginal cost, when demand for gas increases, no matter the situation, suppliers must charge a higher price to meet the cost of supplying a greater quantity.

According to the Supreme Court case United States v. Commodities Trading Corp., it is constitutional for each state to individually declare the legality of price gouging.[5] Florida’s Rental or Sale of Essential Commodities During a Declared State of Emergency law states it is illegal if “the amount charged grossly exceeds the average price at which the same or similar commodity was readily obtainable in the trade area during the thirty days immediately prior to a declaration of a state of emergency”.[6] Texas’ Deceptive Trade Statute mirrors Florida’s anti-price gouging law in that it bans the selling of necessary products at extremely high prices during disaster periods. Interestingly, Texas acknowledges the fluctuation of price of fuel during times of disaster. According to the statute, the price of the pump constantly varies no matter the condition of the state. Oil refineries that can be harmed during disaster thus would inevitably increase gasoline prices.[7]

After the disaster of Hurricane Katrina in 2005, the attorney general of Kentucky filed an action against Marathon Petroleum Company, LLC, in the Franklin Circuit Court on the grounds that the fuel company violated the Kentucky Act.[8] This act is very similar to those in Florida and Texas. With the declaration of a state of emergency, certain items such as water and medical supplies cannot be sold at exorbitantly high prices compared to those that existed before the emergency was declared. In the case of Marathon Petroleum Company LLC v. Gregory D. Stumbo, prices per gallon of gasoline rose either twenty-five or fifty cents depending on the station. As a result, attorney general Gregory Stumbo requested a reimbursement of $89 million from Marathon Petroleum Company.[9]

In the ongoing suit, Marathon Petroleum Company LLC v. Gregory D. Stumbo, Marathon filed a federal action against the attorney general stating that the Kentucky Act violates the state and federal constitution. According to Marathon the constitutional violations existed in the 14th Amendment, or the Due Process Clause, through the use of arbitrary power. The vagueness of the Kentucky Act allowed for Marathon to unknowingly increase prices illegally. Even so, the court affirmed the constitutionality of the Kentucky Act citing the incomplete nature of Marathon’s argument.[10] Marathon also stated that the Kentucky act violated the Dormant Commerce Clause in that it is an unnecessary burden on commerce. Yet again, the court disagreed with this motion as the purpose of the Kentucky Act is to protect the individuals of the state from cost manipulation.[11] The ambiguity of the definition of price gouging under the Kentucky Act resulted in a standstill between the attorney general and Marathon. Rather than allowing for restitution, the lack of clarity of what price gouging is withholds a conclusion for the case.

The lack of clarity that exists in the price gouging laws of Florida, Texas, and Kentucky results in a complicated understanding of what an excessive increase in price is. This allows for companies to elude punishment for taking advantage of citizens during a vulnerable period of time. In the suit Marathon Petroleum Company LLC v. Gregory D. Stumbo, the case remains unresolved as the petroleum company argues that the Kentucky Act is a violation of the 14th amendment. However, according to Stumbo, the increase of twenty-five to fifty cents per gallon is considered an unlawful spike in price. In the case of John J. Hoffman, Acting Attorney General of the State of New Jersey and, Eric T. Kanefsky, Director of the New Jersey Division of Consumer Affairs v. Vinny Fuel Corporation, price gouging was already defined as a 10% increase in price during a state of emergency. This allowed for a simple process of conviction and reimbursement.

To limit the increase of cost and define price gouging it would be beneficial if numerical limits were reasonably placed on various categories of goods such as gas and food. Exorbitantly high prices hurt a population, particularly during times of disaster. It would be beneficial for all parties involved if laws about price gouging were more explicit so that businesses know where the line is drawn and the government can reasonably file an action when that line is crossed.

[3] Anita Ramasastry, Assessing Anti-Price-Gouging Statutes In The Wake of Hurricane Katrina: Why They’re Necessary in Emergencies, But Need to Be Rewritten, (2005)

← A Cruel and Unusual Burden: The Case for the Unconstitutionality of Solitary Confinement
Our New Website, www.culawreview.org, Has Launched! →