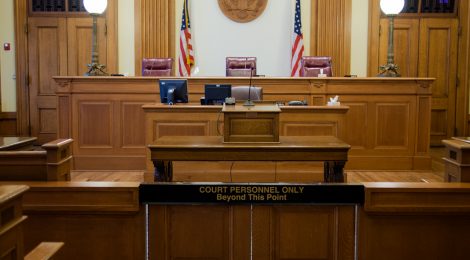 In June of 2015, 22-year old Kalief Browder tied a cord to his neck, and pushed himself out of a hole in his wall to his death. When he was 16, Kalief had been sentenced to prison in Rikers Island for stealing a backpack–a crime he did not commit–and was charged with a “violent felony” [i]. Despite a lack of evidence, Kalief was shipped to Rikers on a bus and endured torture, starvation, and abuse at the hands of guards and inmates. He did not receive trial until three years later.

The Sixth Amendment of the U.S. Constitution states: “In all criminal prosecutions, the accused shall enjoy the right to a speedy and public trial” [ii]. Forty-four states have enacted their own version of a speedy trial statute or a court rule in addition to this constitutional right; New York is one of them. In 1972, New York passed its own version of the speedy trial statute: CPL (Criminal Procedural Law) §30.30, also known as the “Ready Rule,” which requires the prosecution to be “ready for trial” within an applicable time period.

The shocking case of Kalief Browder ushered in a sweeping effort to reform CPL §30.30. How many defendants like Kalief had spent months or even years waiting in maximum-security jails for trial only to be proven innocent? Yet, as politicians and legislators drafted bills and called for administrative overhaul, Kalief’s legacy dims while the structural, discriminatory implications of New York’s “speedy trial” statute live on.

Since CPL §30.30 was established, prosecutions have been quick to exploit the statute so that felony defendants often have to wait up to three years in jail for a day in court. As the Ready Rule merely requires the prosecution to be “ready for trial”, prosecutors will state that they are “ready” within the timeframe, a condition that does not actually necessitate going to trial; prosecutions can thus delay trial without ever actually violating CPL §30.30. Moreover, the failure to clearly define what constitutes “trial readiness”, as well as how the “speedy trial” time is determined from the time of the prosecution’s declaration of trial readiness rather than from the emergence of the defendant’s case, allow for further manipulation and delay. Thomas O’Brien of the New York Law Journal suggests, “the dismal reality is that, under the “ready rule” of CPL §30.30, delays in the prosecution of criminal cases are far worse than was the situation when it was enacted in 1972” [iii].

On top of its flawed provisions, the Ready Rule is also often employed selectively and is discriminatory against certain neighborhoods and minorities in New York City. According to a lawsuit filed by a group of Bronx defense attorneys in 2016, 2,378 misdemeanor cases had been pending for more than a year and 538 for more than two years in the Bronx. Defendants must wait an average of 642 days for a non-jury trial and 827 days for a jury trial. Each week, 800 new cases come into court and less than two, on average, get trial [iv].

Comparatively, defendants facing trial in Manhattan faced a relatively short wait. It is no coincidence that the Bronx is demographically more diverse, with 43.7% of its 1.5 million population being African-American and 56% Hispanic or Latino [v]. With NYPD’s history of racist policing, including the stringent enforcement of “Broken Windows” policing in the 80s and continued stop and frisk policies, it comes as no surprise that the constitutional guarantee of a “fair and speedy trial” is being denied to African-American and Hispanic communities. In fact, it is just another example of how systemic racism continues to be perpetrated by mass policing and incarceration: black and brown men and women cannot succeed when they are stuck in purgatory for years awaiting trial.

Despite the Ready Rule’s glaring issues and due to the nature of partisan and state politics, both legislators and the New York State government are slow to make the necessary reforms to prevent another victim like Kalief from slipping into the cracks of a flawed justice system.

Former State Senator Daniel Squadron first proposed an amendment to CPL §30.30 in the form of Kalief’s Law, which would reduce delays in prosecutorial readiness by requiring the prosecution to provide evidence that they are ready when declaring trial readiness, as well as requiring the court to approve exclusions when the prosecution states that they are “unready” after previously stating otherwise [vi]. Since then, the bill has been continually passed between House committees for overview and, though passed in the Democratic-majority Assembly (the equivalent of a House of Representatives for New York State), it has not passed in the Republican-majority Senate.

Chief Judge of the New York Court of Appeals Jonathan Lippmann also announced administrative reforms intended to reduce the number of pretrial detainees after Kalief was released, but failed to gain support in the state assembly for two years [vii]. In addition, while New York has spearheaded a supervised release program in which a small number of approved defendants are released pretrial, it has simultaneously enforced strict eligibility requirements based on the nature of the crimes charged, the risk of failure, previous criminal history, failure to appear, and ties to the local community [vii].

Not only do these requirements apply to a very selective group–Kalief Browder himself would not have qualified–but they also discriminate against the very communities such programs were designed to serve. African-American and Hispanic-American communities like the Bronx have much higher instances of existing previous criminal histories amongst its population due to systemic racism, discrimination, and police brutality. How can we speak of reforming the speedy trial statute when teenagers like Kalief are being charged with felonies they did not commit? In order to tackle such issues, we must see the Kalief’s tragic case as an important manifestation of the institutional racism that exists within New York’s criminal justice system. Kalief was black, and because he was black, the criminal justice system failed him.