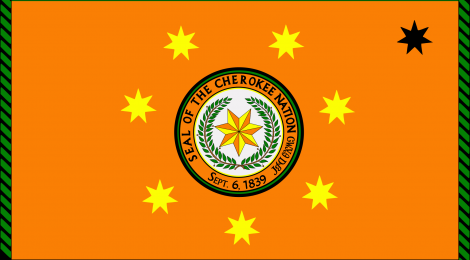 Since the European discovery of the Americas, American Indians have faced harsh obstacles to their rightful land ownership, prosperity, and health. Today, it is no different. As the U.S. government has relocated entire tribal nations, American Indians continue to face issues of unclear land ownership. American Indians also have one of the highest poverty rates in the United States.[1]Approximately one-third of those who list American Indian or Native Alaskan as their only race are impoverished.[2] In addition to impoverishment and issues of land ownership, the current American opioid crisis has disproportionately affected the wellbeing of American Indians. American Indians have the highest rate of drug-related deaths in the nation. Oklahoma, which is heavily populated by American Indians, leads the nation in opioid addiction.[3] Of the pills distributed in Oklahoma, one-third go to the fourteen counties that comprise the Cherokee Nation, the main governing authority of the Cherokee tribe. Due to the growing opioid epidemic in Cherokee land, the tribe’s government struggles to provide adequate funding for social programs to address the rising rates of poverty and crime.[4]

The answer came quickly. By June, the corporations cited in the suit went to the federal circuit with a petition to transfer the suit out of tribal court. Each company claimed that the Cherokee Nation has no jurisdiction over them since they are not tribal members or tribal corporations, which allegedly frees them from being held accountable to Cherokee laws.[9] Attorney General Hembree stated that this collective claim was “an attack on the very sovereignty of our nation.”[10]

The power of tribal courts has slowly eroded away since their creation, particularly as two Supreme Court cases in the early 1980s left modern tribal governments virtually powerless to raise cases against any non-Indians.[11] The more significant of these was Montana v. United States (1981), in which the Court ruled that the sovereign powers of tribal nations do not extend to the actions of non-Indians, even if the crime violates tribal law on tribal land. Montana v.  United States allows only two exceptions for non-Indians being tried in tribal court: if the case arises due to “consensual relationships with the tribe” or if the conduct of the non-Indians “threatens or has some direct effect on the political integrity, the economic security, or the health or welfare of the tribe.”[12] The other case, Oliphant v. Suquamish Indian Tribe (1978), is even blunter in its ruling. It claims that, since Indian nations did not have a recognizable judicial system upon discovery, they cannot have jurisdiction unless the federal government grants it to them. The ruling states that tribal governments must “submit to the sovereignty of the United States” and “yield the power to try non-Indians except in a manner acceptable to Congress.”[13] Therefore, unless a tribe can prove that an individual or group’s actions has a direct effect on the ability of a tribe to exercise sovereignty, it is near-impossible for a tribal nation to raise a case against a non-Indian in its own court system.

Cases such as the Cherokee Nation’s opioid suit reveal the dark truth behind the legal powers of tribal governments. Since the ownership of American Indian land is in question, legal autonomy is crucial for tribal governments to exercise their rights as free, independent nations. If the Cherokee Nation is stripped of its legal powers to hold individuals accountable to violations of the law, how can it claim legitimate sovereignty? If the law prevents tribes from protecting their own tribal members from the conduct of non-members, can they exercise objective sovereignty at all? It is ironic that it was a case against the Cherokee Nation, The Cherokee Nation v. State of Georgia, which first classified tribes as “domestic dependent nations” deferent to United States law.[14] Despite filing a case in a genuine attempt to provide for the welfare of its citizens, the Cherokee Nation may be powerless to hold drug providers accountable for any wrongdoing they have done.

However, there have been some advances in the realm of tribal jurisdiction. In June 2016, the Supreme Court affirmed that the Mississippi Band of Choctaw Indians could sue Dollar General Corporation in a tribal court for negligence in hiring a manager accused of sexually assaulting a Choctaw boy, as the Mississippi Choctaw had a direct contract  with Dollar General (one of the exceptions listed in Montana v. United States).[15] The Pawnee Nation of Oklahoma was also able to file a suit in tribal court during March of this year against several oil companies, alleging that their fracking operations led to a 5.8-magnitude earthquake that destroyed local property and historic tribal buildings.[16]

Nonetheless, despite these developments, the future of tribal courts is still very much at risk. The decision in Dollar General Corporation v. the Mississippi Band of Choctaw Indians was rendered with an incomplete jury due to the death of Justice Antonin Scalia.[17] Now that the bench is full, if the petition to deny jurisdiction to the Cherokee Nation were to make it to the Supreme Court, the decision would become the law of the land. The ultimate test rests on the shoulders of The Cherokee Nation v. McKesson Corp et. al to affirm the true powers of tribal courts in the modern age.