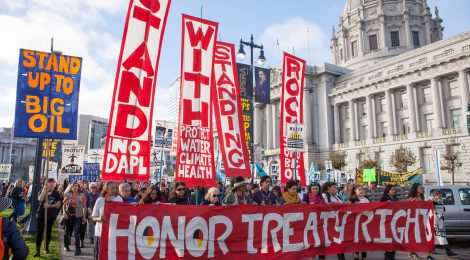 The Precedent Behind DAPL: A Look at Pending Litigation

When attempting to justify his Executive Order to review and expedite construction for the Dakota Access and Keystone XL pipelines, Donald Trump stated, “As you know I approved two pipelines that were stuck in limbo forever. I don’t even think it was controversial. You know, I approved them and I haven’t even heard one call from anybody saying, ‘Oh, that was a terrible thing you did.’”[1] However, Trump’s attempt to pass off his pipeline approval as insignificant, free of controversy, and free of any blame attaching to himself, proves misleading when analyzing its legal framework and the response of the American public.

The Dakota Access pipeline is a highly-contested issue, as demonstrated by a multitude of protests that began a whole “movement, which started in early 2016, had small roots but grew into the thousands, drawing support from Native Americans from across the country, as well as activists who joined in solidarity against the proposed route of the 1,172-mile Dakota Access Pipeline just north of the reservation.”[2] This executive order proves highly problematic and egregious because it breaches various environmental acts, such as the Clean Water Act; it infringes upon the preservation of cultural artifacts of the Sioux tribe, as guaranteed by the National Historic Preservation Act; and finally, it disobeys the Treaty of Fort Laramie, in a way that epitomizes a regression to times of colonial strife and racism, a theme deeply ingrained in America’s cultural heritage.

In July of 2016, Earth Justice, a nonprofit organization supporting the Sioux natives, filed a legal complaint that detailed the illegality of this pipeline. According to the original text, “First, the Tribe brings an as-applied challenge to Nationwide Permit 12 (“NWP 12”), issued by the Corps in 2012 pursuant to the federal Clean Water Act (“CWA”) and Rivers and Harbors Act (“RHA”).”[3] They divided the complaint into two distinct parts; the first part is an “as-applied” challenge, which invokes that as applied to the Sioux natives, the Dakota Access Pipeline is illegal. The as-applied challenge refers to the Clean Water Act as well as the Rivers and Harbors Act because “DAPL crosses hundreds if not thousands of federally regulated rivers, streams, and wetlands along its route. The discharge of any fill material in such waters is prohibited absent authorization from the Corps.” Clearly, a pipeline that invades numerous important waterways, like the Dakota Access Pipeline, is in violation of the Clean Water Act. The second argument of the complaint deals with the inherent unconstitutionality of this pipeline, as “the Tribe brings this challenge because these authorizations were made in violation of the CWA and its governing regulations and without compliance with NHPA, and the National Environmental Policy Act.”[4]

Not only would this pipeline have a distressing impact on the Sioux tribe, but it would also violate specific environmental acts, including the National Historic Preservation Act of 1966. In 1992, The National Historic Preservation Act was amended to preserve items of religious and cultural significance. As the Advisory Council on Historic Preservation explains, “Section 101(d)(6)(B)…. requires Federal agencies, in carrying out their Section 106 responsibilities, to consult with any Indian tribe¹ that attaches religious and cultural significance to historic properties that may be affected by an undertaking.”[5] Robinson Meyer of The Atlantic elaborates: “the pipeline will pass through and likely destroy Native burial sites and sacred places…For instance, they described a large stone feature that depicted the constellation Iyokaptan Tanka (the Big Dipper)—a sign that a major leader, likely a highly respected Chief, was buried nearby.”[6] Therefore, before any project can be constructed on native land, the constituents must consult the natives to determine the negative implications of the project on the preservation of their religious and cultural artifacts. However, this mandated discussion never occurred. The burial site of a highly respected Chief carries “religious and cultural significance,” which, in turn, underscores that the construction of this pipeline is in violation of the National Historic Preservation Act.

Further controversy arose due to the Treaty of Fort Laramie, signed in 1851 with the Sioux tribe, that protects the health of their people and their natural resources. The third article of this treaty facilitates the protection of the Sioux from plundering: “The United States bind themselves to protect the aforesaid Indian nations against the commission of all depredations by the people of the said United States.”[7] This article inherently implies that the destruction of the tribe’s resources is in violation of the treaty.

In addition to detrimental environmental, legal, and political ramifications, the construction of this pipeline limits the Sioux tribe’s accessibility to water—a situation that the tribe is acutely aware of. One man in the Sioux tribe explained the tribe’s worried sentiments when stating that: “You can live without money. You can live without oil. But you can’t live without water”.[8] The U.S. Fish and Wildlife Service completed a haphazard environmental assessment that completely disregarded the enormous risk that an oil spill would pose: “In conclusion, wetland and waterbody construction crossing methods, implementation of erosion control devices, and PHMSA requirements would minimize potential impacts to water quality from construction and operation of the Project.”[9] The report’s phrasing underscores its apathetic response to violating equal access to clean water. The word “minimize” proves ambiguous for it implies that there will be damage, but that it ought to be kept to as low a level as possible. However, the Treaty of Fort Laramie clearly established the complete protection of the Sioux land. Therefore, even a “minimal” amount of damage to the water supply violates this law.

As David Archambault II, chairman of the Standing Rock, surmised: “This disregard for tribal diplomatic relations and the potential for national repercussions is utterly alarming.”[10] The Dakota Access Pipeline will run through and pollute protected waterways; it will cause unprecedented and extreme environmental damage. Legally, it is not only in violation of just one law but a multitude, including the National Historic Preservation Act (as the destruction of culturally significant artifacts is highly likely, and the tribe itself was never even consulted), the Clean Water Act (since it has the potential to entirely pollute the waterways which the Standing Rock natives depend on for sustenance), and finally, the Treaty of Fort Laramie. The Dakota Access Pipeline is far more than just environmentally or legally problematic. It represents a regression to a time when the fundamental human rights of the Sioux nation were not established—a time when their people as well as their resources were exploited by European colonizers.

[1] Justin Carissimo, “Donald Trump: ‘I haven’t had one call’ Complaining about Dakota Access

[6] Nadine Ajaka et al., “The Law Behind the Dakota Access Pipeline Disaster,” The Atlantic (The

[8] A Special Report on Standing Rock: The Environmental and Social Justice Consequences of

the Dakota Access Pipeline,” A Special Report on Standing Rock: The Environmental

← The Precedent Behind DAPL: Violations of Environmental Law and Lack of Native Agency
The Fundamental Necessity for Free Civil Legal Aid for Fair Trials →