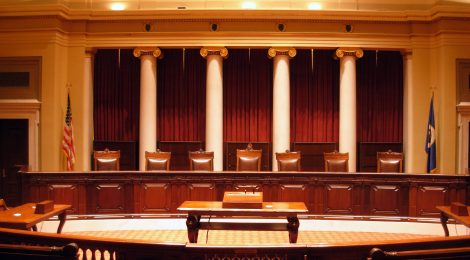 By recognizing that legal representation is fundamental for a fair trial, the U.S. Supreme Court ruled in Gideon v. Wainwright (1963) that the Sixth Amendment assures, “in all criminal prosecutions, the accused shall enjoy the right to have the Assistance of Counsel for his defense.”[i] In the unanimous decision written by Supreme Court Justice Hugo Black, Black wrote, “lawyers in criminal courts are necessities, not luxuries.”[ii]

This 1963 ruling is not the first Supreme Court ruling that addressed the issue of legal aid. Before 1932, interpretation of the Sixth Amendment only forbade states from denying a defense attorney for a defendant, but did not require them to appoint one.[iii] After the 1932 Powell v. Alabama ruling, states were required to automatically provide a free defense attorney in cases that might have resulted in the death penalty.[iv] In the 1963 Gideon v. Wainwright decision, free legal aid was extended to any defendant charged with a felony. [v] This case served as precedent for yet another decision by the U.S. Supreme Court in Argersinger v. Hamlin in 1972, which extended free legal aid to defendants facing charges that could result in imprisonment.[vi] Ultimately, the Supreme Court recognized that the justice system is incredibly complex and can only provide due process if attorneys are appointed to represent defendants.

In each of these cases, the Supreme Court drew on the language of the Sixth and Fourteenth Amendments to determine that any person charged with a criminal offense has the right to free counsel. However, this right does not universally extend to civil cases. Civil trials encompass much more than corporate cases. Civil trials involve eviction decisions, child custody battles, restraining order requests, foreclosures, and more. In such cases, defendants without legal backgrounds are often required to represent themselves in a complex justice system. While the Gideon v. Wainwright and Argersinger v. Hamlin decisions specify that free aid must be given in criminal trials to defendants in order for the restoration of “constitutional principles established to achieve a fair system of justice,”[vii] it can be argued that free aid should also be extended to apply to civil cases for low-income Americans, as representation is essential for fair and just trials.

In the 1981 Lassiter v. Department of Social Services case before the U.S. Supreme Court, a split court decision was issued that indigents only require counsel when there might be a potential loss of physical liberty.[viii] Therefore, there is an assumption against providing free civil aid for indigents involved in civil suits. Advocates for free civil legal aid argue that many civil cases do involve potential loss of physical liberty, and are thus pushing for the adoption of a “Civil Gideon” provision added to the law. On August 7, 2006 the American Bar Association House of Delegates voted unanimously in favor of the adoption of a Civil Gideon provision that urges governments at all levels to provide free legal counsel, “to low income persons in those categories of adversarial proceedings where basic human needs are at stake, such as those involving shelter, sustenance, safety, health or child custody, as determined by each jurisdiction.”[ix] This statement, a clear opposition of the Lassiter v. Department of Social Services decision, indicates that the ABA believes that civil cases often do involve the potential loss of physical liberty and thus should warrant free counsel.

Since the recession in 2008, there has been an increase in the amount of self-represented defendants in civil cases as a result of an increased amount of evictions and foreclosures and an inability to pay for legal representation. According to the American Bar Association (ABA), the number of people who qualify for free civil aid has risen from 27.3 million people in 2007 to 46.7 million people in 2014.[x] This is potentially problematic at a time when, according to the National Center for Access to Justice, there are 64 civil legal attorneys for every 10,000 people living in poverty nationwide.[xi] Studies have shown that people living in poverty are more likely to be involved in the court system, and in ¾ of cases the indigent must represent themselves. [xii] As reported by the Legal Services Corporation, every year more than 80% of indigent people do not obtain legal representation in their civil trials because of a lack of resources at legal aid organizations due to the high number of caseloads. [xiii] While the donation of legal services by private law firms, whether in the form of donations to legal aid organizations or pro-bono representation, is useful, this contribution to the field does not cover the amount of people and cases that need free representation.

The concept of free civil legal representation, while seemingly sparse in the United States, has caught on in countries around the world. The European Court of Human Rights, a subset of the European Union, requires at least 49 countries to provide free lawyers for civil cases. Justification for this provision aligns with the preservation of human rights, essential foundations of democracy, better access to justice, due process, and equal protection for all citizens regardless of socioeconomic status. [xiv] Within the United States, when free legal services are provided, they are shown to be effective. In a case study in Boston, 2/3 of tenants who had counsel avoided eviction and received five times the financial payout than those who did not have access to free civil aid. [xv] Providing civil aid has the potential to protect individuals, families, and communities from job loss, home loss, and thus create better community stability.

As a result of the benefits of legal aid, local governments within the United States are slowly creating laws to provide access to free civil aid for those who need it. According to the National Coalition for a Civil Right to Counsel, across the country in 18 states, two-dozen bills are being considered that would provide free civil aid for low-income defendants.[xvi] In Florida, Pennsylvania, and New Jersey, measures are being considered or have already been adopted that provide free civil aid to people involuntarily committed for substance abuse.[xvii] In Oregon, a measure was passed that provides free attorneys for juveniles facing the possibility of registering as sex offenders.[xviii] And in New York City, free civil aid is currently being expanded into the domain of Housing Court. On February 12, 2017, New York City Mayor Bill de Blasio announced the devotion of $90 million to fund an initiative that will guarantee free civil legal aid for low-income tenants appearing before the Housing Court.[xix] This policy comes at a time when roughly 90% of tenants in New York City appear before the court without representation. With representation, supporters argue that rates of displacement will drop significantly, as evidenced by a 24% drop in evictions since an expansion of New York City tenant legal aid in 2015.

In the 1963 Gideon v. Wainwright decision, Justice Black wrote that in criminal cases representation is, “fundamental and essential to fair trials.”[xx] Yet today, millions of people are forced to represent themselves in complex civil cases that can affect the rest of their lives. The Gideon v. Wainwright decision states, “in our adversary system of criminal justice, any person haled into court, who is too poor to hire a lawyer, can not be assured a fair trial unless counsel is provided for him.” [xxi] While written specifically in relation to the criminal justice system, this statement rings true for low-income people involved in civil cases. In a court system that was designed by lawyers with the expectation that counsel would be present during legal proceedings, there is an immense disadvantage placed on defendants with no legal background, thus opening indigents up to a potential loss of liberty. The 1981 Lassiter v. Department of Social Services Supreme Court decision declared that civil cases do not require free legal aid because of potential loss of physical liberty, yet when unrepresented, indigents have a greater risk of losing their homes, their children, or their personal safety. Therefore, although the Gideon v. Wainwright decision excludes mention of civil cases, perhaps this should be reconsidered. Free legal representation for low-income Americans involved in civil cases may be essential for the existence of a fair court system established to provide just trials and judgments for its citizens.

[ix] Lidman, Raven. “Civil Gideon as a Human Right: Is the U.S. Going to Join Step With the Rest of the Developed World.” Temple Political and Civil Rights Law Review. Summer 2006.

← The Precedent Behind DAPL: A Look at Pending Litigation
International Cybersecurity: A Call for Legislation →