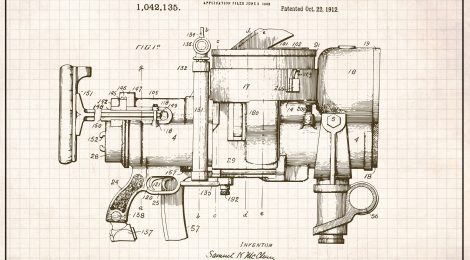 Why America’s New Patent System is Both Destructive and Unconstitutional

Kevin Wei / August 24, 2016 / Comments Off on Why America’s New Patent System is Both Destructive and Unconstitutional / Online, Summer 2016

In 2000, ABB Inc. received patent US 6633900 for a “mobile crew management system for distributing work order assignments to mobile field crew units” that would automate “assigning work orders, communicating work orders to deployed field personnel, and communicating at the request of field personnel, up-to-date data related to an assigned work order.”[1] ABB was a subsidiary of Intellectual Ventures, a well-known non-practicing entity (NPE). As recently as 2016, the firm was suing major corporations such as JCPenney for infringing 6633900 – what was functionally a patent on sending automated instructions to remote workers via the internet.[2] Like most NPEs, also known as “patent assertion entities” or colloquially as “patent trolls,” Intellectual Ventures is an enterprise that instead of producing goods or services obtains broad and oftentimes questionable patents solely for the purpose of prosecuting firms for patent infringement.

It was precisely these issues of overly-broad, non-innovative patents and excessive patent litigation that prompted Congress to reform the patent system. When Representative John Conyers (D-MI) introduced an early version of patent reform in 2007, he framed it as a panacea for related economic headwinds at the time: “There are two major reasons the committee wrote the bill. First, too many patents of questionable integrity have been approved. Second, holders of weak patents discovered a novel way to make money, not by commercializing patents but by suing manufacturing companies whose operations might incorporate the patents. This…has hurt the economy.”[3] Four years after Conyers’s statements, the Leahy Smith America Invents Act (AIA) passed the House and the Senate with 304-117 and 89-9 records respectively.[4] It was the most breathtaking overhaul to the modern US patent system in a century. Yet despite the relevance of the Act, the debate around the constitutionality of such reform still remained unsettled.

Unsurprisingly, the AIA is a complex piece of legislation that made significant changes to the U.S. patent system, the most significant of which were the revisions to 35 U.S.C. § 102.[5] For two centuries, the United States possessed a “first-to-invent” (FTI) system, which required inventors to demonstrate that they were the first in time to invent a product in order to be eligible for receiving a patent. The AIA replaced FTI with a “first-inventor-to-file” (FITF) structure: the first individual to claim a patent would be eligible for the patent even if they were not the first to invent the item temporally. Furthermore, the definition of “prior art,” evidence used to determine whether an invention truly is original, was expanded to include any action making an item “otherwise available to the public,” even internationally.[6] With regards to non-section 102 adjustments, the AIA introduced multiple non-judicial methods of settlement in an attempt to alleviate the issue of patent litigation: post-grant review, supplemental examination, inter partes review (IPR), and derivation proceedings.

From a legal perspective, the AIA dangerously straddles the line of constitutionality. One of the foremost constitutional difficulties the AIA faces is the legality of the FITF system as a whole.[7] In essence, this contestation arises from the Copyright Clause in Article I, Section 8, Clause 8 of the U.S. Constitution, which notes that “Congress shall have Power…To promote the Progress of Science and useful Arts, by securing for limited Times to Authors and Inventors the exclusive Right to their respective Writings and Discoveries.”[8] In both historical and common use, including usage at the time of constitutional ratification, “Inventors” was taken to mean “first inventor;”[9] therefore, the FITF system that allows those who are not first inventors to file for a patent would be unconstitutional since a second inventor does not invent but merely “rediscovers.”[10] In 1791, Jefferson and the Patent Board even explicitly forbid an FTF system,which strengthens the case for AIA unconstitutionality from an originalist or textualist approach, an approach often applied in Supreme Court patent decisions.[11]

A host of precedents in U.S. common law confirms these textualist interpretations of the word “inventor.” In the 19th century, the Supreme Court decided in Pennock & Sellers v. Dialogue that “the right is created by the invention, and not by the patent” and that “inventor” must mean “first inventor;”[12] Chief Justice Marshall in Evans v. Jordan also agreed that “the law recognized a property right in the inventor ‘from the moment of invention,’ which was ‘only perfected by the patent.’”[13]

Much more recently in 2011, Chief Justice Roberts wrote in Stanford v. Roche that though “much in intellectual property law has changed in the 220 years since the first Patent Act, the basic idea that inventors have the right to patent their inventions has not. Under the law in its current form, ‘[w]hoever invents or discovers any new and useful process, machine, manufacture, or composition of matter . . . may obtain a patent therefor.’ 35 U. S. C. §101…Our precedents confirm the general rule that rights in an invention belong to the inventor.”[14] Not only does Roberts’s opinion signify that only an inventor and not the first individual to file possesses a constitutional right to a patent, it also provides a reminder that even current law contradicts the FITF system since a second inventor cannot invent or discover a “new” process as described in section 101.[15]

Moreover, while advocates of the AIA hold the 1966 Graham v. John Deere Co. case as the basis for broad Congressional authority to interpret the Copyright Clause, the Supreme Court explicitly wrote in Graham v. John Deere Co. that “the clause is both a grant of power and a limitation…the standard [sic] expressed in the constitution…may not be ignored.”[16] In the context of Graham v. John Deere Co., the Supreme Court held that Congress has leeway to control patentability since patentability is not defined in the Constitution. However, in the case of the FITF system, it should be clear that the Constitution does indeed take a stance on whether or not the first inventor has an exclusive right to a patent.

As enshrined in America’s founding document, first inventors have an inherent right to their inventions. The U.S. Court of Appeals for the District of Columbia Circuit decided in A.F. Stoddard & Company, Ltd. V. C. Marshall Dann that the “Constitution speaks of securing to inventors the exclusive right to their discoveries, not that the inventor must apply. Thus, the Constitution is result-oriented and contemplates that the grant of the patent be to the inventor.”[17] It follows that regardless of who is first to file for a patent, patents must belong to a first inventor and not a first filer. In its haste to bring the U.S. patent system in line with the FITF system adopted by the majority of foreign states, the U.S. legislature seems to have lost sight of the basic protections of property rights written into the Constitution.

Beyond the legal wrangles that plague the AIA, the Act is also questionable from a policy perspective. Four years post-AIA enactment, the dream that Conyers hailed has so far failed to materialize. To begin with, the USPTO has continued to grant the “weak patents” Conyers decried, patents such as Intellectual Ventures’s US 6633900 that fall short of the guidelines for patent eligibility. When the USPTO’s ability to process patent applications becomes impaired, Frakes and Wasserman discovered that the patent approval rate jumped by as much as 16% in some industries.[18] And while an NBER paper estimated only up to 6% of patents granted by the USPTO were weak patents (a very low estimate relative to other studies in the literature), it also found that 15% of patents granted in the U.S. were “low quality” in the sense that regulations governing patent eligibility were too loose.[19] Coupled with a problematic patent grant rate estimated by some commentators to be as high as 95%, the evidence is strong that the matter of weak patents has not been resolved by the AIA.[20] With many experts finding the cause of the problem to be weak patent law, resource shortages, patent reviewer inexperience, or even internal USPTO regulations and incentives, whether the AIA even targets the roots of the weak patent problem comes into question.[21]

More relevant in terms of innovation is Conyers’s second goal: reducing NPE litigation. If anything, the AIA has had little effect on patent disputes, disputes defined to include both litigation and AIA non-litigation procedures (mostly IPR); the number of disputes has risen every year since the AIA came into effect.[22] Litigation in 2015 also increased above pre-AIA levels and still constitutes a vast majority of patent disputes, and NPEs accounted for more than two-thirds of litigation.[23] While the popularity of IPR is increasing and may decrease the cost of patent disputes, the rise of patent suits indicates that the AIA has not meaningfully slowed patent litigation or the rise of NPEs similar to Intellectual Ventures, creating a state of affairs that is particularly detrimental to innovative firms. To illustrate how destructive NPE litigation has become, a study from Boston University concluded that NPEs hampered innovation by costing defendants half a trillion dollars from 1990 to 2010, and widespread weak patents further exacerbate the issue.[24] One commentator has even gone as far as to claim that IPR processes devalue patents and decrease corporate valuations, directly costing the economy $1 trillion independent of NPE activity.[25]

All in all, the AIA as a policy has been ineffective at best and detrimental at worst, and by shifting the U.S. from a FTI system to an FITF system, it potentially deprives inventors of the rights to their inventions. Not only has the Act failed to achieve its objectives in providing stimulus to the economy by reforming the patent system, it has also managed to violate the Copyright Clause and clearly would not withstand judicial scrutiny. Such a blatant violation of individual property rights must and will be remedied once a U.S. person with sufficient standing comes forward to challenge the AIA.

[10] Sharp, Andrew L. “Misguided Patent Reform: The Questionable Constitutionality of First-to-File.” University of Colorado Law Review 84 (2013): 1227-256. Accessed July 18, 2016. http://lawreview.colorado.edu/wp-content/uploads/2013/11/15.-sharp_703_s.pdf.; while this concern was raised in MadStad v. United States Patent and Trademark Office (USPTO), the Federal Circuit sidestepped the question of constitutionality by ruling that MadStad had no standing to challenge the AIA.

[15] The AIA does not amend the text 35 U.S.C. §101. Only three mentions of 35 U.S.C. §101 arise in the text of the AIA: twice to explicitly exclude section 101 from being affected by certain portions of the act, and once to deny patents to human organisms.

← Making It Up As We Go: A Supreme Court Vacancy
The Need to Update DMCA →