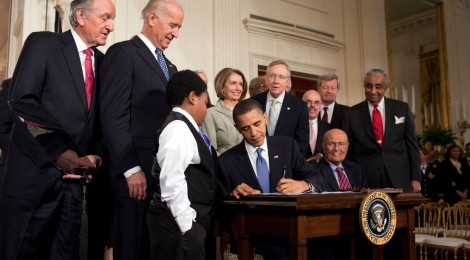 United States v. Texas: Why Texas (and 25 Other States) Are Wrong About Immigration

Ricardo Jaramillo / April 1, 2016 / Comments Off on United States v. Texas: Why Texas (and 25 Other States) Are Wrong About Immigration / Online, Spring 2016

Immigration is a particularly controversial issue in this year’s presidential elections. Behind the political rhetoric, however, lies a series of legal arguments about President Obama’s executive actions on immigration and whether or not they are examples of federal overreach. In November of 2014, President Obama issued two executive orders that created two new federal programs: Deferred Action for Parents of Americans (DAPA) and Deferred Action for Childhood Arrivals (DACA). Combined, these two executive orders allowed undocumented immigrants to be exempt from deportation and to attain a three-year work permit if they had children who were born in the United States or if they themselves were children when they entered the United States illegally.[1] These executive actions have drawn criticism from states like Texas whose governors view these programs to be an unconstitutional overreach of federal author. And yet, the plaintiffs’ arguments against the federal government are not only unsubstantiated and lack grounding in precedent, but also the President’s executive orders can function as perfectly legitimate exercises of prosecutorial discretion.

Shortly after Obama announced his executive orders, the state of Texas and twenty-five other states sued the federal government. The state’s argument in this case rests on two claims: a technical and procedural argument claiming that the Department of Homeland Security (DHS) violated the Administrative Procedural Act (APA) by failing to meet its notice-and-comment requirement, and a broader argument claiming that entirety of the executive actions are unconstitutional and an example of federal overreach.[2] The plaintiffs in this case assert that the DHS did not adhere to the mandatory notice-and-comment requirement, which mandates that federal agencies seek public input before adopting certain policies. Moreover, the plaintiffs argue that the decision to allow undocumented immigrants to have a lawful presence in the United would incur unfair economic burden and stress on the states because it would force states them to pay for public benefits such as driver’s licenses for these individuals.[3] Most recently, the U.S. Court of Appeals for the Fifth Circuit sided against the federal government and ruled to block the immigration orders. The federal government has appealed the case to the Supreme Court and the Supreme Court has agreed to hear the case.[4]

At first glance, the state’s claims about the jurisdiction of the federal government are rather dubious: according to the Constitution immigration policy is within the domain of the federal government and states have no legal bearing to federal immigration law.[5] To make their concerns relevant, however, the states have argued that by giving a lawful presence to certain undocumented immigrants the states would therefore suffer an undue burden by being required to pay for driver’s licenses for the newly-legal residents.[6] Confusingly, no part of the DAPA or DACA makes any such requirement of the states.[7] States are free to choose whether or not the individuals recognized by DAPA and DACA are eligible for driver’s licenses, and are free to require these individuals to pay for their driver’s licenses themselves.[8] Any incurred economic costs would come as a result of previous state laws and regulations being triggered—an indirect effect of DAPA and DACA. The choice to allow individuals with deferred action status to apply for driver’s licenses and the choice to pay for them with tax dollars are choices that the state of Texas had already made previous to the change in federal policy.[9] The precedent set by the Fifth Circuit is troubling: if states are allowed to sue the federal government for any indirect, secondary economic effects to due exercises in federal prosecutorial discretion, then the courts would be flooded with cases and be transformed into arbitrators of policy conflicts rather than legal disputes.

Ultimately, however, the majority of the plaintiff’s concerns are unfounded because at a very fundamental level both DAPA and DACA are exercises in federal enforcement discretion. This means that contrary to the plaintiff’s assertion that the DHS is legislating without the approval of Congress, the DHS is rather dealing with the policy realities of the situation. Technically, according to the dissent writing in the Fifth Circuit ruling, the DHS should have to deport all 11.6 million undocumented immigrants in the United States. Congress, however, has not given the DHS the necessary resources to undertake such an endeavor.[10] As such, in the face of limited resources, the DHS reserves the right to prioritize the enforcement of its mandates.[11] The designation of lawful presence given towards the eligible individuals under DAPA and DACA is a legally temporary designation meant to reflect that discretion of enforcement prioritization. Judge Carolyn King, writing in her dissent of the Fifth Circuit Court of Appeals, agrees: “A decision to forbear from removing a person results in ‘lawful presence’ in the sense that the DHS has decided to countenance that person’s continued presence in the United States so long as DHS continues to forbear.” [12]

The future of both DAPA and DACA is deeply uncertain. Given the recent passing of Supreme Court Justice Antonin Scalia, the future of controversial cases such as United States v Texas is deeply uncertain. Should the Supreme Court rule 4-4 on this case the Fifth Circuit’s ruling would stand. As of this writing, oral arguments have not been heard yet but the justices are expected to rule on this case at some point in the next few months.[13] Even if the Supreme Court rules in favor of the Obama administration, the next president will have ultimate power over the future of the programs. Meanwhile, all sides would do well to remember that these decisions have real and immediate consequences for millions of people in the United States—the overwhelming majority of whom are law-abiding citizens who would love nothing more than to come out of the shadows. Nonetheless, unfortunately what should have been a regular exercise in prosecutorial discretion with a humanitarian intent has been dragged into the courts to achieve political ends.

[5] Article 1 section 8 clause 4 of the US constitution

[8] United States Of America et al., petitioners, On Petition For a Writ of Certiorari to the United States Court of Appeals for the Fifth Circuit,  page 20, (5th Cir 2015)

[12] United States of America et al, petitioners, On a Petition for a Writ of Certiorari, 21