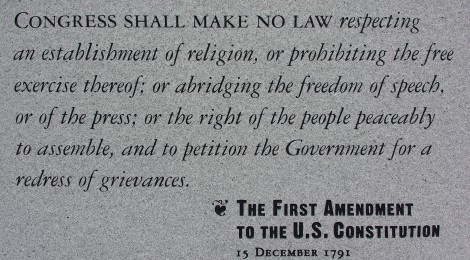 Abusing the Limitations of the First Amendment

Andrew Gerson / August 9, 2015 / Comments Off on Abusing the Limitations of the First Amendment / Online, Summer 2015

In 1993, James Perry was paid to murder a mother, her eight-year old mentally handicapped son, and her son’s nurse. When asked to testify, Perry cited a mass-produced book as his guide for the murder. The book, entitled Hit Man: A Technical Manual for Independent Contractors, published by Paladin Press and written under the pseudonym Rex Feral, describes itself as a manual for beginning a career in contract killing.[1] As a result of Perry’s claim, the victims’ families sued Paladin Press under the assertion that the book “aided and abetted” murder.   While Paladin Press attempted to protect itself under the Free Speech and Free Press clauses of the First Amendment, a U.S. Court of Appeals found that Hit Man was not constitutionally protected, and therefore, the victims’ families had legal ground to sue[2].

The famous example of “shouting fire in a crowded theatre” shows that the First Amendment does not protect all expressions of speech. Along with forms of speech such as libel and blackmail, speech that incites illegal activity is allowed to be restricted.[3] The Supreme Court established a standard for distinguishing inciteful speech from constitutionally protected speech in Brandenburg v. Ohio (1969), where the Court affirmed the constitutionality of the arrest of a KKK leader for a speech that advocated violence. Named after this case, the Brandenburg Test became the standard for determining if speech is inciteful. The test states that inciteful speech can only be prohibited if the speech is “directed to inciting or producing imminent lawless action.”[4]   Under these standards, it is clear why the First Amendment does not protect Hit Man, as this book was the direct cause for a contract kill.   However, recently in a less clear case of First Amendment limitation, the Metropolitan Transit Authority attempted to suppress another category of speech: offensive speech.

In order to prevent the aggravation of its over 8 million diverse daily riders, the MTA had maintained a policy that blocked any advertisement that would offend a proportion of its riders. It was under this policy that the MTA recently banned an advertisement proposition from the American Freedom Defense Initiative (AFDI), a radical-right wing group listed as a hate group by the Southern Poverty Law Center. This advertisement featured a man with a scarf covering his face, next to a quote attributed to a Hamas news station saying, “Killing Jews is Worship that draws us close to Allah.” It was followed by the question; “That’s his Jihad, What’s Yours?”[5]   While this advertisement can be easily deemed offensive, calling it inciteful in the same vein as Hit Man is another point of debate. The MTA banned the sign arguing that it will invoke or inspire some to kill Jewish people. The U.S. District judge sitting on the case, John Koeltl, overturned the ban and said that the MTA “underestimate[d] the tolerant quality of New Yorkers and overestimate[d] the potential impact of these fleeting advertisements.”

While one can sympathize with the motive of mitigating offensive language, justifying the suppression of controversial words under the guise of security draws on many dark pages of American history.   In 1798, John Adams and the Federalists passed the Alien and Sedition Acts, which prohibited press that was critical of government, claiming that it was necessary to national security at a time when war with France seemed inevitable. The late Senator Joseph McCarthy used similar rhetoric to support his investigations of supposed Communists in the 1950s, which caused many innocent and patriotic Americans to be questioned and indicted by Congress. Just like Adams and McCarthy, the MTA attempted to silence American voices under the front of safety. While protecting individuals from a potentially upsetting advertisement is a noble cause, taking advantage of the natural and logical limits of the Free Speech and Free Press clauses is not only ignoble, but history has shown that it can lead to dangerous events including jailed journalists and convicted innocents.

John Stuart Mill, the 19th Century British philosopher and a foundational thought leader for the United States of America, famously advocated for freedom of speech, and strongly opposed censorship. In his work entitled On Liberty, Mill states that silencing opposing or controversial beliefs is considered “robbing the human race.”[6] The MTA may have believed that in silencing the AFDI’s opinions, they were protecting “the interests of society,” however, as offensive as the AFDI’s billboard may have been, it presented no danger to the idea of free expression or those who enjoy our country’s freedom of speech.