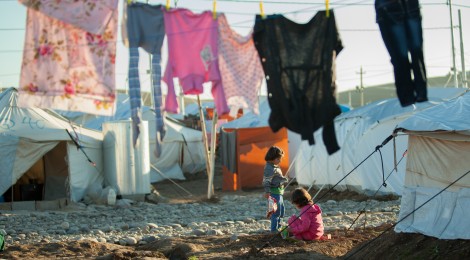 Who Deserves Our Help?

The Islamic State of Iraq and the Levant (ISIS) has gone on a rampage throughout Iraq, roaring one ultimatum: either “convert or die!” [1] On August 7th, 2014, ISIS trapped up to 40,000 Yazidi people atop Mount Sinjar, prompting President Barack Obama to call for military-led humanitarian aid. The Yazidi people are a Kurdish ethnic community based around Yazidism, a religion linked to ancient Mesopotamia.  All major news outlets mistakenly refer to the Yazidi as “refugees” since they have not fled Iraq. [2] In its reign of terror, ISIS has created a refugee crisis throughout the Middle East by persecuting multitudes of religious minorities. ISIS has also created an internal displacement crisis. The Yazidi are not refugees but rather internally displaced people: this distinction—that of “refugees” and “internally displaced people”—is a fine line in terms of international law that has divided humanitarian efforts arbitrarily in the past and has only recently been considered. “Refugees” and “internally displaced people” create a problem of preference for the United Nations when distributing humanitarian aid.

According to the United Nations, 43 million lives have been uprooted by conflict and catastrophe over the last decade. Only 15 million people—one in three—have been able to flee to other countries. These 15 million are defined as refugees. Established by the United Nations’ 1951 Refugee Convention, a refugee is someone who “owing to a well-founded fear of being persecuted for reasons of race, religion, nationality, membership of a particular social group or political opinion, is outside the country of his nationality, and is unable to, or owing to such fear, is unwilling to avail himself of the protection of that country.” [3]

The other 27 million, over sixty percent of uprooted people, including the Iraqi Yazidi, have been displaced inside their homeland. International bodies have only outlined aid for the case of a refugee and not for the other. The sole distinction between the two is whether or not an arbitrary state border has been crossed. The needs of both refugees and internally displaced people are one and the same. The prevailing notion that the internally displaced are a problem that domestic governments should ameliorate has created a dangerous chasm. More and more individuals each day fail to receive the help they need. Their homeland governments are either unable or unwilling to help them. [4] These governments are either in disarray or are acting against the common good by pursuing discriminatory policies and neglecting egalitarian principles. The international humanitarian effort has just recently started to view the internally displaced akin to refugees.

The persecution of “infidels” by ISIS is the most recent scenario illustrating the difference in treatment between refugees and the internally displaced. The UN has worked diligently to coordinate immediate responses to global tragedies as they occur. For example, the UN has quickly set up camps in a five-year program to further aid the internally displaced. Work of this magnitude, however, requires significant financing, making it implausible with the UN’s limited budget. If the United Nations High Commissioner for Refugees is able to build a safe camp, it establishes a de facto government through UN advisors to create order as the internally displaced are given food, shelter, and water. Had the land of the Yazidi been safe, the UNHCR would have intervened and sought to provide as much as it could—but in a war-torn Middle East, too many resources are strained. [6]

While President Obama has agreed to dispatch food and supplies to Mount Sinjar, he has not agreed to reabsorb this populace—any part of it—into the US. Refugees often flee to other developing countries; creating a drain on the resources of the accepting nation. In turn, fewer and fewer countries are willing to accept refugees—even those with resources to spare. Governments such as the United States give refugees the same treatment as other unwanted migrants. At times, refugees who have been forced to leave their homelands, barely escaping the grasp of death, are detained for weeks and months because of missing papers.  The United Nations categorizes the reluctance to accept refugees as one of three immediate challenges that humanitarian aid faces.* While the United Nations is forced to respect the borders of a sovereign state, at times, these governments violate the international principle of non-refoulement. Refugees, instead of receiving refuge, are sent back to lands where they face persecution.[7]

The question of preferentiality is one that plagues refugees. Many are left in dire straits without a course of action. While a person fleeing the Syrian Civil War may find refuge in Jordan, a Honduran facing death at the hands of a cartel will not find refuge in the USA even after traversing the perilous path across Mexico to the American border. Yet as days go by, the United States government is once again involved in aiding those dying in the Middle East but not at their own door. By the same token, a Mexican individual dying due to poverty is not allowed refuge in America. The Mexican would be classified under “economic reasons for migration,” not literal “fear of death.” Yet how much of a difference is there? At these particulars, our laws and humanitarian goodwill confront our morality. The binary of “refugee” and “internally displaced people” which has created an unfair allotment of aid must be more balanced if we want to truly help others around the world.

*The “economic element causing reluctance of developed countries to accept refugees” is classified as the “erosion of the institution of asylum” by the United Nations. The other two immediate challenges are as follows: the “increasingly protracted nature of many modern conflicts, some of which have dragged on for years or even decades” and the “increasingly dangerous climate in which humanitarian actors must work today” (referring to the recent disregard for humanitarianism in favor of violence for the sake of violence). [9]

← How Should We Define a Refugee?
2014 Voter ID Laws: Progress or Politics? →