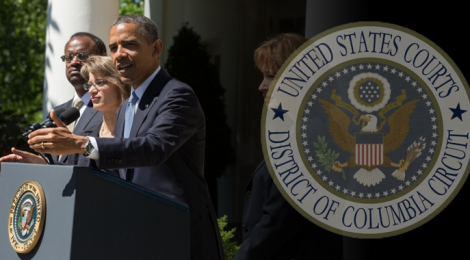 Tackling the DC Circuit Under the Obama Administration

On June 4, President Obama announced three nominations to the U.S. Court of Appeals for the District of Columbia Circuit (DC Circuit). The court was referred to by the President as “the second highest…in the country,”as it often has the last say on major policy issues such as environmental policy, financial oversight, and labor rights. In the last year, the DC circuit posed a major challenge to the Obama administration’s policy agenda by ruling the President’s winter recess appointments to the National Labor Relations Board (NLRB) unconstitutional and deeming Food & Drug Administration (FDA) regulations requiring warning images on cigarette packets a violation of the First Amendment. Many on the left are in favor of Obama’s nominations and argue that these decisions are the result of the court’s ideological bias because, until this May, a majority of the active judges on the Circuit were Republican appointees.

When Obama entered office in 2009, four of the eleven seats on the DC Circuit bench were vacant, but the President’s initial attempts to fill these vacancies were unsuccessful. It wasn’t until May 2013 that Obama was able to secure an appointment to the bench and balance the number of Democrat and Republican appointees. However, by filling the three remaining vacancies, Obama’s nominations will lead to a bench with a Democrat majority. Accordingly, Senate Republicans have been quick to argue that the nominations are both judicially unnecessary and an instance of “court packing.” Although the nominations could be beneficial to the administration’s agenda, they are still in the interest of judicial efficiency, as the Judicial Conference of the United States, a bipartisan advisory group of federal judges, points out. Additionally, a president’s appointment of judges to vacant positions on a bench is quite different from Franklin Roosevelt’s infamous “court packing” scheme of 1937.

Senator Charles Grassley (R – Iowa) is wrong when he claims that the DC Circuit can effectively function as it is right now with only eight active members. The Senator has stated that “the DC Circuit is the least busy circuit in the country…it ranks last or almost last in nearly every category that measures workload.” According to the Administrative Office of the United States Court the DC circuit had the lowest number of filed appeals and second lowest number of pending appeals of all federal appellate courts between 2011 and 2012. However, these statistics might not account for the unique nature of the Circuit’s workload. As Chief Justice John Roberts points out, “about two thirds of the cases before the DC Circuit involve the federal government in some civil capacity, while that figure is less than twenty-five percent nationwide.” This indicates that the Circuit’s caseload is unique among federal appellate courts. Thus a simple comparison of the number of pending cases might not be an appropriate assessment.

Furthermore, The Fact Checker reveals the difficult nature of the Circuit’s workload. A high proportion of the cases heard by the Circuit are administrative appeals, which can be more time consuming than other types. The Circuit also publishes written opinions for a higher percentage of cases. In fact, the Judicial Conference of the United States, a nonpartisan body headed by Chief Justice Roberts, who was a Republican appointee, has itself stated that all eleven judgeships should be filled given “our current caseload.” The judicial necessity of these appointments evidently invalidates the “court packing” argument.

Moreover, the DC Circuit nominations could play an important role in facilitating en banc review. En banc review is a rehearing of a case by all the active judges of a bench. It is usually ordered to maintain uniformity between Circuit decisions or to decide questions of extreme importance. The DC Circuit Law Review has recently argued that with only eight active members on the bench, it becomes extremely difficult for parties to petition for en banc review. This is because a majority is in most cases required to determine en banc proceeding, as stipulated by the Federal Rules of Appellate Procedure. At the moment, this majority is five out of eight judges and is difficult to obtain, considering that at least four out of the five judges that were not on the three-member panel that originally heard the case would need to consent. The fact that only one case was heard en banc between 2011 and 2012 is evidence of the difficulty of obtaining review. Given the rarity of approved writs of certiorari, en banc review is usually the final decision most parties can hope to receive. If the President is successful in his attempt to appoint three additional judges, the new majority required for a review would be six out of eleven judges, which is easier to obtain than five out of eight. By facilitating en banc review, which leads to uniformity between a court’s decisions, Obama’s plan could lead to a more equitable justice system.

There is a crucial difference between President Franklin Roosevelt’s “court packing” plans and Obama’s. By filling the three vacancies on the DC circuit, Obama is not changing the structure of the DC Circuit, whereas Roosevelt attempted to do just that by adding five justices to the Supreme Court. In fact, up until 2009, there were twelve seats on the circuit, but a Senate reform reduced that number to eleven. Rather yet, Grassley’s proposal to limit the DC circuit to eight members is a closer relative of FDR’s “court packing”—or more accurately “court constriction”—because his plan structurally changes the Circuit.

← Interview with Matthew L. Myers: the First Amendment and Commercial Speech in Tobacco Control
The Precedent on PRISM →