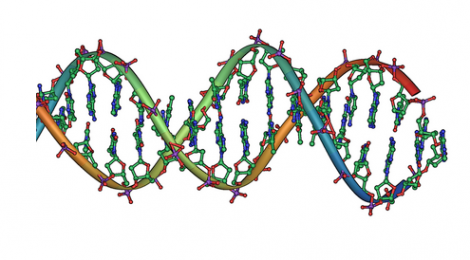 In 1996, Drs. Haig Kazazian and Arupa Ganguly at the University of Pennsylvania began cutting-edge clinical research in genetics, examining specific locations of the human genome for mutations that could indicate increased risks of certain cancers.  In the process, they had to isolate specific genes by breaking the bonds on either side of the genome sequence and compare them to preexisting data for normal sequences.[i] Two of the genes involved in their research, named “BRCA1” and “BRCA2” and both linked to breast and ovarian cancers, had been “discovered”—that is, located on the human genome and sequenced—by scientists at Myriad Genetics, Inc. who were also affiliated with the University of Utah.  These scientists at Myriad chose to patent the two genes, taking an aggressive stance in the burgeoning area of biological patents.[ii]  In 1998, two years after Drs. Kazazian and Ganguly began providing genetic testing services, Myriad sent cease and desist letters claiming patent infringement to Dr. Kazazian.  Kazazian and Ganguly, along with numerous other researchers and clinicians threatened by this accusation of patent infringement, were forced to cease genetic testing that provided women multiple sources of diagnosis at significantly lower cost than Myriad’s testing. [iii]  In other words, the patents require that clinicians and researchers obtain permission from Myriad to look at the BRCA1/2 sections of the human genome; the company owns exclusive rights to the genes themselves and all information contained in these sections of the human genome.[iv]

As of today, thousands of human genes have been patented.[v]  Biological patents gained traction following the pivotal Diamond v. Chakrabarty case in 1980, in which the U.S. Supreme Court ruled that genetically modified living organisms may be patented.  Chief Justice Warren E. Burger wrote in the decision that “anything under the sun made by man” is patent eligible under 35 USC § 101, setting the tone that allowed for a surge of biological patents in the following decades.[vi]  Now, a host of private companies, research labs, and universities hold patents to these human genes and have sole authority in deciding what research and clinical rights to grant others, if any.

Because we all possess the BRCA1/2 genes, along with the other thousands patented, the patentability of a product of nature seems to defy common sense.  The protection and reward aspects of patents must of course be considered: the option of gene patenting does provide economic incentive for genetic research.[vii]  But the impact on public health, scientific progress, and civil liberties far outweighs the economic motivations for gene patenting.  In short, the BRCA1/2 patents prevent women from getting more than one opinion about their genetic results and face ludicrously expensive charges for genetic testing (usually upwards of $3,000) with restrictive insurance requirements.[viii]  Fewer instances of testing for these reasons harm not only the women from whom better clinical testing is withheld, but also the progress of science; Myriad’s patents restrict the collection of more data, slowing the process of more accurately interpreting mutations on the BRCA genes.

In 2009, the Association for Molecular Pathology, along with researchers, clinicians, cancer patients, and other scientific organizations, represented by the American Civil Liberties Union, brought suit against Myriad Genetics, as well as the U.S. Patent and Trademark Office, for invalidation of the BRCA1/2 patents.  The case is ongoing, with the U.S. Supreme Court hearing for oral arguments in April of 2013.[ix]

Myriad’s counsel misrepresents the impact on public health from the perspective of Myriad’s contribution.  In oral argument in district court, they sermonized, “Briefly… Myriad discovered the BRCA1 and BRCA2 gene.  They discovered what it meant.  They discovered the mutations on it and that is the gift; that is what they gave to society as a whole.”[x]  The irony of counsel’s diction of “gift” is obvious; with a monopoly on BRCA1/2 testing, Myriad Genetics is able to charge significantly more than past competitors (some of whom conducted genetic testing for free, and were prevented from continuing their research by the threat of patent infringement).  While Myriad’s counsel pays lip service to BRCA1/2’s impact on public health through their alleged “gift” argument, they are quick to direct their argument toward restrictive minutiae: “What we are talking about now though is not that discovery that is in the public domain.  We are talking about what do the patents actually cover?  That is a different issue.”[xi]  Myriad’s counsel must, of course, argue for the validity of its client’s patents in a systematic manner with attention to the scientific detail that the complex patents demand.  Yet they misdirect the discourse surrounding gene patentability by miring the Court in chemical minutiae.

Within this restricted scope, Myriad’s defense draws the attention of the Court away from the lack of ingenuity involved in the composition claims through flawed representation of the complexity of the isolating and sequencing processes.  They conceded in the Southern District Court in February of 2010 that, “You don’t get patents on hard work,” but went on to state that, “Hard work is certainly suggestive of how difficult it was to find [the BRCA1/2 genes] and what we are really claiming here.”[xii]  They recognize that the “expansively construed” “new and useful” language of 35 USC § 101 makes it so that the more difficult the process of isolation seems, the more “new” it will seem.[xiii]  This exaggeration of difficulty is compounded by the defense’s tactic of miring the Court in a misrepresented, narrow view of the composition claims while insinuating that a lack of scientific expertise prevents both counsels and the Court from considering the case more broadly.  Myriad’s counsel explanation of the hurdles surmounted in locating and isolating the BRCA genes is saturated with phrases such as, “they tell me,” “this is anecdotal and hearsay,” and “it boggles the mind.”[xiv]  By using language that devalues their own personal scientific authority, Myriad’s lawyers aim to discourage the Court from considering the routine nature of Myriad’s processes.  This obfuscation proves especially useful to the defense in the second hearing by Federal Circuit, during which Myriad’s counsel stated that, “the Holy Trinity of Mayo [v. Prometheus] is: well-understood, routine, and conventional.”[xv]  In Mayo Collaborative Services v. Prometheus Laboratories, Inc., the U.S. Supreme Court struck down patents that were based on a law of nature.  This 2012 case caused the Supreme Court to vacate and remand the Federal Circuit’s decision to uphold Myriad’s BRCA1/2 patents, so Myriad’s counsel must distinguish the BRCA patents from those invalidated in Mayo.[xvi]  The harder and more complicated the process from blood/tissue sample to genetic results seems, the more likely it is that the Court will uphold Myriad’s patents.  By this means, Myriad’s defense misrepresents and reduces human genes to mundane chemical compositions of which, they assert through clever wording, the Court is not equipped to understand the nuances.

This is a case of first impression that has the potential for broad impact on public health and the biotechnology industry.  James Watson, who won the Nobel Prize in 1962 for his joint discovery of the structure of DNA, wrote in his amicus curiae brief: “The myopic viewpoint thinks of a human gene as merely another chemical compound, composed of various bases and sugars.  But history and science teach us otherwise.  A human gene, which is a product of nature, is useful because it conveys vital information.” [xvii] While the brief is “in support of neither party,” he vehemently rejects the reasoning behind gene patents: “A scientist does not—and should not—expect to obtain a legal monopoly controlling the information encoded by human genes.”[xviii]  Through verbal obfuscation, Myriad’s counsel has successfully brought about this “myopic viewpoint” in the Federal Circuit—twice.  What remains to be seen is the final U.S. Supreme Court decision, which will be released early this summer.  While the judges in the Federal Circuit favored chemical minutiae and the biotechnology industry’s reliance on gene patents over the complexities of human DNA and the impact on public health, perhaps the Justices will take a more common sense view on an area of intellectual property law that cannot and should not be reduced to merely another chemical compound.

Michael Chang-Frieden is an intern at the American Civil Liberties Union (ACLU).  The views expressed above, however, represent his own and are entirely separate from those of the ACLU.