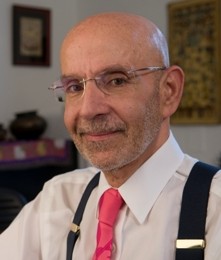 This article was originally published in the Fall 2012 issue of the Columbia Undergraduate Law Review.

Dean Peter J. Awn received his Ph.D. in Islamic religion and comparative religion from Harvard University in 1978. Previously he earned a B.A. in Philosophy and Classical Languages, and an M.Div. in Christian Theology. He is presently Professor of Islamic Religion and Comparative Religion. He has been visiting professor at Princeton University and has lectured widely to academic and business professionals on the role Islamic religion plays in the current political and social development of the Muslim world. Professor Awn was the first recipient of the Phillip and Ruth Hettleman Award for distinguished teaching and research. His book, “Satan’s Tragedy and Redemption: Iblîs in Sufi Psychology”, a study of the devil in Islamic mysticism (Sufism), was the recipient of a book award from the American Council of Learned Societies.

Marc Heinrich is a Columbia University freshman and CULR’s publisher. He can be reached at [email protected]

Marc: Do you mind speaking a little bit about your career/life, how you became interested in this? How you came to here?

Dean Awn: My interest originally was because I have a Christian theology as well as a PhD in comparative religion with a specialty in Islam. I got into that because my family was Lebanese Christians, and I was interested in the history of religious minorities in the Middle East. Had to study for contextual reasons, found that much more interesting. My area of specialization is Islamic mysticism, and that has brought lots of interesting comparative overlays with Buddhism, Christianity, Judaism, etc. This is the best job on the market in the year I was looking which was in the late 1970s. And now I’ve been at Columbia now 35 yrs, teaching mostly Islamic religion and occasionally LitHum.

Marc: Do you like LitHum [Masterpieces of Western Literature]?

Awn: Oh yes, I taught it almost every year since I became a dean so I enjoy it a lot.

Marc: What is your perspective on the controversy regarding whether women have the right to wear headscarves…?

Awn: There are first two issues. The whole construction of what secularity and secularism mean is somewhat idiosyncratic of as you move from cultural area to cultural area. So in the French context, you will find that the French ideal carries over to the modern Turkish constitution. there is this notion, laïcité. That is the core notion. The argument is, at least in the school system, even though we realize that people come from a whole range of religious backgrounds, or no religious backgrounds, that symbolically everyone needs to be the same because that’s the way we create the cohesion of French society; not by celebrating difference but by celebrating the commonality. And so in school you can’t wear a cross, you can’t wear a yamaka, you can’t wear a headscarf. So that is one issue.

In the United States, now, what they will do with religious schools, however, as you’ll find frequently in Europe government supports with government funds education of religious schools in order to give up control of the equality of the curriculum and diversity of the curriculum. In this country, we construct singularity in a different way. It isn’t what you wear. You can wear bananas on your head, have eighteen piercings, dye your hair purple and green (you get an A in my class I’ll have a lot of respect for you) it isn’t what you look like. Nor do we see what you wear as symbolic of difference that threatens common ideas. We have no constructed myth of racial uniformity in this country. It is impossible for a country for a country of immigrants. So the ideals are, at least as we encounter them initially, abstract and then become embodied in the structures of the state, and in the way we live. But not in the way we look, not in what we believe religiously, if we believe anything. However, while we let people wear what they want. Will we ever put a dime into religious school? The answer is no. That’s where we draw the line.  So the French draw the line in the state school system. But we draw the line, in terms of supporting religious education.

The more interesting question is the burqa. Where is that is now outlawed in any public environment. First and foremost what you have to realize it is very difficult from the point of view of the study of religion to unravel what is religious and what is the hold over from the culture in which the religion is imbedded. So to be quite honest, most Muslims find the burqa bizarre. It is by no means standard practice in the Islamic world. They find it purely the result of or the consequence of various tribal cultural areas that overtime develop what they would consider a somewhat extreme attitude towards the control of female sexuality. There is no requirement that you can defend religiously, to completely cover the face and the body. The only thing you can find in the Qur’an is basically the idea of modesty for both men and for women. There are no details about what that means. Head covering were ubiquitous among Christians, among Jews, and then Muslim women. Roman catholic forget, its changed now, people don’t necessarily observe this since the 60s,but Roman catholic women always had to put something on their heads before they went to church. They never knew why. They just knew that you don’t go to church without putting a scarf or wearing a hat or something. It was a vestigial gesture to head coverings. You will find it in the orthodox Jewish community. Women wear scarves or women wear wigs, which are exactly for the same purpose as a headscarf in Islam.

But then we go back to is there logic in arguing you cannot cover you’re face? Can you make a security argument? Along those lines, you have a passport photo. We are not going to have a passport photo of your eyes because then there is now way to check whether or not its you. So there is a sense in which what you are attempting to manage is a cultural practice not religious practice even though the people themselves who do it will argue oh no this is part of Islam this is part of my Islam, which one has to respect. But I’m not sure the state doesn’t have the right to question whether or not individuals can be recognized at particular key points. Now you may want to say wear your burqa around town if you want, but you’re going to have to take passport photos, you’re going to have to show you’re face if you want to travel.

What’s also very interesting is under a bruqua you’re not sure whether it is a man or a woman. When someone is that completely covered in some big flowing thing as we’ve found so often when you’re trying to escape in certain parts and want to be incognitive as a male you can throw on a burqa and start running around.

So am I completely against it, this kind of intrusion? Do I think it is absolutely necessary? No. I think you can follow a more narrowly focus in insisting that in any time when security is of concern, you have to be willing to show you’re face. And if your not then you’re the one who has to make the choice. You don’t get a passport. You don’t travel. You don’t do this or that if you’re not in a position to be willing to conform to the security regulations but I think every country has the right to impose.

To me it’s a very interesting thing. To show you again, where we differ in a very profound way. Is not just in this issue of how you construct the secular, but also of how you deal with extreme hate. Actually, you may know that in France and in Germany and I think a number of other European countries, it is against the law to deny the holocaust.

Marc: Another question I was going to ask is, I don’t personally know a lot about and would be interesting: how is the separation of the church and state in France, how is that the same or different from that in the United States, as far as how the government looks towards religion?

Awn: I would say that the separation is much more, at least from an ideological point of view, radical. Except that you could argue since they support, to some degree, religious schools that they are involved in some aspect of education that has a religious faith to it. So from that point of view, there are none of these other than we still have with an established church. The French, well, statistically, in France the number of people who attend church, who identified themselves as religious is relatively small. So the government’s engagement in any serious way with religious institutions is not great.

De facto, in the United States, while clearly we preach the separation of church and state. The ability of religious institutions to interface with government in the framing of laws and policies etc. is I would argue far more entrenched than what you’d find in France. It is also very interesting that that if we were to look back on when did it become essential now for major politicians to talk about their religion.

Marc: and you know “God bless…”

Awn: And yes you would not find that in France. That is nobody’s business. Here it is what’s interesting. The French are very serious about it. There are certain things you talk about in the press and you talk about publicly about an individual’s life, and there are certain things that are none of you’re business. Your private life, your sex life–I mean sure scandals hit–but the French are appalled at the degree to which we explore what is going on in everyone’s underwear especially people in prominent positions. That’s people with mistresses, people who have extramarital affairs, people who might be prominent but also homosexual. You just don’t talk about it. The French find the American press astonishingly inappropriate in dwelling so intensely on private issues that really no one’s business and don’t affect the quality of one’s performance in government or elsewhere.

So issue of public and private is far more valued in and imbedded in French society than in American society. It is not only publically secular in terms of not being, not offering to any great degree the ability of religious institution have an impact on both the running of the state and policy. There is also this issue of the moral status of an individual especially as it relates to one’s private life. This is not as much a central focus as it is in this country.

What really perplexes me is how when you have these very logical within the context of constructions of the secular and how religion interfaces or not with the public sphere and the government. And the whole issue with free speech. How do you determine whether one’s better than the other? It’s difficult to say.