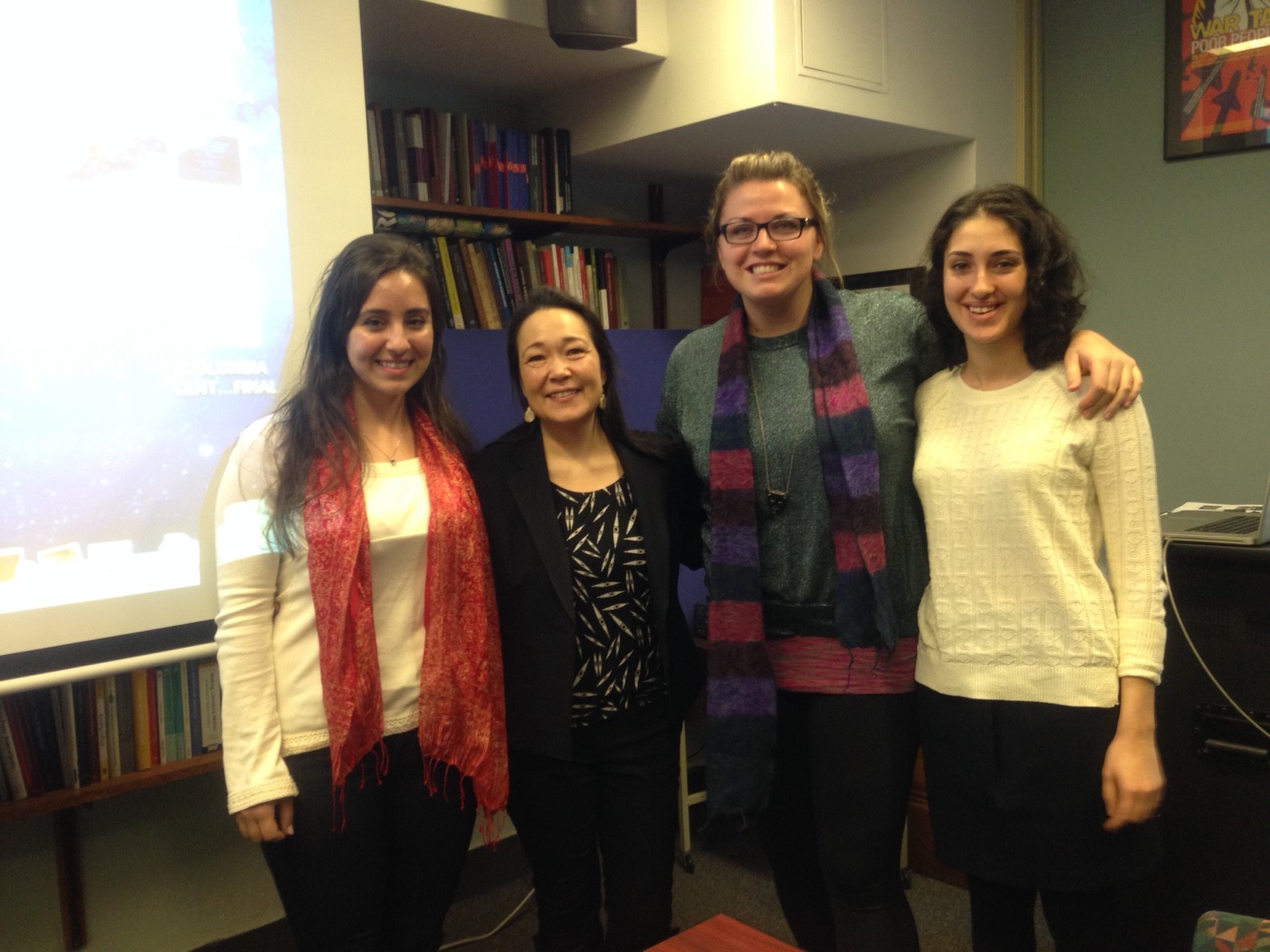 On November 20th Aviaja E. Lynge, HRAP Fellow at Columbia University, gave a presentation titled: “Indigenous Peoples’ Right to Education: Implementing a Culturally Appropriate Education System in Greenland.” Lynge holds an M.S. in Social Anthropology from the University of Edinburgh and currently works at the University of Greenland, where she is Head of Department for Further Education. Lynge began the presentation by thanking her mentor Elsa Stamatopoulou, Director of the Indigenous Studies Program at Columbia.

Lynge contextualized her presentation by starting with a description of her own childhood in Greenland and her Inuit family, because, she said, “I am part of the story I am going to tell you.” She recounted the influence of her grandparents and parents, who helped to foster her interest in equality and human rights from an early age. Her parents were involved in the decolonizing movement in Greenland, and her grandparents closely followed international rights developments, including the Civil Rights Movement in the United States, even naming their beloved dog after Martin Luther King, Jr. Lynge shared photos of herself as a young child and the stunning landscape of Greenland, calling the rivers and the mountains her “first university.” When she was leaving Greenland to go to college in Scotland, her father told her: “You’re Inuit, you’re short, and you’re woman. People will always make you feel smaller because of that, but you’re big inside and I believe in you.” Lynge, second from left, with attendees of her presentation.” Photo by Elsa Stamatopoulou.

After earning her degrees abroad, Lynge returned home and became involved in reforming the Greenlandic education system. The driving impetus behind her work is the promotion of the right to education for Inuit children. Inuit peoples make up approximately 89% of the population of Greenland, but have been colonized by Denmark for over two hundred years. Although they became self-governing in 2008, the country is still working to transform deeply entrenched social, cultural, and political norms that have imposed European standards on the Inuit peoples. The westernized education system that was established by the Danes has exclusively rewarded students who excelled in learning the Danish language. Students who can’t speak Danish aren’t even able to enter high school, which unsurprisingly has resulted in a lack of opportunities, the loss of socializing skills and low self-esteem. In many children, the internalization of shame has caused a paralyzing sense of being unable to learn and worthlessness. It is clear that in the historical discourse of Greenland’s school system, those who have succeeded have had to assimilate, creating a strong polarization between those who “make it” and those who do not. Moreover, this discourse has created an equivalency of Inuit culture and language with failure. As it turns out, the majority of young people don’t make it in the system; 62% of all children can’t enter further education, and half of those who enter high school drop out. Lynge posed the question: How it is that indigenous populations, in general, are the least educated in the world? Avoiding our tendency to blame the parents, how can we turn it around and ask, what are we, as educators, doing wrong?

Lynge works to redefine and restructure the national education system to utilize Inuit pedagogies. The country’s goal, supported by all political parties, is to create the “world’s best school”for the Inuit children that implement the ways they learn best. The hope is that they will not only have equal access to education, but equal access to success within it. Some of the pedagogical principles she is working to develop in the Greenlandic schools include: to respect and utilize silence in the classroom, as most Inuit children are raised to not interrupt elders and struggle with vocal participation; to make learning more of a collective process, rather than focusing on and rewarding individuals; to contextualize learning with concrete, visual examples and participatory, active learning; to encourage children to be their own evaluators and goal-setters, and be their own agents of change; and to emphasize a holistic approach to education that simultaneously nourishes children’s emotional, physical and intellectual selves.

The most challenging aspect of Lynge’s initiative regards the controversy of including “culture” in the curriculum. The most common accusation she faces is that by emphasizing the importance of Inuit culture, she will be taking the students “back in time,” obstructing their ability to be part of a modern world. However, Lynge stresses that her goal is to employ existing Inuit pedagogies, skills that have been taught and learned throughout the past, and then meld these practices with new research and methods. Part of her project is actively working to try to change the common perception of culture as material. She noted that people tend to think of “teaching culture” as the creation of objects, such as clothing or art, whereas she considers it in an immaterial light, in terms of norms and values that can enhance the learning process. Lynge insists that culture must be understood in its intangible form and that it is compatible with the “modern” world.

Crucially, Lynge noted that teachers also have to go through the decolonization processes, as most Inuit instructors continue to function within the Danish framework they inherited. “You have to remember, we haven’t had this mental decolonization yet,” she said. Unlike most other nations, when Greenland “decolonized” in 1953, they assimilated with Denmark. “No one really asked, equality on whose terms? On what conditions will we create Greenland?”Now that she and other educators are working to ask these questions and return the emphasis to the validation and utilization of Inuit pedagogies, she underscores the importance of breaking the cycle and not requiring the children to assimilate to a European standard: ”It’s a human right to be who you are.”

Caroline Fidan Tyler Doenmez is an M.A. candidate in the Columbia University Human Rights Studies program. Her main areas of interest concern sexual violence against indigenous women and girls in the US and Canada, as well as the collective rights to culture and education.