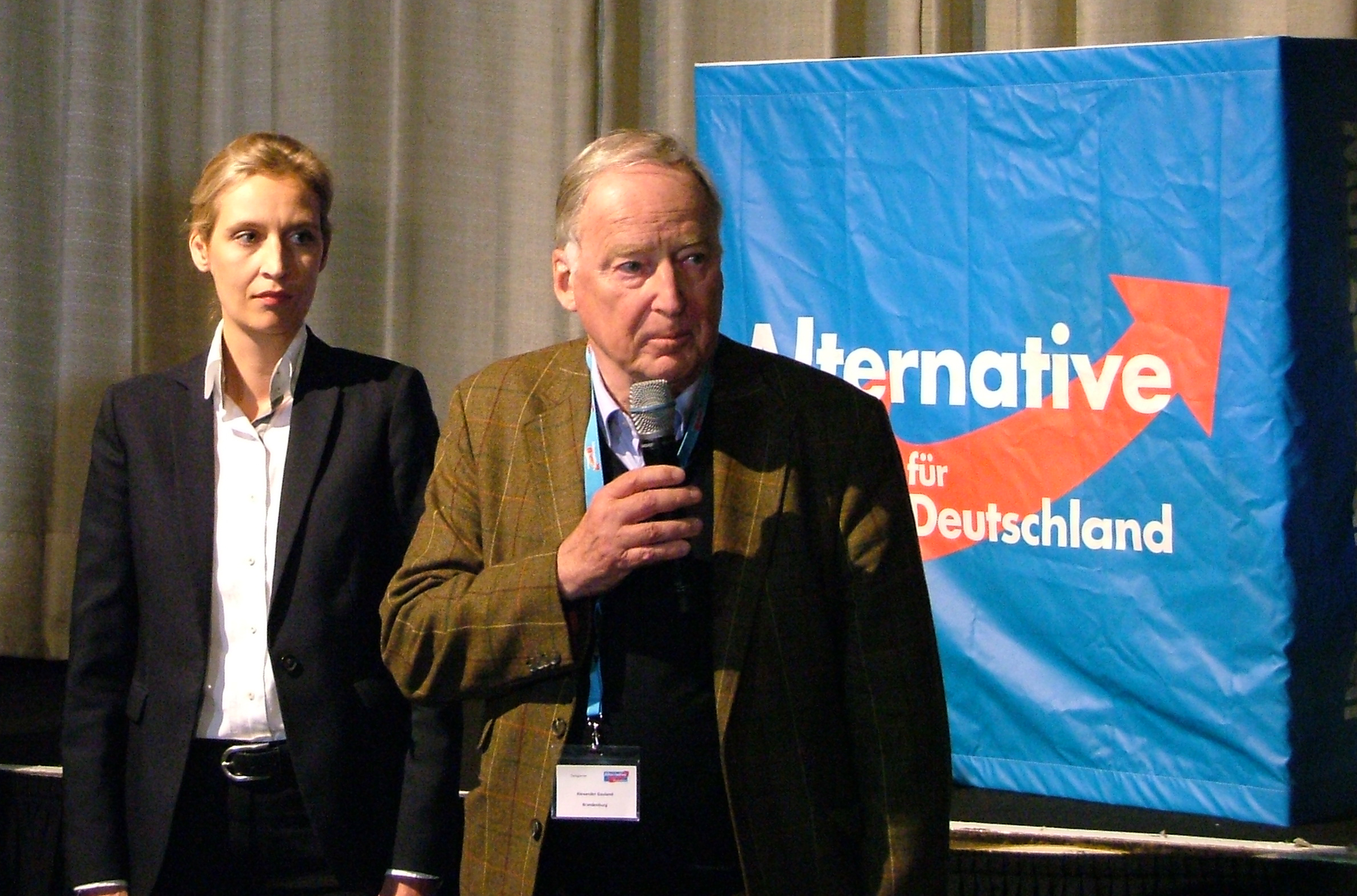 By: Guest Contributor Ali Cain. Ali is a M.A. Candidate in the European History, Politics and Society Program at Columbia University. Her MA research analyzes how the coronavirus pandemic is impacting the Alternative for Germany Party’s anti-refugee policies and rhetoric.

The Alternative for Germany Party (AfD) is a far-right populist party that promotes protecting the German identity, traditional family values and climate change denial. Once a fringe party unable to meet the 5% voting threshold to enter the German Parliament, the AfD’s opposition to migration policies and xenophobia has elevated its support. After German Chancellor Angela Merkel opened Germany’s borders to one million refugees in 2015, the AfD both seized upon and helped instill fears over cultural differences, crime and violence. The Party’s fearmongering tactics were so successful that it became the third largest party in the German Parliament in the 2017 federal election.

The AfD continues to be relentless with its attacks upon refugees as exhibited in its response to the recent fires in the Moria refugee camp on the Greek island of Lesvos. Capitalizing on lingering societal anxiety from the 2015 migration crisis, the AfD criticized the German government for agreeing to take in 1,500 of the 13,000 refugees stranded at Moria. Although it’s unclear whether the fires were set intentionally, the Party argues that refugees started the fires to get to Germany. Currently, AfD’s approval ratings are at their lowest point since the 2017 election as more Germans rebuke populist politicians, especially as there’s increasing support for the Merkel government’s response to the coronavirus pandemic. It’s unclear how the AfD’s theories about the Moria fires will impact its support as a recent poll found that the majority of Germans are open to accepting refugees from Moria as long as other European countries do so as well. It’s almost certain, however, that the AfD’s exploitation of the Moria fires will continue to harden xenophobic attitudes and heighten the demonization of refugees.

The AfD’s deprecation of refugees as a central party component is most evident in its transition from an anti-European Union (EU) party to Germany’s leading voice on nativism. Upon its establishment in 2013, the Party opposed  the Eurozone and resisted bailing out neighboring countries during the 2008 economic crisis. Most of its founders and supporters were disaffected members of Merkel’s Christian Democratic Union Party (CDU) who were fiscally conservative and against using German tax-payer funds to help struggling countries like Greece. As refugees increasingly arrived at European shores in 2015, opposition to the Eurozone developed into vehement resistance to the EU and open borders. The AfD’s voter demographics and party leadership shifted to reflect extremely conservative values, including the belief that the German identity was threatened by newcomers. The Party seized on isolated incidents of violence, including migrant attacks on women in Cologne on New Year’s Eve 2015 and a 2016 terrorist attack by a failed asylum seeker in Berlin, to projecta picture of all refugees as criminals and terrorists.

By leading the charge against Merkel’s migration policies, the AfD has obtained its highest levels of success yet.  It’s not only the third largest party in the Bundestag but the main opposition party as well. Although the mainstream parties were successful in blocking out the AfD from joining the ruling government coalition, its status grants the Party a bigger public platform and more financial resources. The AfD is additionally represented in all 16 state governments and the European Parliament’s Identity and Democracy Group. Although the AfD’s success is alarming, 2017 may have been the Party’s peak. A recently published study by the Bertelsmann Foundation revealed that only 20% of Germans voters support populism. Although it was concluded that populist support began waning in 2019, the government’s COVID-19 response has recently increased Merkel’s appeal. Her current approval rating is over 70%, compared to 56% in 2019. It was also found, however, that AfD supporters have become more right-wing, signaling that those who remain supporters fully embrace the AfD’s xenophobic, nationalist beliefs.

The AfD’s Facebook page reflects its deepening shift to the far-right. Its COVID-19 response mimics that of Donald Trump in denying how serious the pandemic is and arguing that mandated mask requirements violate German’s constitutional freedoms. The Party constantly criticizes Merkel, “the Left,” and climate change activists. The AfD also helped encourage anti-coronavirus lockdown protests in Berlin that included the storming of Germany’s Parliament building in late August. The Party’s anti-refugee rhetoric continues to dominate its social media in an attempt to salvage its support among centrist voters. In 2020, the AfD has posted more social media content on migration than on COVID-19. Its Facebook posts on the Moria fires and the government’s response, including claims that Merkel is the “mama of Africans” and is encouraging refugees to start future camp fires, demonstrate that the scapegoating and demonization of refugees remains the Party’s main initiative. Given its decreasing public support, the AfD will continue to exploit the situation for its own political gain just as it has done since 2015.

The Moria fires and the AfD’s response reveals how lack of European unity on migration policies hurts refugees and bolsters populist parties. Advocates have criticized the horrific conditions of the Moria camp for years with no action from the Greek government and the EU. Greece’s pleas for more EU assistance have been consistently put off, increasing strain on the country’s already fragile welfare and economic systems. As a result, the Greeks have become more belligerent in rejecting asylum seekers as demonstrated in reports that authorities forced 1,000 asylum seekers onto inflatable boats and abandoned them in the Mediterranean this past summer.  In the aftermath of the Moria fire, the Greek government blames refugees for arson. 13,000 remain homeless and although Greece said it will build a new reception center, it will take months to do so. Along with Germany, nine other EU countries announced that they will take in 400 refugee children from the fires. This is not enough and will never be enough.

The European Commission’s release of its Migration Pact on September 23 destroys any lingering hope that there will be a unified European response to migration and emboldens far-right parties like the AfD. Instead of developing mechanisms to enforce mandatory resettlement quotas for all 27 EU member states, the Pact gives states the option to accept refugees or help pay for their deportation to countries of origin or transit. Merkel’s government will face a precarious decision as the AfD may call for Germany to increase its financial contributions for deportations. Additionally, the Pact expands the Dublin Regulation, which mandates that refugees must register for asylum in the country they arrive in. If an asylum seeker has family in an EU member state, they could be relocated there. Given that Germany continues to accept thousands of refugees, it will be responsible for reuniting families if the Pact is approved. The AfD has jumped on the Pact by relying on its traditional culture war narrative that paints refugees as incompatible with the German identity; AfD Federal Spokesman Joerg Meuthen wrote on Facebook, “the new EU Migration Pact is a fight against our entire western way of life, welfare state, freedom, and Christian culture.” The AfD, along with other European far-right parties, started a petition against the Pact and are arguing that the EU is trying to replace the “people of Europe” with refugees and migrants.

COVID-19 has so far helped decrease support for populist parties in Europe. However, migration issues, such as the Moria fires, may revitalize the AfD’s appeal at home. The 2021 federal elections and Merekl’s planned departure grant the AfD an opportunity to increase its power in the Bundestag and participate in a coalition government. The Party’s nativism will only increase and put more refugees and migrants at risk.