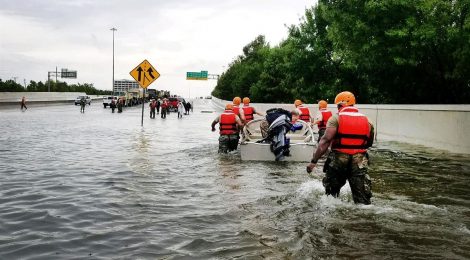 Starting on August 25, 2017, Hurricane Harvey pummeled through the south-eastern region of Texas. Those who were displaced flocked to welcoming organizations and nonprofits which handed out supplies and basic necessities. Among those welcoming Harvey’s victims were sanctuaries such as Rockport First Assembly of God, the Harvest Family Church, and sanctuary of Hi-Way Tabernacle.[1]

However, when these sanctuaries applied for Federal relief for their own damages, they were unable to do so. Despite opening their doors to in-need community members, these organizations were restricted from federal aid simply because of their institutional status. While it is true that all three sites are places of worship, none of the services provided were restricted to those of specific denominations. The basis of FEMA’s restriction of aid has precedent in the separation of church and state presented in the First Amendment: “Congress shall make no law respecting an establishment of religion.” The allocating of public funds towards an institution of a single denomination results in a complex relationship between the government and private places of worship. Yet when disaster strikes, and these places of worship save all members of the community, it is difficult to provide justification for withholding public funds. After all, nonprofits – which covers all religious institutions under 501-3c status – are responsible for funding 80% of all public relief efforts. FEMA’s approach regarding the distribution of funds should look to the court cases of Locke v. Davey and Trinity Lutheran v. Comer which set precedent for the First Amendment’s applicability and why Houston churches serving the entire community are thus deserving of public funds.

According to the Free Exercise Clause of the First Amendment, “Congress [shall not prohibit] the free exercise of religion.” The implications of this clause have been addressed in many court cases, most notably in the 2003 Locke v. Davey, in which Washington state created a scholarship program called the “promise scholarship” to assist “academically gifted” students in their expenses after high school. One particular student decided to enroll in Northwest College, which was an eligible choice approved by the scholarship program, despite being a private, church-affiliated school. However, the student decided to pursue a “pastoral ministries” degree, which is universally regarded as preparation for a church-specific occupation. The state decided to withhold scholarship funds, resulting in the student initiating a lawsuit on the basis of “Free exercise” denial. The 9th Circuit Court initially found the scholarship program’s terms unconstitutional, before it was referred to the Supreme Court. The Supreme Court ruled that the scholarship program was not in violation of the Free Exercise clause.

The Court found that Washington State’s scholarship program never restricted a student from practicing his or her religious beliefs, nor did it assign scholarship funds on the basis of religion. In addition, the scholarship program never required students to explicitly choose between “their religious beliefs and receiving a government benefit.”[2] If this precedent is applied to disaster relief for religious institutions after Hurricane Harvey, FEMA should be allowed to withhold funds for a place of worship that assists only those of its own denomination. Since the recipient of the scholarship tried to use public funds towards a pastoral degree applicable only in the Christian ministry, the issue here is public funds appropriated towards a private or denominational interest. In this case, the government has the right to withhold funds.

The devastation of natural disasters, which often affect whole communities, complicates the role of the government in disaster relief. In 2002, President George Bush decided to fund the reconstruction of the Seattle Hebrew Academy, after it was ravaged by a 6.8 magnitude earthquake. The White House “saw no reason why a group that is damaged by an earthquake should be discriminated against because its mission is religious.”[3] Moreover, the Federal Government funded the rebuilding of parochial schools and church-serviced nursing homes after Hurricane Katrina. Therefore, denying the Houston churches emergency funding would represent a denial of funds solely based on the title of the institution, rather than its practices.

Similar to the Houston churches’ need for structural repair, in the 2017 case Trinity Lutheran v. Comer, Trinity Lutheran, a church in Missouri, needed a playground resurfacing. When the church applied for the state-sponsored “Scrap Tire Program,” it was denied inclusion, on the grounds of its status as a religious institution. The church then decided to initiate a case on the basis of the Free Exercise clause. The case reached the Supreme Court, which used the case Locke v. Davey as legal precedence. However, the court found that Locke v. Davey was not applicable here, since the newly recycled tires “represented a generally available benefit denied solely on account of religious identity.”[4] The decision to prevent Trinity Lutheran’s access to the resurfacing program did not even consider whether the Church organized non-denominational events open to the wider community; it was made simply based on the title of the organization, and was therefore deemed unconstitutional.

Therefore, since the churches that suffered severe damage after Hurricane Harvey were providing relief services to those of all denominations, FEMA should provide them with disaster funds. Free exercise of religion is compromised when an institution’s status is the only deciding factor for government resources. In 2002 at Seattle Hebrew Academy and in 2005 after Hurricane Katrina, the administration took active steps to help rebuild institutions that provide services to the broader community – even if they were religiously affiliated. Now, the government needs to step forward and provide relief for an actual Church. A step was taken in the right direction in 2013, when the House passed the Federal Disaster Assistance Nonprofit Fairness Act of 2013, which made private nonprofit religious institutions eligible for FEMA aid. It was passed by the House, then sent to the Senate Committee on Homeland Security for further evaluation. As we continue to respond and recover from natural emergencies, the Government should support religious institutions with a “community-first” stance, rather than shun them from emergency aid based on a narrow-minded approach to the Establishment Clause.