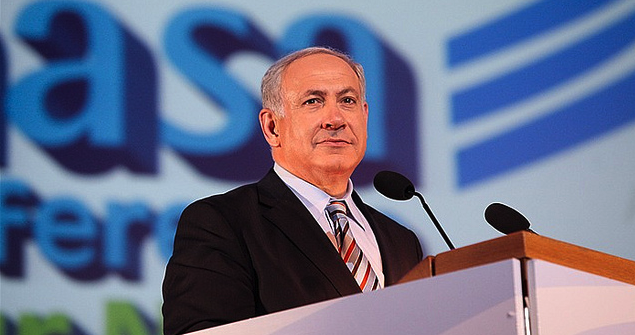 During the climax of 1984’s “Two Minutes Hate,” the image of the despised enemy of the state, the cowardly traitor (and probably the entirely made-up) Emmanuel Goldstein, is replaced with that of the supreme leader— the beloved, worshipped, unparalleled Big Brother.

This infamous scene from George Orwell’s dystopian society is grotesque, violent and extremely emotionally charged. Yet it is this same scene currently flashing across the Israeli social network in reality. The role of Goldstein is being played by an NGO called the “New Israel Fund” (NIF), and the part of Big Brother is, appropriately, occupied by another “BB”— Benjamin “Bibi” Netanyahu, the Israeli Prime Minister.

The book 1984 has experienced quite a rejuvenation of late. Perhaps it is in preparation for the 70th anniversary of its publication, or maybe it is the never-ending war, the terribly partisan political sphere or just a few certain “alternative facts”— but regardless, it is once again relevant for Israeli, as well as American, British and French, politics.

Last week, Israelis awoke to news of the country signing an agreement with the European Union that pertains to illegal immigrants, refugees and asylum seekers. The main decisions reached included Israeli recognition of some 16,000 immigrants as either refugees or legal residents, the deportation of roughly the same amount to Western countries through the UNHCR, and new investments in infrastructure in south Tel Aviv, which has become home to some 35,000 immigrants since 2010.

A good overall agreement for all sides, the deal was perceived as a political victory for the Israeli left (which objects, mostly, to deportations of illegal immigrants, especially from Eritrea and South Sudan) and a loss to Netanyahu’s base– the right, which objects to accommodating any immigrants or refugees. Almost immediately, the left began celebrating the new agreement– and the right, which has stood by Netanyahu even when potential corruption charges surfaced against him, turned on him. He was bashed by pundits, politicians and commenters for giving in to the left and reneging on his promises. Even his most devoted allies left him hanging alone. And surely enough, this worked: less than 24 hours later, Netanyahu retracted the agreement, stating that he had “heard the people’s cry.” Soon thereafter, faced with having to explain this astonishingly acrobatic flip from yes to no, Netanyahu resorted to what he does best: divide and conquer.

He uploaded to Facebook a short statement suggesting the reason for the agreement’s falling apart was in fact an NGO called the New Israel Fund. He alleged that the NGO had caused foreign states to retract their decision to accept deportees from Israel, and called it unpatriotic and anti-Israeli, specifically for its being largely foreign-funded. An NGO worth 300 million, NIS was to blame, he said, for his government’s diplomatic conundrums.

The internet roared. The left mourned. The right, which had attacked Netanyahu, immediately quieted down and began cheering him on again– and then, began aiming its arrows at left-wing activists, calling them traitors, backsliders and foreign agents. The far-right NGO “Im Tirtzu” uploaded– in remarkable proximity to Netanyahu’s statement, by the way– a propaganda video depicting the NIF and its president, Talia Sasson, as foreign agents who operate as a fifth column in Israeli society. Death threats soon ensued.

Netanyahu had done it again: with just two minutes (or so) of pure hate, the tides changed. He was soon adored again as the one and only Big Brother, the “protector of Israel” (as he once professed he wished to be remembered). The masses rallied behind his leadership once more, turning their attention to the made-up demon that is the NIF and the Israeli left in general.

The furious public found in the telescreen an image of Talia Sasson and a logo of the NIF on which to spill its rage, which had climaxed mere seconds before Israel’s own BB reappeared in the form of Netanyahu’s calm and reassuring image.

War is peace, freedom is slavery, ignorance is strength, and only Bibi can lead us.

Ido Dembin is pursuing his master’s degree in Human Rights Studies at Columbia University. He is focusing on the right to free speech in margins of society and the silencing of critical speech and conduct toward governmental policies in contemporary Israel. He is a Tel-Aviv University-educated lawyer (L.L.B.) with background in International Relations. Ido is a blog writer for RightsViews.