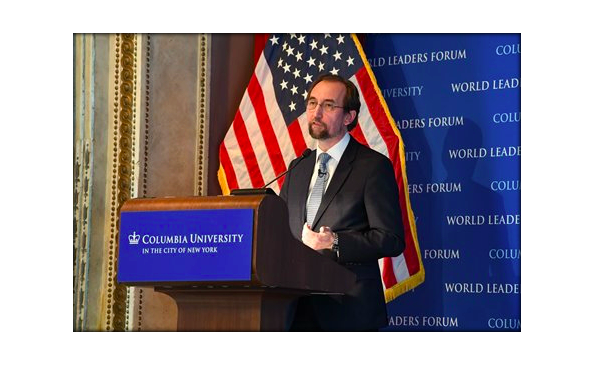 “Human rights faces a stress test today,” Zeid Ra’ad al-Hussein, the United Nations high commissioner for human rights, said during his World Leaders Forum address at Columbia University’s Casa Italiana on November 14. “The approach which seems to be in the ascendent is a blinkered, blind vision of domination, nationalism, and walled-in sovereignty.”

The teatro grew sombre as al-Hussein’s initial quips gave way to his analysis of the current state of human rights— a field in flux, balanced precariously on the back of a technological revolution that poses both risk and opportunity. “The digital universe offers us amazing possibilities for human rights work,” he continued. “We already use satellite imagery and encrypted communications to ensure better monitoring, investigation, and analysis of human rights violations in places where the authorities refuse to give us access.”

Indeed, digital tools have increasingly yielded significant results in the human rights field. In 2015, for example, before-and-after satellite imagery depicted recently disturbed ground that confirmed the existence of a mass grave in Burundi and was used as evidence to implicate authorities in mass killings. Satellite imagery has also been used by NGOs and human rights organizations to expose prison camps in North Korea, the existence of which had long been denied by the government; to trace the locations of attacks by Boko Haram militants in Nigeria; and most recently, to reveal the destruction of 214 villages in Rakhine State linked to the campaign of ethnic cleansing against Rohingya Muslims in Myanmar.

Similarly, human trafficking criminal networks and modern slavery supply chains have been interrupted as a result of data mining, mapping, computational linguistics and advanced analytics. Tech giants like Google have partnered with anti-trafficking organizations to share and analyze data in an effort to identify victims of sexual exploitation. By using data collated from more than 70,000 calls, anti-trafficking organization the Polaris Project was able to identify 8,000 victims in one year alone.

Less technical digital tools have proven themselves just as useful to human rights work. Photos posted to popular social media sites like Facebook and Twitter have been used as key evidence in prosecutions under both national and international laws. For example, last month a Swedish court prosecuted a former Syrian soldier for war crimes largely on the basis of a photograph he had posted to Facebook, brought to the attention of the authorities by other Syrian refugees who had seen the graphic image on social media.

The high commissioner highlighted that digital technology can be leveraged beyond the realm of human rights and used to encourage public participation in social justice initiatives more broadly. As an example, he pointed to the recent online public consultations used to formulate the U.N.’s set of global Sustainable Development Goals. Common methods used to restrict rights and freedoms include the censorship of online opinion and expression, blocking access to information, and closely monitoring digital activity. Countries including the United Arab Emirates and Ethiopia have hired programmers to develop hacking and surveillance tools and frequently use commercial spyware to target dissidents, monitoring their messages, calls, and whereabouts. Moroccan journalists have been secretly surveilled by government-deployed malware; a human rights group in Bahrain has been targeted with spyware sold to the Bahraini government by a firm in the U.K.; and the United States government collects vast amounts of metadata through a wide variety of surveillance programs, most notably the NSA. Egypt has banned dozens of websites in a growing censorship crackdown, while China employs some 40,000 “Internet censors” to block and remove any content critical of the Communist Party and the Chinese government. Globally, 27 percent of all internet users live in countries where people have been arrested for publishing, sharing, or merely “liking” content on Facebook, and authorities in 38 countries made arrests based on social media posts over the past year, according to the World Economic Forum.

Digital surveillance and online censorship threaten several fundamental human rights and the core freedoms meant to underpin liberal democracies. First, the right to privacy is explicitly enshrined in the International Covenant on Civil and Political Rights (ICCPR), ratified by 167 states to date, which says that “no one shall be subjected to arbitrary or unlawful interference with his or her privacy, family, home or correspondence.” Second, free speech is protected under Article 19(1) of the ICCPR, which states that “Everyone shall have the right to hold opinions without interference,” while under Article 19(2), “Everyone shall have the right to freedom of expression; this right shall include the freedom to seek, receive and impart information and ideas of all kinds…through the media of his choice.” The same rights to freedom of opinion, expression, privacy, and information are protected by similar wording in the Universal Declaration of Human Rights.

“Any measures to restrict access to, block, or remove content from Internet sites on the part of governments wielding counterterrorism policies or any other reason must comply with international human rights standards,” the high commissioner told Columbia students at the World Leaders Forum event. “They should be proportionate to the threat, demonstrably necessary in their most precise details, as minimally restrictive as possible, supervised by public bodies, and defined by laws derived from public consultation.” Where, one might wonder, does this leave private tech companies? Companies like Google, Facebook, and Apple are put under severe pressure as governments increasingly demand that they regulate content within certain jurisdictions. Apple’s recent decision to disable access to VPN services in its Chinese App Store was criticized as making the company complicit with Chinese censorship, while both U.S. and U.K. spy agencies have come under fire for tapping undersea fiber optic cables to harvest data for surveillance purposes, a practice enabled by laws that require telecommunications companies to comply with domestic and international surveillance requests. India, Pakistan, Turkey and Russia top the list of governments that most frequently request sites like Twitter and Facebook remove “blasphemous content” and provide user account information— requests that are usually quietly complied with.

“When a company supplies data to a state in contravention of the right to privacy under international law, that company clearly risks becoming complicit in human rights abuses,” al-Hussein argued. “The rights which we hold to be inalienable offline must also be protected online.”

With significant advances in digital technologies like artificial intelligence and the increasing commercialization of software that uses biometric data including fingerprints, face, voice and iris recognition, a vast number of new problems will face the field of human rights. In creating this digital universe, the consequences of which are largely unknown and often unpredictable, the high commissioner warns that human rights and needs must be a central focus. With great power comes great responsibility— as digital power grows, so too does our responsibility to protect the fundamental rights and freedoms of humankind.