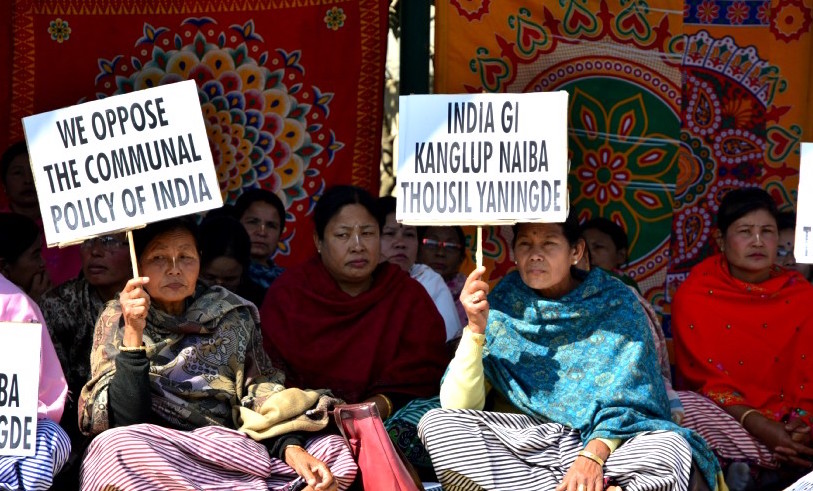 The following is an opinion piece authored by ISHR visiting scholar and activist, Binalakshmi Nepram.

“When you single out any particular group of people for secondary citizenship status, that’s a violation of basic human rights” ~ Jimmy Carter, Former US President & Nobel Peace Laureate

History show us that in the 1500s, an estimated 10 million plus Indigenous people lived on land now known as the United States of America (US). In 1830, the US passed the Federal Indian Removal Act, which forced thousands of Indigenous people out of their homelands. For hundreds of years, conflicts with colonizers, introduction of diseases, atrocities and discriminatory policies devastated the Indigenous People of North America. It is estimated that over 9 million Indigenous People died during this time. In the present day, many Indigenous Peoples in the US now live in areas designated as “Reservations.”

The story of what happened to Indigenous People in the US is the story which many Indigenous People living in what is currently known as “Northeast Region of India” are now facing–a fear of becoming outsiders on their own land. Protesters against the Citizenship Amendment Bill

Recently, the Indigenous areas of the Northeast Region of India were rocked by a series of protests over the Citizenship (Amendment) Bill that was tabled in the Indian Parliament on January 8, 2019 by the BJP Government of India. The region with the highest concentration of protests against the bill is inhabited by 272 Indigenous communities speaking over 400 languages. It is also home to one of Asia’s longest running armed conflicts.

On top of seven decades of violence, the Indigenous peoples of Northeast Region of India are wary of the newly minted Citizenship Amendment Bill as the Bill sets to amend the Indian Citizenship Act of 1955 to make it illegal for Hindu, Sikh, Buddhist, Jain, Parsi and Christian migrants from Afghanistan, Bangladesh and Pakistan eligible for Indian citizenship. The Bill also reduces the 11 year requirement of citizenship to 6 years. Sources say that 2 million people (20 lakhs), mostly belonging to the Hindu religion from three countries could potentially be granted Indian citizenship as a result of this.

At around the same time, another initiative has been taking place in Assam, Northeast India called the “National Register of Citizens” (NRC). The NRC is a list of  all Indian citizens of Assam. A Supreme Court order in 2013 began its process of implementation. Under this initiative, around 4 million people (40 lakhs) in the state were found to be stateless and without a nation due to lack of proper documentation that could prove their citizenship. Most of them were of Muslim faith. A group of women protesters in Northeast India

A closer study of the histories of the world show that what is currently being attempted in India with Citizenship Amendment Bill has also been done in other parts of the world. Take the case of “Project IC,” which is the name used to describe the allegation of systematic granting of citizenship to immigrants in the state Sabah, Malaysia. Sabah was a multiracial state with no clear majority race. Some claim the government’s aim with this “Project” was to alter the demographic pattern of Sabah to make it favorable to the ruling government and certain political parties by changing the electoral voting patterns.

The project reportedly began around the 1990s. Some years later, the population of the Kadazan-Dusun Peoples was reduced to 17% while non-citizens rose to 25%.  It was reported that Harris Salleh, a political leader, admitted to planning to change the demography of Sabah in favor of a specific religious community. During the Royal Commission of Inquiry on Illegal Immigrants in Sabah in 2013, Harris Salleh justified his actions by stating that the granting of citizenship to refugees was done per the Federal Constitution. He further stated that Malaysia’s first prime minister, Tunku Abdul Rahman had announced in the 1970s that certain refugees belonging to a certain “religious” group could stay in Malaysia.

There are many parallels between the Northeast Indian introduction of the Citizenship Amendment Bill and others  that have been introduced historically around the globe, such as the United States Indian Removal Act of 1830 “Project IC” in Malaysia and the population engineering that happened in Tripura.

The UN Declaration on the Rights of Indigenous Peoples states that States must obtain the pre, prior, and informed consent of Indigenous Peoples before making any political changes that will affect them. The Citizenship Amendment Bill would affect the cultural and linguistic existence of the Indigenous peoples of the region. However, although 90% of the current population of Northeast India is Indigenous, India has yet to sign the Declaration to demonstrate their commitment to protect the Northeast Peoples. India also has not signed the 1951 UN Refugee Convention, which is a binding international agreement enforceable by states and the International community.

It is likely that the Citizenship Amendment bill would create politically motivated divisions between the communities, regions, and ethnic groups of India, rather than focus on listening to the many concerns and voices of the people residing in the territory.

Binalakshmi (Bina) Nepram is an internationally renowned award winning scholar and activist who was a Visiting Scholar at Columbia University’s Institute for Study of Human Rights 2017-2018. Nepram is the founder of Manipur Women Gun Survivor Network and Northeast India Women Initiative for Peace and currently convener of The Global Alliance on Indigenous Peoples, Gender Justice and Peace. She was recently awarded 2018 Anna Politskovaya Award along with Nobel Laureate from Belarus, Svetlana Alexievich