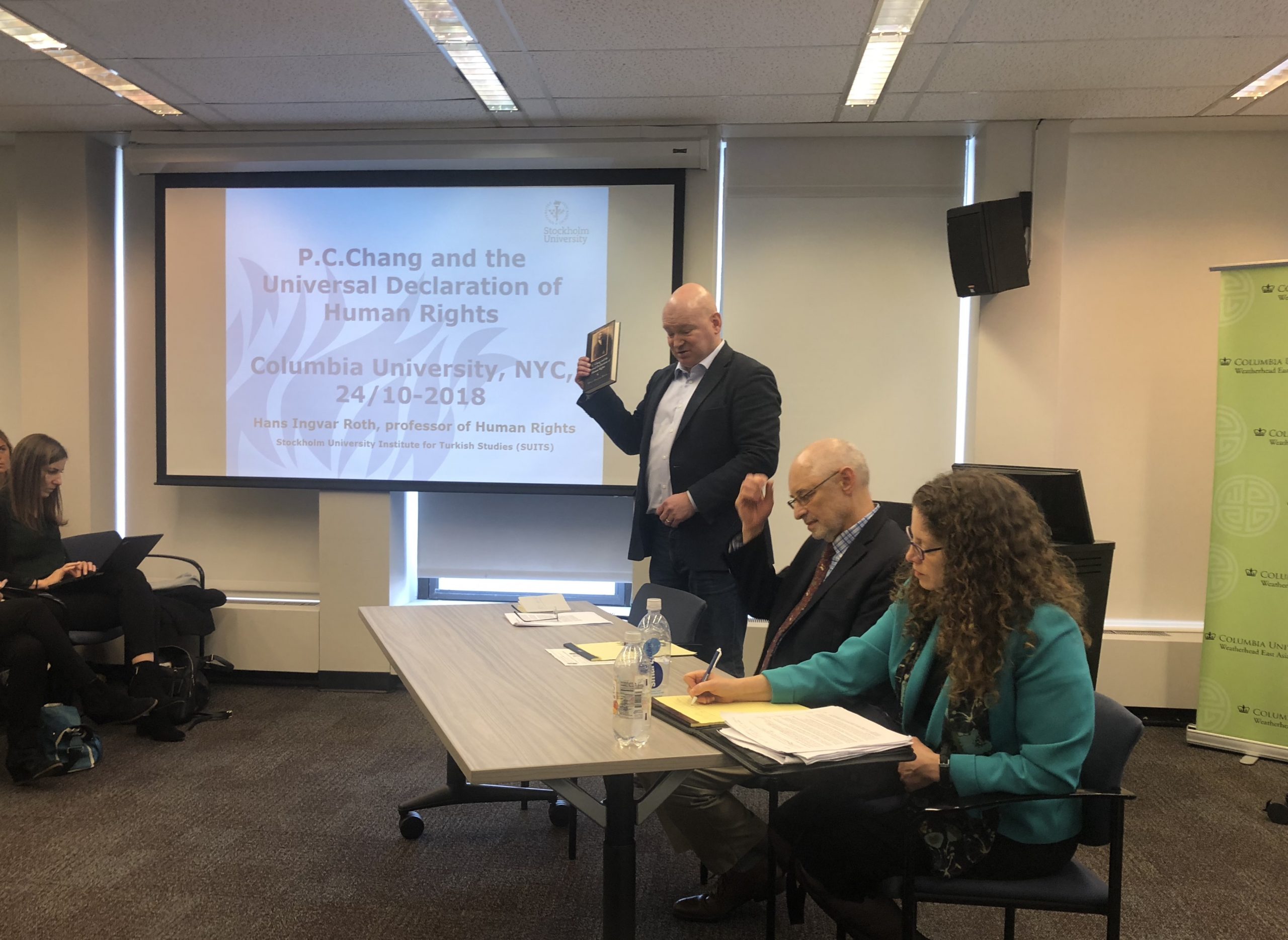 P.C. Chang and the Universal Declaration of Human Rights

On October 24, 2018, United Nations Special Rapporteur in the field of Cultural Rights, Professor Karima Bennoune joined Professor Hans Ingvar Roth to celebrate his new book P.C. Chang and The Universal Declaration of Human Rights, marking the 70th anniversary of the UDHR. Roth has dedicated over four years to create the first intellectual biography of Peng Chun Chang, a “multifaceted talent and one of the most important drafters of the UDHR.” Chang is a Columbia University alumni and Roth acknowledged that “we are at Columbia University, where Chang studied, and this year is the 70th anniversary of the UDHR, and I think never before has it been more important to celebrate this great book in history.” Event moderator Professor Andrew Nathan introduced both speakers to a full room of fifty like-minded academics.

With only thirty minutes, Roth delivered an exceptional speech on the role of P.C. Chang in drafting the UDHR and Chang’s influence, making it a truly intercultural document. At the beginning of his speech, Roth acknowledged several threats to human rights culture but stated that “we should all remember the enormous achievement of the drafters and those that were involved with the creation of the UDHR. They had a small opportunity… but they managed to carve out a fantastic document. One of the greatest documents of history.” In a time when human rights are in danger, Roth believes that the UDHR is imperative because “all human beings are created equal and should be seen with caution and reason, and this was very important to justify in writing.”

Evidently, in order to understand the importance of the UDHR today, it is imperative to commemorate and recognize the drafters that created this critical document. Focusing on Chang, in particular, Roth argued that Chang was one of the most important drafters of the UDHR. Chang was more or less present during the whole political process, where he influenced the overall character of the UDHR, including key articles and concepts, the structure, literary style and ideas about justification and implementation of the document. Notably, Chinese-born Chang recognized the importance of culture, where he “stressed that this document was an offspring of several ethnic traditions around the world.” By going against the myth that the UDHR is a purely Western document, Roth stated that “[the UDHR] wasn’t just a Western liberal document. Chang came from China and was trying to find counterparts to human rights in Confucian philosophy, for example.”

In addition, to celebrate Roth’s new book, Professor Bennoune discussed her report “Universality, Cultural Diversity and Cultural Rights,” which outlined the mutually reinforcing principles of universality and cultural diversity as well as an important annex towards the global history of the UDHR. To begin, Bennoune stated, “[my report] intersects very nicely with Professor Roth’s important book, and I really thank him for writing this book because it helps us excavate the history of human rights and the UDHR – the history that we don’t tell often enough.” Bennoune believes that the UDHR plays a critical role in creating the legal grounding of universality: “Universality is the idea that there is no such thing as a second-class human being. There is no such thing as a relative human being.” It is, like Roth argued, that human beings have equal inherent human rights simply by virtue of being human. However, the idea of universality is being attacked by politics, non-state actors and academia by endorsing the idea of cultural relativism. As the Special Rapporteur in the field of cultural rights,  Bennoune also was equipped to make statements regarding the difference between cultural rights and cultural relativism. “Cultural rights, which are very positive and part of human rights; cultural diversity, which is positive for human rights; and cultural relativism, which is a very different concept, which rather than amplifies rights, seeks to diminish them and take them away in the name of culture,” she said.

In order to address the overwhelming attacks to universality and cultural diversity, Bennoune believes that “we need to lay a foundational renewal of universality… going back and understanding where this concept came from and who were the people who helped codify it and why they thought it was important for us…people from various cultures and religions were involved in the writing of this text and it voiced a concern for cultural belonging and the importance of culture for the wellbeing of the individual person and was a product of intercultural strategies and dialogue.”

Throughout the event, one of Roth’s presumed goals was to make Chang and other UDHR drafters “household names.” Evidently, Roth’s in-depth intellectual biography on P.C. Chang was a positive step towards educating the public on the UDHR and making P.C. Chang an important figure in the human rights discourse.