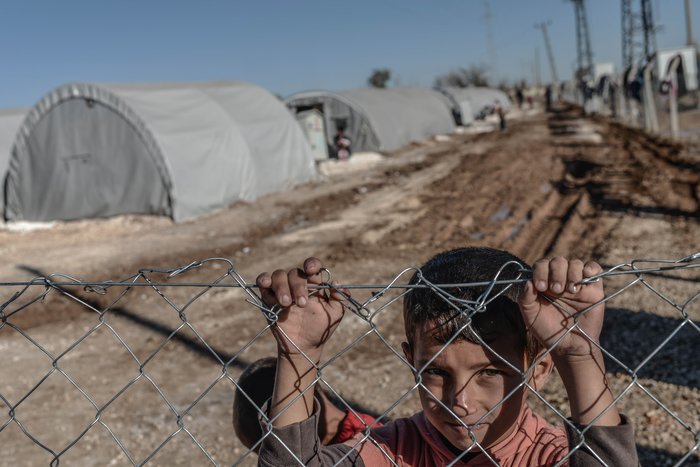 Posted by Genevieve Zingg
· No Comments

By Genevieve Zingg, editor of RightsViews and an M.A. student in Human Rights Studies at Columbia University

A potential solution to the looming issue of climate migration has recently been put forward by a commission of academic and policy experts who spent the last two years developing the Model International Mobility Convention. The proposed framework establishes the minimum rights afforded to all people who cross state borders, with special rights afforded to forced migrants, refugees, migrant victims of trafficking and migrants stranded in crisis situations.

The Mobility Convention broadens the scope of international protection by recognizing what it terms “forced migrants.” Climate migrants lacking legal grounds for asylum under the 1951 Convention would qualify for protection under the forced migrant definition it advances.

“We were looking for rules that will really improve protections for forced migrants and refugees,” says Michael Doyle, who helped develop the Model International Mobility Convention as the director of the Columbia Global Policy Initiative and co-director of its International Migration project. “The moral claims that they make on us— environmental reasons— are not that different from the grounds of the 1951 Convention, which are just too narrow,” he said. “We have no expectation that Trump, Viktor Orbán in Hungary or Andrzej Duda in Poland will be interested. But this is a long game, so we’re visiting universities and NGOs to explain the logic behind this highly comprehensive convention that we’ve prepared.”

Doyle rattles off an enviable list of recently visited cities— Nairobi, Mumbai, Paris, London, Ottawa, Vancouver, Barcelona, São Paulo— where he’s travelled to spread the word about the convention. “The hope is to build a valuable network of alliances, building the kind of coalition that will get the attention of friends in government, a sufficiently significant number of them that this prospect might be established,” he explained.

He cites the landmark Mine Ban Treaty, signed in Ottawa in 1997, as exemplifying the power of academic and civil society organizations mobilized in pursuit of a common goal.

The Mobility Convention proposes key changes to international migration, for instance in terms of responsibility-sharing. “The current principle is responsibility by proximity,” Doyle says, referencing the disproportionate impacts of the Syrian conflict on neighboring countries Turkey, Lebanon, and Jordan. “84 percent of refugees live in developing countries nearby, and that is not sustainable.” On the outskirts of Dadaab refugee camp, a family gathers sticks and branches for firewood and shelter. The carcasses of animals which have perished in the drought are strewn across the desert. //  Andy Hall // Oxfam East Africa, 2011

According to Susan Martin, founder of the Institute for the Study of International Migration at the Georgetown School of Foreign Service and previous executive director of the U.S. Commission on Immigration Reform, the vast majority of climate migrants will be internally displaced, or will travel cross-border to a neighboring country that isn’t much better off than they are.

“Some are able to use their social networks and social capital, their skills and financial resources to move, but the most highly vulnerable people don’t have any of that capital – and if they can move, it’s not very far from where they’re already endangered,” she said.

“Responsibility is nominally determined by your capacity to exist, but this top-down quota system fell flat in Europe,” Doyle explained. “We’re proposing using naming and shaming against a set of standards to encourage better behavior.”

The proposed system would have UNHCR annually identify refugee costs and the number of refugees needing to be resettled worldwide. The agency would then examine country population, GDP, past refugee loads and so on in order to determine a proportionate quota system based on each country’s capacity. Countries would be expected to make voluntary pledges in terms of dollars and resettlement based on the agency’s calculation. To create a naming-and-shaming incentive, UNHCR would publish a report at the end of each year revealing whether each country lived up to its commitments and resettled its fair share of refugees according to its socioeconomic capacity.

The political tensions that come with responsibility-sharing could be dramatically lessened if we start now. According to Martin, the key is building resilience early by focusing on increasing financial resources and human capital. Australia and New Zealand, for example, have begun admitting people in small numbers who can form the backbone of a diaspora for later climate migrants. Seasonal programs providing supplementary income for farmers and fishers affected by environmental impacts can similarly help raise financial and educational resources.

“This way, they’ll be better able to meet the standards of immigration in other countries rather than being treated as an emergency,” Martin said.

“It’s much better to help people qualify for legal immigration instead of responding to it as a crisis,” Martin emphasized.

“That’s what happened with the Syrian crisis – European countries, including those in Eastern Europe, could have easily absorbed those numbers.”

Governments have many incentives to prepare for climate migration. Climate impacts will exacerbate conflict, and failure to prepare legal avenues for displaced persons will only further increase the risks of regional destabilization. For example, climate-related conditions, particularly droughts, have driven conflicts in Syria, Yemen, and contributed to the outbreak of the Arab Spring across several countries in the Middle East and North Africa in 2010. “If no attention is paid and no relevant action is taken to resolve conflicts, you have thousands of refugees in the region with no solution and no prospects for peace to allow voluntary return,” Bertrand warned, highlighting that refugees now make up 25 percent of Lebanon’s population. “Those very numbers can destabilize the destination country – and these situations can last 15, 20 years.”

Bertrand pointed to Afghanistan to illustrate how protracted refugee situations can be. He was sent to Kabul in 1988 to repatriate Afghans after the departure of Soviet forces, as legal arrangements were made for UNHCR to open a repatriation office and ensure that displaced Afghans could return home. “But it’s been 30 years and there are still significant numbers in Pakistan that have not yet returned,” he explained, “and the situation is still triggering new movements.”

Second, contrary to right-wing rhetoric, immigrants actually have positive economic impacts on host countries. Doyle urges the implementation of labor-based migration. “Why not identify where a country is likely to experience shortages and open up visas for this?” he asked, pointing to Canada and Australia, two countries that have already started doing this.“Legal documentation is a win-win all around: design a better system, say, matching recent graduates with openings. There will be a large demand in many areas.”

Martin similarly highlights that many immigrants have the skills needed for the labor force in highly developed countries, especially when considering the implications of aging baby boomers. The reality is that immigrants are not often competing with natives for jobs.

To convince people opposed to migration,  we need to focus on making migration in urgent circumstances a norm. Looking at the populist boom in North America and Western Europe, Martin highlighted that framing migration solely in terms of international law and international frameworks can feel elitist, as it excludes large swaths of society who have been excluded from these types of issues and discussions. Rather than appearing as hot topics during sudden times of unrest, concepts of migration and displacement should be promoted at an earlier stage so people of all strata, education levels and belief systems grow up understanding the phenomenon to be natural and normal. Doyle urges students to campaign in the human rights sense of climate migration, lobbying governments, forming campaigns, and mobilizing in support of low-hanging policy fruit like family reunification. He suggests looking to cities as bases of support.

The private sector, too, presents a key partnership opportunity. Companies like Ikea, Google, and Uniqlo all have corporate social responsibility initiatives that can be mobilized in support of more adept immigration policies.

Over the next ten years, Doyle hopes that civil society and academia will mobilize in support of the Mobility Convention, urging cities and governments to adapt immigration policies and offer stronger protections to both conflict and climate-driven migrants.

“By 2028, we hope to have formed a coalition,” Doyle says. “A coalition that will see the value of bringing international law up to date.”

Genevieve Zingg is currently pursuing her Master’s degree in Human Rights Studies at Columbia University, focusing on human rights in the context of armed conflict, counterterrorism and national security. She is interested in refugees and migration, foreign policy and international politics, international criminal and humanitarian law, and intersectional issues of race and gender. She holds a B.A. (Hons.) from the University of Toronto and has professional experience working in Geneva, Athens, Paris, Brussels and Toronto. Connect with her on Twitter @GenZingg. She is editor of RightsViews.