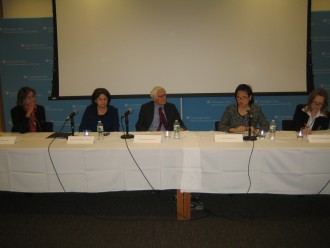 “Justice is given to whomever is louder”

Penelopa Gjurchilova, a former Macedonian diplomat and visiting scholar at the Institute for the Study of Human Rights (ISHR) quoted this popular Macedonian proverb during her opening remarks at a symposium entitled “Foreign Policy Makeover: Women’s Roles and Rights in Diplomacy,” held on November 14, 2013 at Columbia University.

ISHR and the Gender and Public Policy Specialization at the School of International and Public Affairs (SIPA) hosted this symposium, consisting of two panels of former and current ambassadors and foreign policy professionals from around the world.  The panelists discussed personal experiences within the field of diplomacy and shared their professional perspectives on the issue of including women’s rights in diplomatic affairs. Chaired by Yasmine Ergas, Associate Director of ISHR and Director of the Gender and Public Policy Specialization at SIPA, the symposium created a unique opportunity for women and men to be heard on the role of gender and women’s rights in foreign policy. Penelopa Gjurchilova began the symposium with a call to younger generations to be guided by principles of equity and equality, which other panelists echoed in their discussions.  She pointed out that although the status of women in diplomacy is improving, many countries have not seen progress on this issue, which is not only a matter of human rights but is essential in maintaining peaceful international relations and equality worldwide.

The distinguished speakers spoke about how women in diplomacy tend to face particularly difficult challenges, not least among which include existing stereotypes regarding traditional women’s roles and the always-in-conflict tug of war between family life and career.  There are, however, ways for women to improve their experiences in the diplomatic corps.  Women must communicate with each other, exchange ideas, and form networks within which they can help each other as they enter and rise through the diplomatic ranks.  As more women achieve higher-level diplomatic positions, stereotypes break down and access to more prestigious positions increases. Women in diplomacy in the past, and even now, are the pioneers, and despite the difficulty of that position, it is their responsibility to make that workforce easier for women in the future.

Also voiced throughout the panel discussions was the conviction that the engagement of women in diplomacy absolutely does not mean the disengagement of men. Gender equality is especially necessary for peace processes, or lasting peace will be impossible to achieve.   Creating opportunities for women in diplomacy and post-conflict processes will take a considerable amount of work, and mostly from women. For example, the United Nations Women branch was established only when a group of female ambassadors got together, lobbied for its existence, and put massive effort into its creation. Another example of proactive women came from Ambassador John Hirsch, who explained that women played an immense role in ending a junta rule in Sierra Leone and in instituting elections.  They became role models for other nations, and we must remember that women are integral to the processes of peace and reconciliation.

Another crucial point, which became a topic of discussion in the second panel, was the lack of governments’ political commitment to putting gender issues on their agendas.  While an awareness of gender issues in governments is important, there also must be the political will to do something about them, without which nothing can truly be accomplished. In order to achieve change, governments must budget for gender issues and ensure that the structures in place promote equality.  The individual is very important, but if the correct structures are not in place, there is only so far women can go. Leadership is terribly important as well, as H.E. Mrs. Tine Mørch Smith, Deputy Permanent Representative of Norway to the UN, highlighted. A whole generation of girls in Norway was empowered by the female Prime Minister at the time, and this played an immense role in the ambassador’s aspirations to begin a career in diplomacy as well as her access to higher-level positions.

Carne Ross, Executive Director of Independent Diplomat, presented a powerful opinion on the issue of gender itself.  Of utmost importance is “de-gendering.” As long as diplomacy remains infused with a male-dominated environment, made up of zero sum negotiations, heavy drinking, long hours, and other traditionally male workplace characterizations, it will be challenging for women to rise in the ranks.  Hiring more women, though it sounds like a solution, cannot alone address the problem.  A systematic analysis into the political and institutional structures needs to take place.  Diplomacy, he confidently stated, is a gendered archetype in itself.  Win-lose modeling takes precedence over a consensus-seeking model, hard issues are valued over “soft” issues, empiricism is valued over emotion, and there is a priority to security over all else.  Complete with a historical notion of hierarchy, the diplomatic corps is male-oriented, as are states.  Therefore, global issues will not be solved by states at all, but rather, by a mass movement of men and women who are not bound within a hierarchical system.

Mr. Ross’s bold views on de-gendering were appreciated; it was also pointed out that we must talk about the differentiation of experiences between men and women, maintaining two perspectives but being careful not to recreate gender dichotomies.  We must, Ms. Ergas mentioned, move beyond the question of gender and find the next step.

The symposium raised a lot of important issues, shining a light on gender inequality in diplomacy and opening the door for further discussion and analysis of gender questions. This symposium has set the stage, and now we must work together to find, analyze, and take that next step so that we, eventually, do not have to talk about gender at all.

Jenna Wallace is an M.A. candidate in the Columbia University Human Rights Studies program. She is specializing in indigenous women’s rights, and is looking forward to a robust career in international human rights advocacy.