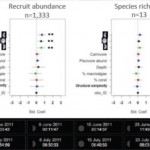 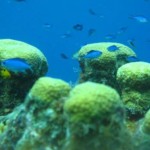 Coral reefs are undergoing a number of detrimental changes as a result of increasing ocean temperatures and acidification and nutrient inputs, including a decline in coral cover and a concomitant rise in the cover of ephemeral algae.

Nilou investigated patterns of coral reef fish recruitment at a number of sites within the Glover’s Reef Atoll World Heritage area in Belize, and related these to site characteristics such as coral and algal cover, reef complexity, lunar cycle and conspecific abundance. She expected to find a negative relationship between macroalgal cover and recruitment, but instead found a complex set of results suggesting that different species of coral reef fish respond to different cues within the reef. Macroalgal cover also showed a low level of variation across sites, suggesting that, like most Caribbean reefs, Glover’s reef may be already at a low level of reef health.