Cyberspace and the Rise of the BRICS 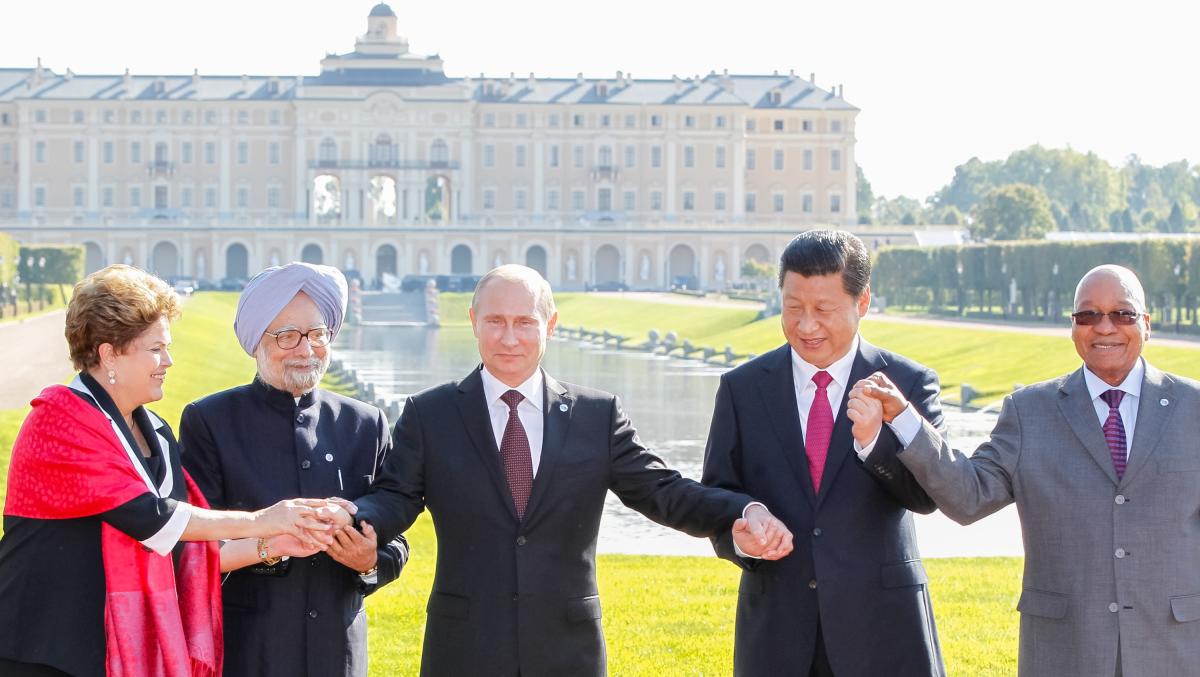 BRICS leaders. From left: Brazil’s Dilma Rousseff, India’s Pranab Mukherjee, Russia’s Vladimir Putin,
China’s Xi Jinping, South Africa’s Jacob Zuma. Photo credit: Wikimedia Commons.
Abstract: Over the last decade, rising powers emerged as powerful contestants of U.S. leadership in cyberspace. However, while their joint rise has led to growing institutionalized cooperation among them, their contestation of the U.S.’s role in the cyber arena has varied greatly, hinging heavily on each state’s political system.
The future of the Internet is at a critical juncture. Leaked information on the U.S. National Security Agency’s (NSA) surveillance programs has not only made headlines around the world, but it has also impacted global politics. Brazil’s president Dilma Rousseff most recently took the U.S. government to task at a UN summit this September, and China’s state-backed media called it the “biggest villain in our age.” [1] [2]
The year 2013 is a pivotal moment for the Internet as cyberspace becomes an increasingly contested area. The economic and political stakes involved have transformed cyberspace from an issue of low to high-level politics, and the BRICS (Brazil, Russia, India, China, and South Africa) countries will play a critical role in determining its outcome.[3]
While we wait for the future to unfold, the recent developments present an opportune moment to shed some light on the BRICS’ past behavior with respect to cyber policy. Few dispute that the U.S. has been the global leader in both enforcing cyber policy and fostering the evolution of the Internet. As to cyber policy, the world’s rising powers—driven by their own growing capabilities and the increasing stakes at hand—have begun to question that leadership. This contestation has led analysts to proclaim the start of “cyber wars,” “battle over the soul of the Internet,” and most recently that “the net is finished as a global network.”[4] [5] In view of this, it becomes apparent that there are significant differences among the BRICS’ cyber policies.
A better understanding of these nuances will help evaluate how the recent events will structure future discussions.

Conditions for contesting the status quo in cyberspace

Emerging details on the NSA’s wide-reaching surveillance programs not only shed light on the role private companies play in the cyber landscape, but also on the role of the state in shaping the Internet. The existing Internet governance regime has been framed as a “multi-stakeholder” model, since it consists of governments, private companies, and non-governmental organizations without an inherent hierarchy among the three.[6]
The U.S. government’s leadership role in cyberspace, however, presents an anomaly to the posited multi-stakeholder model. And as such, the U.S. position is now a focus of contestation.
Two key dimensions of this contestation are Internet governance and cyber-security. When it comes to Internet governance, contestation strategies not only focus on existing rules, but also—to borrow the chessboard analogy popularized by Joseph Nye—on the game itself.[7] For land, sea, air, and space, the design of each chessboard is already determined and contestation is limited to changing the rules of the game. In cyberspace, however, the gameboard itself can be changed by altering the physical infrastructure, the protocol, or the content layers to affect the actors and their actions.
With respect to cyber-security, the Internet has become an additional battle space, and world military leaders have taken note. U.S. Deputy Secretary of Defense, William J. Lynn III, for example, declared cyberspace a new domain of warfare in 2010.[8] Since then, it has become increasingly evident that cyberspace is a medium through which military and non-military, state and non-state groups can target and carry out attacks on physical infrastructures.
The contestation over cyber-security and modern surveillance systems also raises the age-old question of how to balance freedom and security, but in the digital context.

Our analysis suggests that compared to a decade ago, IBSA member states are increasingly in a position to challenge U.S. Internet hegemony as they enter military cyber-security cooperation agreements with the United States. The emerging multi-polar cyber landscape is further illustrated in the IBSA countries’ hedging and balancing strategies as they respond to external and internal pressures.
Between cyber-security understandings with the U.S. and the broad Sino-Russian campaign for an international code of conduct on information security, these “swing states” are also facing powerful domestic movements pushing for an open and free Internet that can only exist in a democratic society.
What remains unclear is how recent events will affect these trends. Will IBSA now swing more in the direction of Russia and China or will the Sino-Russian imperatives on information security not affect their relationships with the U.S. in the long-term? The outcome of the struggle over Internet governance and cyber-security between BRICS member states will to a large extent determine the future of cyberspace, and with it, shape a fundamental element of the future world order.