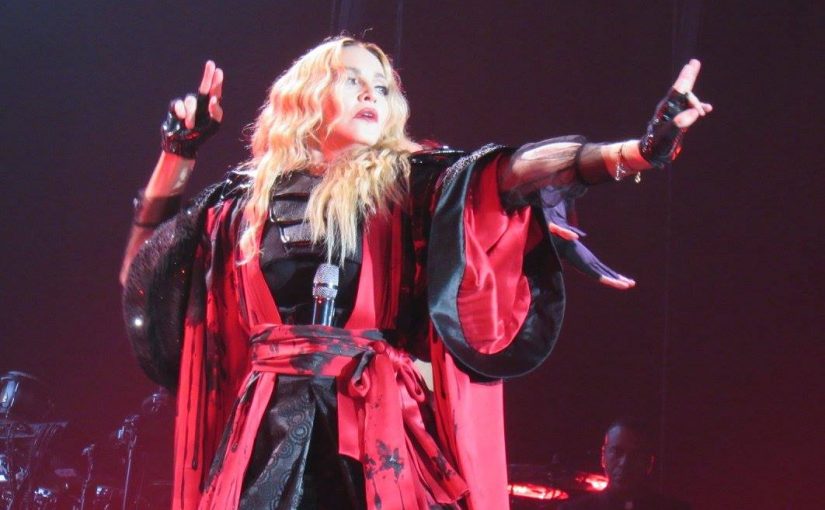 It’s Day 28 of the COVID19 Lock-Down, so I decided to have fun by sharing my Top 10 Madonna Songs of All Time! She’s the Queen of Pop who’s provided the soundtrack to my life, after all … here we go:

10. This Used to Be My Playground
This Used to be My Playground is the theme song for Madonna’s hit movie A League of Their Own. This emotional, nostalgic ballad topped the charts back in 1992 and makes me wish Madonna would do more soundtrack songs.

Key lyric: Don’t hold on to the past, well that’s too much to ask

9. Justify My Love
Sexy sex sex! Justify My Love is hands-down one of the sexiest songs ever recorded. The video was so hot it got banned by MTV. That didn’t stop the song from topping the charts – in fact, I’m sure it helped.

Key lyric: I want to run naked in a rainstorm, make love in a train, cross-country

8. Deeper and Deeper
Deeper and Deeper is the second single from Madonna’s controversial Erotica album, released in late 1992. It’s a groovy dance tune that some argue is about a young man coming to terms with his homosexuality. Towards the end, it has a small throwback to her mega-hit Vogue. The live performances of this song never disappoint – case in point: the slowed-down ballad version performed during the Re-Invention Tour.

Key lyric: But my love is alive and I’m never going to hide it again

7. Easy Ride
Though it was never released as a single, Easy Ride remains one of my favorite Madonna songs. It’s the closing track from her criminally underrated American Life album. The classic strings in this song are amazing. Everything about the song leaves me wanting more.

Key lyric: I want to let go of all disappointment that’s waiting for me

6. Bad Girl
Released as the third single from her controversial Erotica album in 1993, Bad Girl is a complicated – though sophisticated – track that deals with a woman coming to terms with her reckless behavior after the end of a relationship. The video for this song is probably Madonna’s best – it’s certainly her most cinematic. Did you know David Fincher directed the clip and that Christopher Walken appears as the angel? Madonna performed this powerful ballad only once, on Saturday Night Live in 1993. I’m still waiting for her to include it on the setlist for one of her live shows.

Key lyric: I fall apart every time you hand your heart out to me

5. Like a Prayer
Like a Prayer is Madonna at her creative best – the blend of sex and religion was pure ecstasy and unlike anything other big pop stars were exploring at the time. Remember the video with the burning crosses? It was super controversial, even as the song topped charts around the world. It remains a favorite in her live shows.

Key lyric: Life is a mystery, everyone must stand alone

4. Into the Groove
What more can be said about this pulsing dance hit from Madonna’s first big movie, Desperately Seeking Susan? Into the Groove has stood the test of time – no one can resist Madonna’s call to the dance floor. If this had been released as an official single, there’s no doubt it would have been a no.1 smash, but it came packaged as the b-side to Angel from her Like a Virgin album instead.

Key lyric: Music can be such a revelation

3. Live to Tell
Playing double duty as the lead single from her smash True Blue record and At Close Range soundtrack standout, Live to Tell introduced the world to a more mature, introspective Madonna – and topped the charts! Years later during her Confessions Tour, Madonna performed Live to Tell while hanging from a cross with a crown of thorns upon her head .. she’ll never lose her talent for pushing all the right buttons!

Key lyric: The truth is never far behind

2. Secret
In a major departure in sound for Madonna, Secret gives us a perfect blend of Pop and R&B. Upon its release as the lead single from her understated Bedtime Stories album, Secret sounded like no other song in her vast catalogue. Once again, the Queen of Pop managed to reinvent both herself and her sound with this smooth, groovy hit.

Key lyric: Happiness lies in your own hand

1. Frozen
This is the song that introduced a whole new sound for Madonna back in 1998, serving as the lead single from her Ray of Light album, an electronic masterpiece.  The mid-tempo ballad is dramatic and breathtaking – those drums! that cinematic buildup!  It peaked at no.2 on the Billboard Hot 100 and lives on as a classic Madonna track. The performance of Frozen in her most recent Madame X Tour is the highlight of the show. It’s pure perfection – watching Madonna sing the song while her daughter Lola is dancing on the giant screen around her is so simple, yet so effective.

Key lyric: You’re frozen, when your heart’s not open

Agree? Disagree? Let me know in the comments below.
What are your top 10 favorite Madonna songs of all time?