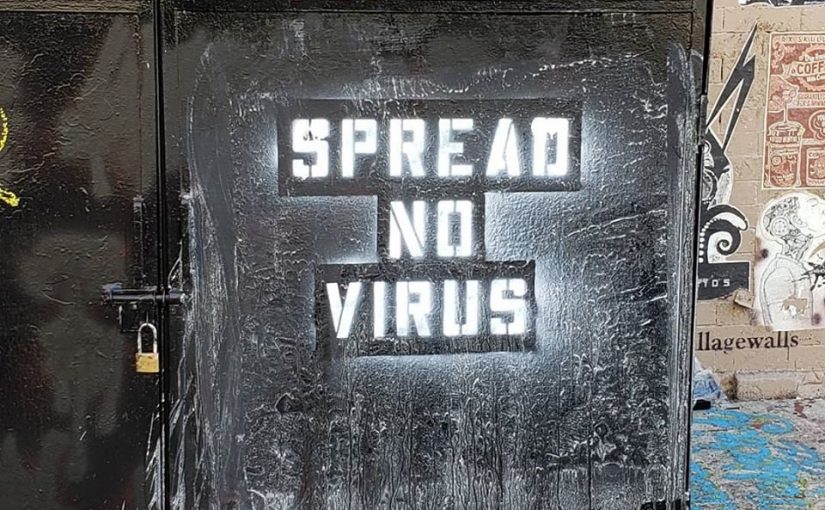 I live in the East Village, New York, and, like most of the country, we’re currently on lock down due to the COVID-19 pandemic. I’m sharing some entertainment recommendations for everyone who’s stuck inside like me. Let me know what you think and feel free to offer your own suggestions in the comments below – and please stay safe and healthy!

Television
Tiger King – I can’t enthusiastically recommend this Netflix Quarantine-and-Chill docuseries hit, mostly because it’s more trash TV than thoughtful documentary. If you’re a fan of that genre (think The Bachelor, The Real Housewives of whatever city, or that Kardashian nonsense), then there’s plenty to like about Tiger King. You have a group of larger than life characters – namely, Joe Exotic – doing awful, no-good, terrible things. There’s murder-for-hire, polygamy-a-plenty, toothless husbands who do interviews shirtless for some reason, a zoo worker missing a hand after a run-in with one of the animals, and another staffer who lost his legs but not because of the animals! Tiger King has it all!

Since pretty much everyone has already binged this series, I don’t need to explain much about the plot. I will say that no one featured comes out looking good. No one.

The main storyline centers around Joe Exotic’s ongoing war with Carol Baskin. He runs a sketchy roadside zoo filled with tigers and other exotic animals; she owns a Big Cat sanctuary trying to shut down folks like Joe Exotic. Some might argue that Baskin is unfairly villainized by the series, which I don’t necessarily disagree with; that being said, the woman seems kooky, based on her own words and actions. I mean, that whole story about how she met her second husband while wandering the streets and only got into his truck once he offered to let her hold a gun on him – that’s just whacky. The mysterious disappearance of that same husband is explored in one episode. I have no idea if she had anything to do with it, but Joe Exotic gleefully accuses her of killing her husband and feeding him to the tigers. He even “sings” a song about it and films a video with a Baskin lookalike.

Some takeaways: I wish the animal abuse didn’t feel like such an afterthought. It would have been nice if the filmmakers did more to explain the laws that allow people like Joe Exotic, Jeff Lowe, and Doc Antle to run sketchy-as-Hell zoos in the first place. Also, am I the only one who never really caught on to what Carol Baskin’s missing husband did for a living? He was a millionaire, but they never really explain how he became one – was it real estate investments? That’s a problem that plagues the series throughout – the filmmakers spend so much time on crazy shenanigans when they could have been offering more thoughtful context.

Anyway, if you come away thinking Joe Exotic is a hero, think again. He’s clearly not.

Other shows to binge (also available on Netflix):
Dark – In this dark sci-fi thriller from Germany, kids start disappearing, but that’s just the start of the strange events in the small town of Winden. There’s time travel, multiple timelines that show characters at different ages, and so many twists and turns it’s hard to keep everything straight. I’m still not sure I totally get what’s going on, but it’s a fun ride.

Billy on the Street – I love watching this because there’s something nostalgic and comforting about watching Billy Eichner yell at strangers in New York before the age of social distancing.

Reading
With the Beatles by Haruki Murakami.
If you’re like me and can’t wait for the next Murakami book, check out this short story recently published in the New Yorker (February 2020).  It’s a nostalgic, bittersweet tale with all the typical Murakami magic: mysterious things happen in the midst of the mundane, and things are never as they seem.

We Have Always Lived in the Castle by Shirley Jackson
Originally published in 1962, this novel holds up well and is especially fitting for these crazy Quarantine times. It’s a dark, claustrophobic story about two sisters: Merricat, the mysterious narrator, and Constance, the elder of the two who hasn’t left their large estate in years. They live in a grand house set apart from the nearby village. About six years earlier, the rest of the family – excluding their Uncle Julian – died after being poisoned by arsenic.  Since Constance prepared the meal, the townspeople blame her for the poisoning and think she got away with murder. As a result, they shun what’s left of the family.

Merricat, Constance, and Uncle Julian lead a quiet, quaint life together, largely cut off from the rest of the world. When cousin Charles enters the scene, everything quickly changes. A fire in the house leads to a dramatic confrontation with the villagers. Much of the house is destroyed, but the sisters remain.

What’s most memorable about the novel is the voice of young Merricat, the narrator. She’s a complicated character you won’t soon forget. This book is Shirley Jackson at her magical best.

More Books for the Apocalypse:
Hard-Boiled Wonderland and the End of the World by Haruki Murakami Actually, anything by Murakami is a safe bet. How about a big giant book like 1Q84? It’s fantastic too! You have the time, so why not tackle it now!

The Penguin Book of Japanese Short Stories
Get lost in another culture during your downtime. This collection lead me to so many other Japanese writers to explore.

Fever Dream by Samanta Schweblin
This very short book left me breathless. It’s one of the few times I’ve had a hard time setting a novel aside, which worked out fine since it’s such a quick read. I hear it’s getting adapted into a movie by Netflix, so make sure to read the book first.

Music
I don’t listen to a lot of “new” music, though I love Tyler, the Creator’s Igor album, which came out last year. Key tracks: New Magic Wand, A Boy is a Gun, and Earfquake. I loved Igor so much I’ve really dived into the rest of his catalogue.  Check out his performance at the 2020 Grammys below:

Movies
I haven’t been watching many movies during the NYC Lock Down. I saw Little Joe, a weird film about a scientist breeding a new species of plant that makes its owner happy, sort of like an antidepressant .. but is the plant dangerously infecting those who come into contact with its pollen? In ways, this was like a more subdued version of Invasion of the Body Snatchers.

Here are some other movies coming up in my queue: Carnival of Souls, The Ice Storm (I haven’t seen this in years and look forward to re-watching it), Jojo Rabbit, and Portrait of a Lady on Fire. What are you watching next?