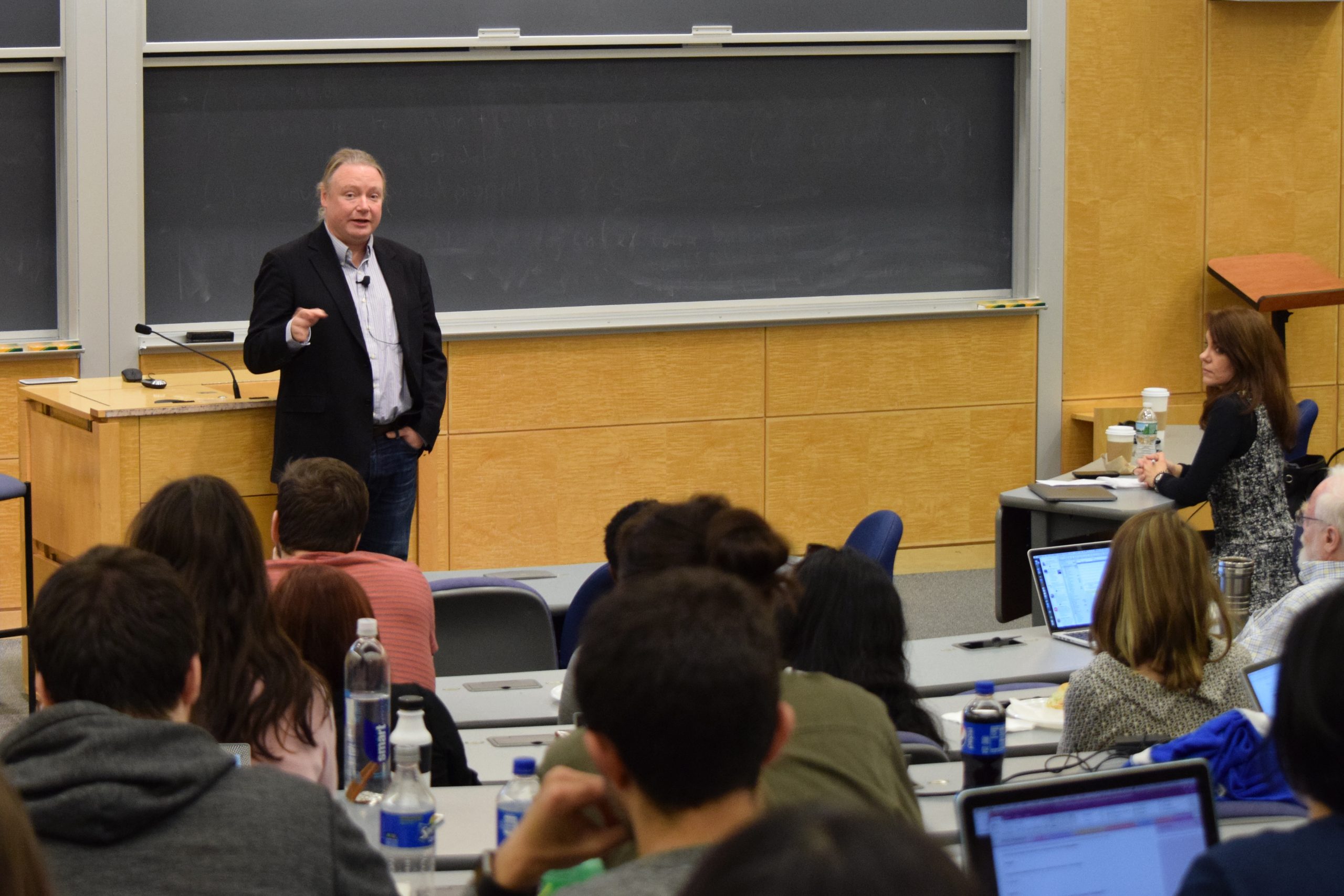 By Amanda Graham, an M.A. student in human rights

Blockchain is an updated way of documenting and verifying interactions on a digital platform. Up until now, we have given power of mediation to banks and other third parties to validate transactions. Blockchain is a digital distributed platform that validates transactions through algorithms. No third parties needed. Originally, blockchain was used to track digital currencies such as Bitcoin.  It has evolved into a system of trust through collaboration, its power slowly being leveraged beyond monetary transactions. The potential for disruption or transformation of industries has been the subject of recent conversations.  The Institute for the Study of Human Rights recently hosted Brian Behlendorf for a talk on Applying Blockchain Technology for Social Impact, kicking off a technology and human rights speaker series. Behlendorf is the executive director of the Hyperledger Project (among his many current roles) and spoke about the applications and inherent limitations of blockchain in current social impact projects.

The power of the relatively nascent technology, which can record the transactions of anything of value, has been leveraged beyond money. While the positive utilities of blockchain are clear, the potential to misuse or undervalue the technology also lies in the balance of its governance.

The blockchain platform can range from public to private ledgers with mixtures of technology and human governance. For this, Behlendorf explained the governance model of the Linux Foundation. Its ecosystem comprises a wide range of developers, providing a place for collaboration for other companies to build off of its technology. The Hyperledger Project has replicated this model into a “sort of standards body” that produces running code. To empower collaboration, the Apache Foundation–of which Behlendorf is a founding member–recognized that a common language, or code, makes correspondence between organizations a more accessible reality. Thus, the Linux Foundation has adapted toward an industry for alignment through common solutions. The visions of these organizations create a valuable, dynamic viewpoint in human rights. When looking at certain types of problems in the world, a mix of technology and human governance brings critical value to private blockchain networks in order to ensure multiple layers of protection for the privacy of individuals. Behlendorf explained healthcare as an example when sharing private records: When dealing with sensitive data that requires consent to be shared, having the privacy of individuals bound by technology and human governance provides an extra layer of security.

With this in mind, Behlendorf shared a few current social impact applications of blockchain that peak his interest:

Land titles: Factom started as a cryptocurrency company and saw the power of the ledger intrinsic to cryptocurrency. It began collecting land titles in Honduras on a blockchain database. In previous centralized databases, corrupt bureaucrats could change ownership with ease. With the new record system and no one at the center who can “change history,” loans can no longer be taken away with such ease and individuals “do not have to surrender to a single trusted third party.” As a result, the use of blockchain technology for recording land titles brings a conflux of interest between the financial industry, which looks to make loans, and human rights activists, advocating to maintain people’s rights to their land while protecting their dignity and sovereignty.

Diamond industry: Understanding the provenance of conflict diamonds has been the key function of the Kimberley Process. Blockchain technology allows for decentralized auditing procedures, where data retrieval is done on a platform visible to all parties in the diamond supply chain, rather than inconsistent and often inconclusive paper trails. This asset-tracking registry holds vast potential for whistleblowers and country-level or industry-level regulators. It also allows retail buyers to have confidence that their diamond is independently verified and not from a conflict region. As Behlendorf wisely shared, “You’re only as good as the data you collect on the ground.”

Fishing industry: The fishing industry is notorious for forced labor and illegal catches. GPS sensors on verified boats combined with data standards to pull information into a publicly distributed ledger creates a new system for accountability. This holds economic and safety benefits, allowing “wild caught” labels to be a trusted authentication for sustainability. Furthermore, this system provides a way to address and eliminate human trafficking from the industry when appropriate documentation does not accompany the product.

Human rights activism: In an environment of ‘fake news,’ The Guardian Project, a mobile phone security company, has created a system of collecting data during protests where one can record video and audio, or take a picture, which is verified by confirming that it was taken at a specific location and has not been modified.

Bringing a human rights focus to blockchain, the technology provides a unique system of metrics for achieving the Sustainable Development Goals. With a system of accounting that does not depend on a single government, NGO, or group like the United Nations, blockchain brings forth measurements that are not defined by any one entity. Behlendorf shared his interest in seeing these different entities as nodes on blockchain transactions. “If you put it in the same chain, then you make it a part of the economic cycle,” he said.

With such incredible applications at the forefront, it is imperative to maintain a trustworthy process on inbound data. This is where a sustainable system of governance comes in. Blockchain technology is a tool that supports interactions already taking place. By linking the power of humans and technology on a decentralized network, trusted information has the potential to change the world.

Amanda Graham is an M.A. candidate in Human Rights Studies at Columbia University. Her research focuses on the nexus of blockchain technology and the protection of human rights in supply chains.

Leave a Reply to Aleksandra